Mona Charen
|
Posted: Oct 27, 2017 12:01 AM
Share   Tweet
The opinions expressed by columnists are their own and do not necessarily represent the views of Townhall.com. 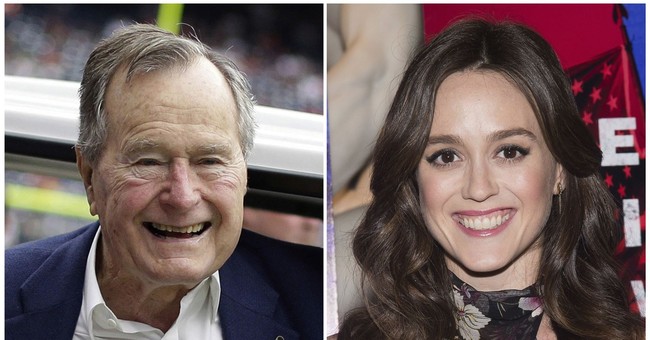 Let's look at two pictures side by side and see if we can tell how they're different. In one panel, we see a famous TV political analyst who apparently had the charming habit of pressing his erect, if clothed, penis against the bodies of young women who worked with and for him. That was Mark Halperin.

In the second panel, we have former President George H.W. Bush, in a wheelchair, age 89, posing for a photo with a number of others, including his wife Barbara, and an actress called Heather Lind. Lind says she felt moved to share her trauma after seeing the benefit concert for Hurricane Harvey relief in which five former presidents participated. It seems that people are unaware of President Bush's criminal record:

"When I got the chance to meet George H.W. Bush four years ago to promote a historical television show I was working on, he sexually assaulted me while I was posing for a similar photo.

"He didn't shake my hand. He touched me from behind from his wheelchair with his wife Barbara Bush by his side. He told me a dirty joke.

"And then, all the while being photographed, touched me again. Barbara rolled her eyes as if to say 'not again.'"

Fortunately, Lind immediately related the outrage to her "fellow cast-mates and producers": "(They) helped me that day and continue to support me. I am grateful for the bravery of other women who have spoken up and written about their experiences."

Ah, yes, the brave women who stand up to sweet, 90-something guys with a form of Parkinson's. The brave women who put those completely honorable, polite and respectful guys who were war heroes and served their country in their place.

Sorry, Ms. Lind, you're not brave. You're a twit. At the very worst, Bush did something tasteless. As you admit, the cameras were rolling the whole time. How awful can it have been? He's very old. People's judgment declines, especially if they're unwell. But you've made a fool of yourself for equating a pat on the tush from someone who couldn't possibly do you any harm to "sexual assault." You are either hysterical or cynical. I'm guessing the latter. You figured you'd jump on today's bandwagon and grab your moment in the spotlight. Instead, you've embarrassed yourself.

What must the women Halperin targeted think when they compare their situations with Lind's? A woman who had worked with Halperin in 2004, when he was political director of ABC News, described a meeting in his office:

"The first meeting I ever had with him was in his office, and he just came up from behind -- I was sitting in a chair from across his desk -- and he came up behind me and (while he was clothed) he pressed his body on mine, his penis, on my shoulder. I was obviously completely shocked. I can't even remember how I got out of there -- (but) I got out of there and was freaked out by that whole experience. Given I was so young and new I wasn't sure if that was the sort of thing that was expected of you if you wanted something from a male figure in news."

There are several reasons to take the story about Halperin seriously -- as MSNBC clearly does in announcing his temporary departure from the network. One is that five women have offered very similar stories. Another is that Halperin, while quibbling over details, does not really deny the allegations.

"During this period, I did pursue relationships with women that I worked with, including some junior to me. I now understand from these accounts that my behavior was inappropriate and caused others pain. For that, I am deeply sorry and I apologize. Under the circumstances, I'm going to take a step back from my day-to-day work while I properly deal with this situation."

Sorry, Mr. Halperin. You don't "pursue relationships" by grabbing women and pressing yourself on them. As much of a turn-on as it may be for you, it's a violation for them. You "now understand"? No. You always understood. Of course you did. You know that everyone deserves respect and that women, in particular, should never have their dignity compromised in the way you apparently compromised theirs.

What Halperin is accused of, if true, is squalid. The story about Bush, though, demonstrates how common sense flies out the window once the pack is in full cry.