Why Would You Want Putin as a Friend?

Mona Charen
|
Posted: Jul 21, 2017 12:01 AM
Share   Tweet
The opinions expressed by columnists are their own and do not necessarily represent the views of Townhall.com. 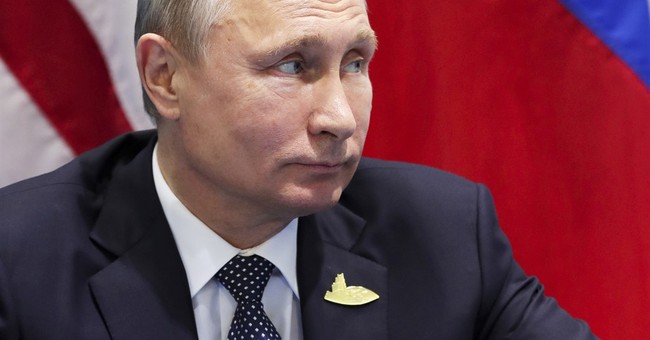 Leaving aside the question as to whether there was actual collusion between the Trump campaign and the Russian government during the 2016 election, it is undisputed that candidate Donald Trump was eager for a friendship between our two nations. The most recent accounts of the president seeking out more one-on-one time with Putin at the G-20 dinner -- using only a Russian translator -- is the latest evidence that this enthusiasm is undiminished.

President Trump has offered scores of comments about Vladimir Putin over the past four years, many times leaning over backward to doubt whether Putin was really guilty of assassinating reporters and opposition figures. Had Putin "been found guilty," Trump demanded. On many occasions, Trump gushed that Putin was "very nice" to him, and praised the dictator's "strength." On May 5, 2016, he told Fox News' Bret Baier, "I know Russia well. I had a major event in Russia two or three years ago -- Miss Universe contest -- which is a big, incredible event, and incredible success ... And you know what? They want to be friendly with the United States. Wouldn't it be nice if we actually got (along) with somebody?"

Perhaps this is a generalized wish for international peace. But if so, why didn't Trump show similar benevolence toward China? Instead, throughout the 2016 cycle, he repeatedly promised to label China a currency manipulator and threatened to impose high tariffs on Chinese imports.

You have to overlook a lot to imagine that Russia's intentions toward the United States and the West are benign.

Consider that Russia has blocked eight United Nations resolutions condemning Syria's use of chemical weapons. Russia was tasked, in an agreement the Obama administration blundered into, with overseeing the destruction of Syria's chemical weapons stockpile. As recently as April 2017, Bashar Assad gassed civilians with Russian connivance. In 2016, Gen. Phil Breedlove, supreme NATO allied commander for Europe, testified before Congress that not only was Russia not targeting ISIS (a favorite fantasy of Putin fans in the U.S.) but it was also intentionally bombing hospitals and other civilian targets in Syria to frighten more refugees into fleeing the country and swamping Europe. Thus has Russia "weaponized" the creation of refugees to destabilize Europe.

Anything that undermines the legitimacy of free and democratic nations in the West is guaranteed to get Russian support. Putin sows distrust and chaos, and he has shown himself willing to use "disinformation" -- an old Soviet technique -- as well as financial support for extremists of both left and right. Russia supports rightists, such as the Jobbik party in Hungary and the National Front in France, as well as left-wing parties, such as Podemos in Spain and Syriza in Greece.

The Russians have stood solidly behind their ally Iran, even selling the Islamic Republic sophisticated S-300 surface-to-air missiles in 2016, which would make any attack on Iran's nuclear facilities by Israel or the U.S. much more militarily risky.

On state-run media in Russia, the West, and particularly the United States, is portrayed as corrupt, hostile to Russia, expansionist and treacherous. The Russian television channel RT, which used to be called Russia Today but elected to drop the truth in advertising, traffics in conspiracy theories. The 9/11 attacks, it implies, were actually the work of the U.S. government. The Malaysian civilian aircraft shot down over Ukraine (which a Dutch-led investigation found was downed by Russians) was actually targeted by another mysterious plane. The United States, according to RT, is losing its democracy as a corporate elite takes over the country. The CIA is responsible for undermining Ukraine, and so forth. The ceaseless propaganda is having an effect. The percentage of Russians who have a "bad" or "very bad" opinion of the United States has risen from 34 percent in 2012 to 60 percent today.

Above all, Putin's aim is to undermine our trust in one another and in the possibility of knowing the truth. As he told RT journalists in 2015, the Kremlin's goal is to break what he calls the "Anglo-Saxon monopoly on global information streams." He pollutes Western traditional media with lies and laces social media with suspicion and hatred.

It makes you wonder: Why would we want good relations with such a figure?