Mona Charen
|
Posted: Jan 22, 2016 12:01 AM
Share   Tweet
The opinions expressed by columnists are their own and do not necessarily represent the views of Townhall.com. 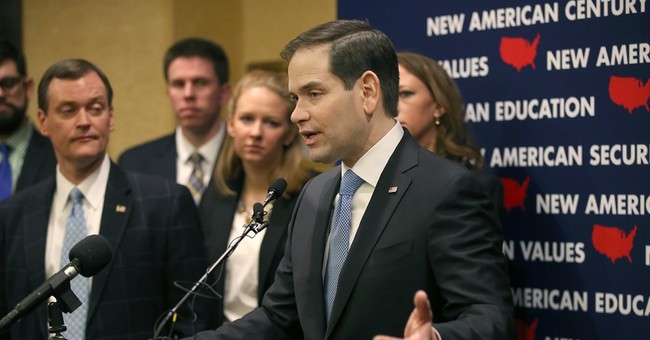 Trending
"I am not a member of any organized political party," Will Rogers quipped in the last century, "I'm a Democrat."

If today's Republican Party were organized, if its storied "establishment" were even a shadow of the leviathan its detractors claim, the world would look very different. Republican Party leaders would long since have organized an advertising campaign in the early caucus and primary states to show voters that Donald Trump is: 1) nothing resembling a conservative, 2) not a friend of the working class, 3) not a particularly successful businessman (despite inheriting a vast fortune, he's managed to clock four bankruptcies) and 4) temperamentally unfit to be president.

Instead, as FiveThirtyEight reports, the amount of money the big super PACs have spent on television ads against Donald Trump in the past month was zero. By contrast, the biggest target of super PAC negative ads was Marco Rubio. Of 47 filings in the past month, 35 were anti-Rubio.

The favorite target of conservative ire is the left-leaning news media. Yet for the past six months, conservative outlets have joined with liberal ones to offer Donald Trump all the free publicity he could ask for. They've strewn his path with roses as he flayed one genuine conservative (Rick Perry, Bobby Jindal, Scott Walker) after another, withholding their bouquets only when Trump reared finally (as he was bound to do) on Ted Cruz. Cruz's strategy to praise Trump until Trump attacked him may have been good politics, but it fits Winston Churchill's definition of an appeaser as one who "feeds a crocodile, hoping that it will eat him last."

I understand, or think I understand, why liberal media types have been so cordial to Trump. He's ratings gold and they suspect that he would be the least-viable Republican nominee. As Nate Silver noted, Trump has the highest unfavorable ratings of any candidate of either party. Though his approval has improved among Republicans since last June, it has declined among independents and Democrats, leaving him still the candidate least likely to win a general election.

Polls this far from an election are not dispositive by any means, but they tell us something. So what explains the behavior of conservative radio and television hosts? I'm open to suggestions.

Marco Rubio, arguably the most electable Republican candidate, has been hammered by Jeb Bush's super PAC for months. What's the gravamen? Rubio missed some votes in the Senate because he's running for president. Bush is firing a slingshot. He cannot go after Rubio's one weakness, his immigration stance, because Bush shares it.

Rubio is the most articulate, thoughtful, inspiring and consistently conservative of any Republican running. His message that "America owes me nothing but I owe America a debt I can never repay" is in the best tradition of this land of opportunity. He has the highest favorability ratings among all voters of any Republican (except Ben Carson). Rubio has backed off his support for the kind of immigration reform embodied in the Gang of Eight bill. So, should this be his Achilles heel?

Trump, insofar as he has positions and not mere blurts, was an immigration dove as recently as 2013, and Ted Cruz unambiguously endorsed increasing (that's right) the number of legal immigrants (because, he explained, permitting high-skilled immigration is pro-growth) as well as providing a path to legalization for those already here. He told Princeton's professor Robert George in 2013 that his amendment "would mean the 11 million who are here illegally would all come out of the shadows and be legalized."

Cruz now says that his amendments were "poison pills" designed to reveal the Democrats' insincerity. But listen to his own language at the time: "I want to see common sense immigration reform pass. But the only way to do so is to find a middle ground, and right now they're unwilling to do so, and I think many of the Hispanic advocacy groups in particular are being played. They're being played by partisans who want the deal to fail, because they want to use it as a campaign issue rather than to pass it. And I hope that strategy doesn't work."

He opposed offering citizenship, which Rubio supported, but he now adamantly denies that he favored legalization at all. That's borderline Clintonian. Of all the Republican candidates, only Rick Santorum seems to have maintained a consistent hard line about immigration.

Cruz has shown integrity on other issues (like ethanol subsidies) and deserves fair consideration from conservatives. But Rubio is being unfairly tarred for his only lapse, and one in which he was hardly alone. Meanwhile, the vulgarian unguided missile atop the polls gets a pass from everyone about everything.