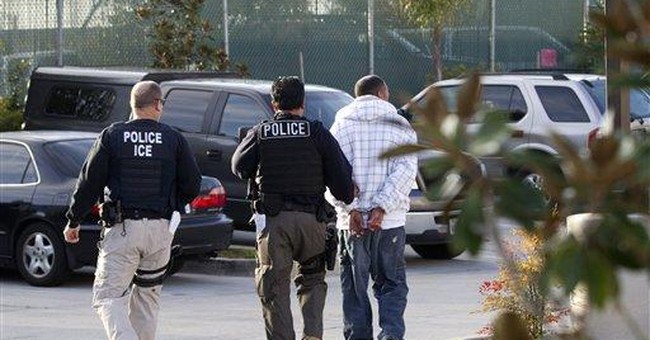 Trending
Nine years ago, aboard a National Review cruise, I debated immigration policy with my colleagues and the cruisers. It was a good discussion that touched all the familiar bases. Are there really jobs Americans won't do? Are big business and big agriculture enmeshed in a corrupt bargain with liberal Democrats whereby business gets cheap labor and Democrats get new voters?

I argued then, as I do today, that there are many serious immigration reforms we ought to be undertaking. We have a valuable commodity -- the right to live and work in the U.S.A. (and in some cases to become a citizen) -- and we should not be handing it out to just anyone. We should swiftly deport criminals even as we should be more welcoming to those who earn PhDs or bring other skills. But I also argue that illegal immigration, particularly from Mexico, is steeply declining and likely to continue to; that even most Republicans, to say nothing of the larger electorate, are moderate on immigration; and that immigrants tend to work hard.

I respect the restrictionist position, but there is one argument they advance that I do not understand. They say that unless we stop immigration -- legal and illegal -- there is no chance for conservative governance or for the Republican Party. I say, unless Republicans refrain from causing a stampede to the Democrats by denigrating Mexicans as "rapists" and urging "deportation" (even of American citizens!), we will not win another national election.

The demographic reality is already baked into the cake. The share of the electorate that considers itself Hispanic grew by 49 percent between 2000 and 2012, compared with 5.8 percent growth for the non-Hispanic portion. Hispanics are disproportionately young. The median age for native-born Hispanics is just 18, compared with 42 for non-Hispanic whites. The vast majority of Hispanic youths (93 percent) are native-born and thus eligible to vote when they turn 18, as 800,000 Hispanics do yearly. Generational replacement alone could double the number of Hispanic voters by 2032.

While it's true that Hispanics remain only 10 percent of voters for now, their share of the electorate is growing in key swing states. In North Carolina, for example, the Hispanic share is projected to increase from 3.1 percent (2012) to 4.5 percent (2016). The white percentage is expected to drop by two points. Assuming 2012 turnout rates, North Carolina, which voted for Mitt Romney, would go to the Democrats. The picture is similar in Florida, Nevada, Colorado and Virginia.

Hispanic voter participation rates are among the lowest of any race or ethnic group. Only about half of eligible voters participate in presidential years and many fewer in off years. But that could change very fast. The presence of Barack Obama on the ballot shot black voter participation rates through the ceiling in 2008 and 2012. A Hispanic Democratic nominee might do the same for that demographic -- as could the presence on the Republican ticket of a candidate who favors deporting American-born children of illegal immigrants.

Nor should they. How about just appealing to them as Americans and not insulting them?

Consider the results of recent races. Greg Abbott, governor of Texas, won 44 percent of the Hispanic vote. Georgia's Republican Gov. Nathan Deal won 47 percent of Hispanics, as did Gov. Sam Brownback in Kansas. In New Jersey in 2013, Gov. Chris Christie got 51 percent of the Hispanic vote. They were all winners. As Pew's Mark Hugo Lopez explained in 2014, "It's not a massive phenomenon, but Latinos identified less with the Democratic Party, and a growing share identified with Republicans." It is not necessary for Republicans to win a majority of Hispanic votes to win elections. What they cannot survive is a trend in which African-American sized percentages of Hispanics vote Democrat.

But that was in a year when Republicans were not at war with immigrants.

Everything depends on tone. With an inclusive message, there's no limit to what Republicans might achieve, even on restricting immigration. But if the Trump claxon comes to define Republicanism, the list of those fleeing will start with Hispanics, but won't end there. What's left will be moribund.