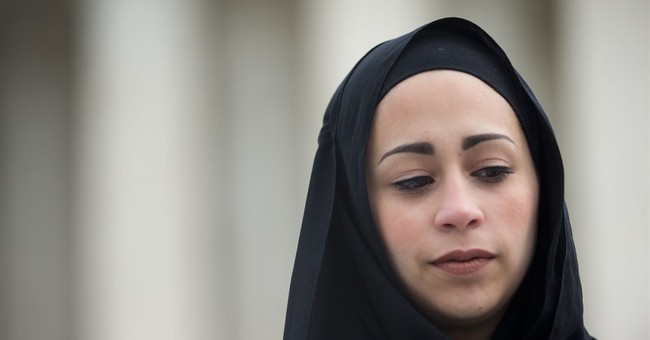 Trending
"Of all the dispositions and habits which lead to political prosperity, religion and morality are indispensable supports. -- George Washington

Until almost literally the day before yesterday, it was universally acknowledged that religious faith and expression were bedrock American freedoms -- enshrined in the Constitution, protected in law and honored in custom. But now, because the left has been victorious in convincing the elites that upholding traditional marriage is low bigotry, religious freedom will have to yield.

Not all religious freedom, though.

Just last month the Supreme Court heard arguments in the case of Elauf v. Abercrombie, which concerned a young Muslim woman who was denied employment because she wore a headscarf. Abercrombie has a policy against headwear. The argument turned, as it should in our republic, on how Abercrombie and others should handle the delicate matter of religious garb. Should the employer ask, and possibly commit ethnic and racial profiling, or should the employee be under an obligation to volunteer that his or her appearance was dictated by religion? Such are the cases we navigate in a nation that respects individual conscience and also seeks to avoid the appearance or reality of religious discrimination.

Conservatives would probably side with Elauf because they respect religious liberty. Progressives would favor her, too, but for a different reason: because Muslims are among the groups that can (at least in the liberal imagination) be defined as victims. Victim status alone determines the equities in every dispute. If a halal caterer declined to service a gay wedding (which they almost certainly would, if asked), progressives would spiral into confusion and doubt. Which victim group is superior?

But it doesn't. There is no analogy in American history to the treatment of blacks. No other group was the victim of centuries of slavery, abuse, rape, displacement, cheating, denigration and legalized second-class status. As The New York Times' Ross Douthat noted, "Both Jim Crow and the means we used to destroy it are, well, legally and culturally extraordinary." That's exactly right. There is no analogizing the black experience to other groups. To extirpate the anti-black virus, we had to give enormous and even dangerous power to the federal government, trample upon people's rights, regulate voting in all of the southern states, and much more.

The power we gave the state to fight anti-black discrimination should have been seen as a necessary evil to cope with a unique malice. Instead, for progressives, it was like sharks getting a scent of blood. With victimhood comes power!

And so they argued, ludicrously, that women were just like American blacks, persecuted for centuries by "sexism" and needing affirmative action, unlimited abortion, set-asides, lawsuits, and a school curriculum designed to remake the male sex in a new image to repair the damage.

Sex roles changed due to technology (the pill and labor-saving devices) and increasing wealth (which permitted smaller families). We can cheer or lament these changes, but in no reasonable universe is it possible to compare relations between men and women with the black experience -- a victim class and a victimizer, discrimination and contempt on one side, and suffering and humiliation on the other.

And so it went with every new victim group, none of which was comparable to blacks. The left decides who is a sympathetic victim (transgenders, yes; Ayaan Hirsi Ali, no), and in every case the opposition must not just be defeated, but crushed, silenced and exorcized.

On university campuses, "victims" are using their status, i.e. their power, to silence the expression of differing views. Dozens of religious groups are losing their university accreditation because they choose leaders based on belief. A Marquette professor was suspended and may have his tenure revoked for criticizing a same-sex marriage advocate's quashing of dissent. An Oxford debate on abortion was shut down because feminists complained that two humans "without uteruses" were discussing it. Besides, they said, hearing opposing views would threaten the "mental safety" of the ladies.

The racism analogy is a loose cannon -- crashing around the deck of America and threatening the mainmast.