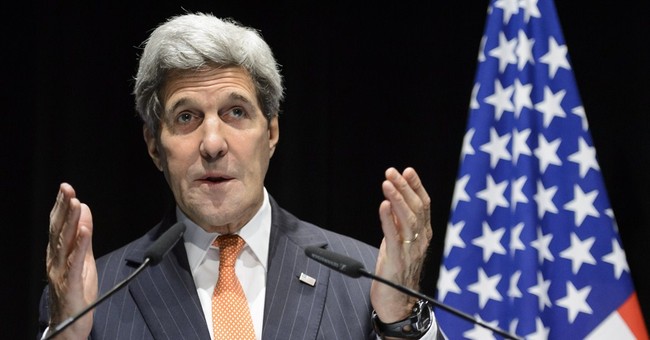 Maybe I'm too sensitive, but when a foreign autocrat leads his people in chants of "Death to America," I take it personally.

President Obama and Secretary of State John Kerry apparently don't. The chant, which became a staple of the Islamic Republic during the 1979 revolution, is not a relic of the past. Just last weekend, at a rally in the northern part of the country, Supreme Leader Ali Khamenei was interrupted by the chant as he was denouncing American "lies" and "arrogance." He smiled and responded, "Of course, yes, death to America, because America is the original source of this pressure."

Some in Iran have urged that the "Death to America" chant, common after Friday prayers and at political rallies, be downplayed during negotiations over a nuclear deal, but the IRGC (Iranian Revolutionary Guard Corps) rejects this, insisting, according to the semi-official Fars News Agency, that the United States "is still the great Satan and the No. 1 enemy of the (Islamic) revolution, and the Islamic Republic and the Iranian nation..."

Sen. Tom Cotton, R-Ark., responded, "When someone chants, 'Yes, certainly, death to America,' we should take him at his word, and we shouldn't put him on the path to a nuclear bomb."

We are left to wonder at the equanimity among high-ranking members of this administration at the unyielding hostility of the Iranian regime. In late February, Iran blew up a full-size model of the U.S.S. Nimitz, an aircraft carrier, in the Persian Gulf. The supreme leader's representative on the IRGC, Ali Shirazi, recently boasted, "When we look at the Islamic world, we see that the culture of the Islamic Revolution has reached all countries and all Muslims throughout the world. ... We shall not rest until we raise the flag of Islam over the White House."

A few days later, Obama responded by sending Nowruz greetings to the "people and leaders of Iran" and quoting a Persian poet as saying "many a flower will bloom while you will be in clay."

Throughout the protracted negotiations between the P5+1 and Iran, the Obama administration has assured Congress that "no deal" was "better than a bad deal." They've offered pledges that Iran's centrifuges would be limited to 500, that the PMDs (possible military dimensions) of its nuclear research would be fully disclosed, that the facility at Fordo (built into a mountain) would be shut down, and that snap inspections would be part of any agreement. "We're not blind, and I don't think we're stupid," Kerry once assured skeptics.

Congress gave the administration "breathing room" -- but U.S. negotiators have backed away steadily from each of their positions. There is now talk of 6,000 centrifuges or more. The Wall Street Journal reports that U.S. negotiators are scaling back their demands for disclosure of PMDs (something the International Atomic Energy Agency had also demanded). Without disclosure of military dimensions, inspections (notional in any case) will be hampered. David Albright of the Institute for Science and International Security told The Tower magazine, "A deal that does not include Iran addressing the IAEA's concerns about the past and possibly ongoing military dimensions of its nuclear program would undermine the verifiability of the deal, and thus the credibility of a comprehensive deal." Fordo will remain open, and its centrifuges will spin.

The French government has protested that the U.S. is retreating (think that one over for a minute). France's foreign minister is reported to have said that "the United States was really ready to sign just about anything with the Iranians." The French ambassador to the U.S., Gerard Araud, tweeted, "For France, any agreement to be acceptable will have to give concrete guarantees on all issues. We won't bypass any of them."

Each and every news leak out of Lausanne depicts the U.S. walking back its demands. Just watch the faces of the Iranian negotiators. Their smiles tell the tale.

It is impossible to recall a more dangerous or foolish set of assumptions by an American president in modern American history. Death to America might become more than a chant.