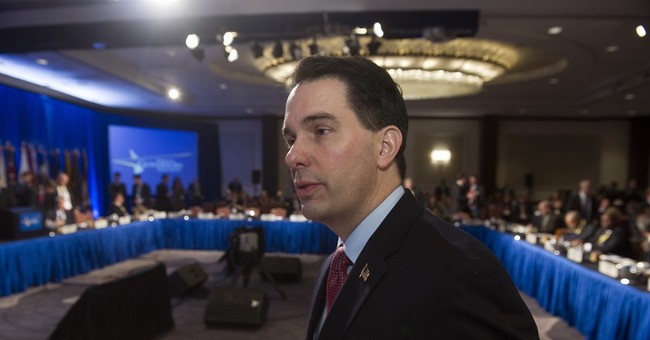 Gov. Scott Walker has leapt to the top of polls in Iowa. As day follows night, he has moved to the center of the liberal press's crosshairs. This is the world we inhabit: When a Democrat is perceived as popular, the press discovers layers of humor and elan we never suspected. When a Republican is gaining strength, the press sharpens its bayonets.

Based on his response to trap-door questions in the past few days, we've been instructed that Walker a) is a crypto young Earther (or, just as bad, a panderer to same); b) that he ought to have answered the question regarding President Obama's faith with a resounding affirmation of Obama's fitness for sainthood; and c) that he is some sort of coward for not grabbing Rudy Giuliani by the scruff of the neck and escorting him off stage when the former mayor questioned the president's love of country.

Let's stipulate that Walker gave B-minus answers to D-minus questions. I agree with Ramesh Ponnuru that, while questions about evolution have zero relevance to governing, Republicans ought to be prepared to answer them without "punting." (A raised eyebrow to show you understand the game afoot wouldn't be misplaced.) For a politician, the only seemly way to answer a question about something as intimate as someone else's faith is, "I can't see into other people's souls. Can you?" (As a non-politician and reader of "Dreams from My Father," I have my doubts about Obama's piety, just as I never believed he opposed gay marriage -- but that's neither here nor there.)

Presumably, Walker, a talented pugilist and no novice to hardball politics, will get his national sea legs soon. But the fuss over the Giuliani comments is a reminder of the ferocious, unrelenting bias of the press. When Obama called President Bush "unpatriotic" in 2008, it was a non-story, just as then Sen. Joe Biden's description of Obama as "the first mainstream African-American who is articulate and bright and clean" went undenounced.

Any Republican who imagined that the sickening double standard the press applies to Democrats and Republicans would have been sated by six years of genuflection to Obama should now be fully awake.

Still, most members of the press are partisans, and one cannot avoid them completely. Republicans should accordingly come prepared to any press encounter with a list of questions they would ask Democrats. If the journalist doesn't ask, the candidate can offer suggestions. For example:

1) You say you're in favor of "comprehensive immigration reform." How many legal immigrants should we welcome every year? As many as can get here? Do you think that presents any problems for unskilled Americans who are having trouble finding work?

2) Democrats say they want to ensure that women get equal pay for doing the same work as a man. Do you know the date when that became federal law? (1963)

3) Obamacare was passed to solve the problem of the uninsured. Yet the GAO projects that 31 million will remain uninsured by 2021. What would you propose to solve that problem? Do you favor forcing doctors to see Medicaid patients as some Democrats propose?

4) President Obama's team praised the Veterans Administration as the model of efficient government health care. In light of the scandals that have come to light in the VA, do you agree? If not, can you point to a government-run health system you admire?

5) Dodd/Frank was passed to solve the "too big to fail" problem. Yet since passage, the biggest banks have gotten bigger, while community banks have withered. The five largest banks by assets now hold 44.0 percent of U.S. banking assets and 40.1 percent of domestic deposits -- up from 23.5 percent and 19.5 percent, respectively, in early 2000. With the biggest banks having gotten even larger, was Dodd/Frank a mistake?

6) A recent survey by Education Next found that a strong plurality of African Americans, 47 percent, support charter schools, while just 29 percent oppose them. Do you support vouchers and charters even if the teachers' unions oppose them?

Finally, for some candidates:

7) You opposed the Born-Alive Infants Protection Act. How does what you support differ from what sent Dr. Kermit Gosnell to prison for first-degree murder?