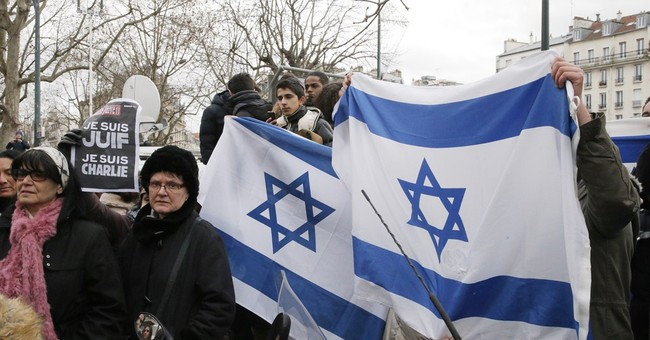 By savagely attacking and murdering writers and cartoonists as well as Jewish shoppers, French Islamists clarified something that many in the West have deceived themselves about: that the war we are engaged in is a war of ideas. Islamists have once again reminded us that freedom itself is their target.

This discomfits the left. They prefer to pretend that Islamist violence (when they acknowledge it at all) springs from unemployment, poverty or, most frequently, colonial oppression. Most leftists, and some on the libertarian right, believe that American responses to Islamists' attacks -- ranging from the wars in Iraq and Afghanistan to NSA wiretapping -- are the causes of the murderous rage that has claimed thousands of victims on every continent (10,000 in 2013 alone) and has in the past three months plunged Australia, Canada, Israel, Pakistan and now France into agonies as civilians (including children) have been coldly massacred in the name of Allah.

George W. Bush was mocked for saying, "They hate our freedom." Salon magazine sneered, "The utter absurdity of people halfway around the world being angered by another nation's self-proclaimed 'freedom' further adds to the meaninglessness of Bush's statement."

At the Paris demonstration, protesters carried enormous pencils and pens, symbols of the press freedom these Islamists would extinguish by law if they could, and through murder and intimidation in the meantime. Bush's statement doesn't look "meaningless" today, does it?

Liberals and the left similarly disarmed themselves morally and intellectually during the Cold War. That was a battle of ideas between two post-Enlightenment ideologies: the freedom-embracing democracies versus the tyrannical Marxist/Leninists. Throughout that 75-year struggle, the left consistently failed to defend the values of the West (including freedom of thought and speech), preferring to see the conflict as a "misunderstanding."

Just as they frequently gave the Soviets and other communists the benefit of the doubt during the Cold War, the left today refuses to grapple with the meaning of Islamist ideology. They see only bigotry in Western concern about such fanaticism. This blinds them to the struggles within Islam.

Islam has been ravaged over the course of the past century by the rise of radical extremists. Such views always existed, but the founding of the Muslim Brotherhood in Egypt in 1928 transformed the ideas into a movement, while the discovery of oil in Saudi Arabia permitted that regime to proselytize similar radicalism worldwide. Extremist Islamists (those who reject the separation of mosque and state) now comprise significant minorities in every Muslim country on the globe, rule Shia Iran, and have friendly governments or quasi governments in Turkey, Gaza, Tunisia and many other nations.

Islamism is a paroxysm of rage by extremist Muslims determined to make war on all (including Muslims) who believe differently. They've attacked Christians throughout Europe, Africa, the Americas and the Middle East, Jews worldwide, Hindus in India, and Buddhists in Thailand, Myanmar and China, among other places.

What are self-respecting democratic pluralists to do in the face of this threat? In the first place, acknowledge the reality of the problem rather than making it politically incorrect to mention it. Second, make common cause with Muslim people and leaders who are battling the Islamists. As the Middle East scholar Daniel Pipes has argued for decades: "Radical Islam is the problem. Moderate Islam is the answer."

Rather than align with the forces in the Muslim world that reject extremism, President Obama has seemed eager to ingratiate himself with extremists. He lent support to former Egyptian President Mohamed Morsi of the Muslim Brotherhood, and has alienated his successor, President Abdul Fattah al-Sisi, though Sisi has taken the most significant step of any Muslim leader in the world, calling for a "religious revolution" and cautioning that radical Islam, "that corpus of texts and ideas that we have sacralized over the centuries, to the point that departing from them has become almost impossible, is antagonizing the entire world!"

Queen Rania of Jordan, too, has spoken up, urging that moderate Muslims create "a new narrative." A group from Morocco has founded "Not in My Name," a website that condemns ISIS, Jabhat al-Nusra, al-Qaida, Hamas, Hezbollah and Islamic Jihad. The Kurds are on the front lines fighting ISIS. Israel battles terrorists on a daily basis. All need and deserve vigorous U.S. support.

Instead, the Obama administration waits, hat in hand, in Supreme Leader Ali Khamenei's anteroom, hoping for a nuclear deal. Robert Frost said it best: "A liberal is a man too broadminded to take his own side in a quarrel."