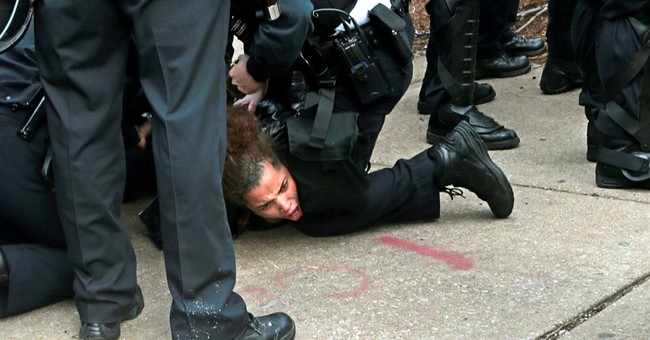 In the immediate aftermath of Michael Brown's shooting, before we learned that he had not been shot in the back, that he had not had his hands up, that he had, in fact, attempted to grab Officer Wilson's gun, I wrote in favor of requiring more police to wear body cameras. Assuming nothing about Wilson's guilt or innocence, I wrote, "Cameras cannot repeal aggression, bias, rage or stupidity -- but they can certainly diminish them. And with cameras, justice for the guilty -- cop or civilian -- is more attainable."

In the wake of the grand jury's decision not to indict Wilson, Brown's parents have called for police to wear body cameras. I remain in favor, but the outright denial displayed by so many opinion leaders in this case makes me doubtful that even video evidence would be enough to calm the next storm if the victim of violence is black and the perpetrator white.

There was video evidence in this case: the convenience store robbery and strong-arming of the owner. Any fair-minded person would concede that while the footage didn't prove that Brown attacked Wilson a few minutes later, it did severely undermine the legend that was being spun of Brown as a "gentle giant." Yet most commentators on the left either ignored the store footage or suggested it was irrelevant. Missouri's governor denounced the release of the video as a form of character assassination.

For reasons best known to themselves, Ferguson authorities chose to withhold Wilson's account of the fatal encounter for many weeks. Arguably, this silence permitted the legend of a brutal, unprovoked attack on an "unarmed black man" to proliferate more than it otherwise might have.

Still, by October, word had leaked to a number of news organizations about the autopsy reports (there were three) on Brown's body. The reports proved conclusively that Brown was not shot in the back, did not have his hands up and had been shot at close range in one hand (consistent with Wilson's story about a struggle for his gun in the patrol car). He also had enough THC in his body to cause hallucinations.

Again, fair-minded people, presented with this evidence, would give Wilson a hearing.

Finally, in the weeks leading up to the grand jury's decision, reports surfaced that multiple African-American eyewitnesses corroborated Wilson's account of the events that day in their testimony. There was a bullet hole in the police car. Brown's DNA was found inside the police car and on Wilson's body.

Lovers of the racist-cop narrative swatted these inconvenient facts away, noting that there was "conflicting testimony." Well, yes. But the testimony of those whose accounts were at variance with the forensic evidence -- such as those who testified that Brown's hands were over his head when he was killed -- is not as trustworthy as that of those whose testimony was consistent with the other evidence.

So who really failed Brown? The "system" that refused to railroad an innocent cop to appease the mob, or the aggrieved parents themselves?

One must sympathize with parents who have lost a child. The image of Lesley McSpadden's tears is piteous. But her refusal to face reality is also documented. Responding to Wilson's interview, she said, "I don't believe a word of it. I know my son far too well. He would never (attack a cop), he would never provoke anyone to do anything to him, and he would never do anything to anybody." But we have video footage of what happened at the convenience store. Doesn't that count as provoking someone?

Imagine if footage surfaced from a security camera or cellphone somewhere of Wilson making a racist remark. Would those who stoutly deny that the convenience store video tells us anything relevant about Brown say the same? Of course not. The outcry would shake the rafters. In America today, not all evidence is created equal.

I'm still for cameras on cops. Some police officers abuse their authority, and cameras would diminish that. In other circumstances, the video would provide police with proof that their actions were justified.

But we cannot imagine that body cameras will solve the "Ferguson problem." Too many are too invested in the white racism morality play to let facts -- even videotaped facts -- get in the way.