Hispanic Voters and the American Dream 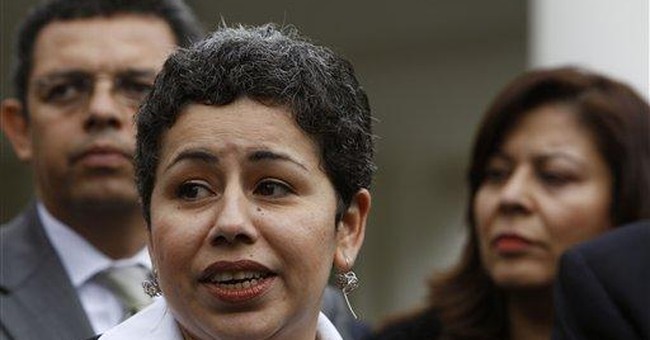 An off-year election is an opportunity for the winning party to learn the wrong lessons. Such an opportunity beckons for Republicans. They are poised to win elections, and may possibly gain control of the Senate, in part because the most loyal Democratic constituencies -- single women, blacks and Hispanics -- tend not to participate as energetically in non-presidential years. (Though the spending bomb that Democrats are about to detonate may minimize Republican gains.)

Add to that the changing public mood about immigration following the sloppy influx of thousands of children earlier this year and possible Hispanic resentment of President Obama's broken promises on immigration reform, and Republicans seem to get a holiday from grappling with the challenging question of expanding the party's appeal among the nation's fastest growing minority.

Mike Gonzalez, writing in National Affairs, offers some timely reminders about how Americans from Spanish-speaking nations came to be seen as a "brown" minority group in the first place.

Though "Hispanics" have lived in the U.S. throughout our history, the big wave of immigration -- legal and illegal -- began with the termination of the Bracero program and the passage of the Immigration and Nationality Act in the mid-1960s. Unlike other immigrant groups such as Germans, Italians, Poles and Irish who had arrived in an America that sought to assimilate them as quickly as possible, Spanish-speaking immigrants found a quite different environment. Rather than being encouraged to learn English and to think of themselves as American, the new immigrants, from very different societies, were encouraged to think of themselves as a class -- Hispanics -- and a persecuted minority at that.

Title VII of the Civil Rights Act, along with other government programs, required employers and others to maintain statistics about "Negroes, Spanish-Americans, Indians and Orientals." The "people of color" idea was born. Individuals varying tremendously in ethnicity, history and traditions -- Chileans have little in common with Puerto Ricans -- to say nothing of skin color, were lumped into the basket eventually called "Hispanic" or "Latino." Boxes were checked.

Though there was nothing like the history of prejudice and discrimination against Spanish-speakers that there had been against blacks, the template of persecuted minority was liberally applied. Schools, once the avenue of "Americanization" for immigrant children, became instead vehicles for instilling a minority mindset, complete with ethnic separatism. Hispanics were deemed eligible for affirmative action in a number of areas. As Linda Chavez has written, "The history of American ethnic groups is one of overcoming disadvantage. ... Ultimately, entitlements based on their status as 'victims' rob Hispanics of real power."

The dance of color consciousness has a disgraceful past and a destructive present. When Italians and Poles first came to America, some natives did not consider them "white." Today, most "Hispanics" check the "white" box on the Census even as progressives keep pumping the "people of color" handle.

Democrats also welcomed Hispanics to a world of government assistance and to the poverty trap of dependency. According to Pew surveys, only about 18 percent of newly arriving immigrants from Spanish-speaking countries are from single-parent families, two points higher than for white Americans. By the third generation, that number spikes to 38 percent. For Hispanic children born today, the illegitimacy rate is a devastating 53 percent. "These statistics," Gonzalez writes, "must be laid at the feet of cultural norms learned in this country, which clearly have shaken many immigrants' traditional views of marriage."

The Obama government has been particularly assiduous in using public funds, through advertising on Spanish language radio for one thing, to break down traditional immigrant resistance to participation in programs like SNAP.

Conservatives and Republicans face an uphill climb with a constituency they have by turns resented, ignored, courted and insulted. Gonzalez recommends at least two avenues of approach, one practical and the other emotional. The practical suggestion is school choice. Many Hispanic children find themselves stuck in terrible schools, and choice is popular with these voters. The emotional appeal is a straight-up assault on the minority mindset. Gonzalez cites as a model Margaret Thatcher's poster from her 1983 campaign. It featured the image of a black businessman. The tagline: "Labour says he's black. Tories say he's British."

That would be an excellent way to start.