Should Boys Be Wrestling Girls? 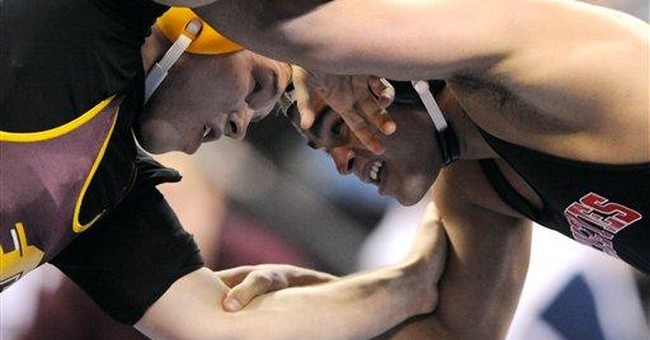 Around Washington, D.C., if you mention Iowa, the first thing that will pop into most people's minds is "caucuses." But in Iowa, if you asked a local about the matchups, he'd most likely assume you were talking about wrestling. That's right, the non-metaphorical, sweaty, rough-and-tumble on the mat sort of wrestling.

This year's Iowa state championships attracted attention nationwide when the promising high school sophomore Joel Northrup (the fifth-ranked wrestler in the state) defaulted on his first match. He had drawn Cassy Herkelman, a female freshman, as his opponent, and he could not, in good conscience, wrestle a girl.

Northrup's statement was a model of clarity and simplicity: "I have a tremendous amount of respect for Cassy and Megan (Black, another female wrestler who made it to the state championships) and their accomplishments. However, wrestling is a combat sport and it can get violent at times. As a matter of conscience and my faith, I do not believe it that it is appropriate for a boy to engage a girl in this manner. It is unfortunate that I have been placed in a situation not seen in most high school sports in Iowa." Had he not declined to wrestle Herkelman, he might have won it all.

The New York Times, the AP, and other national news organizations noted that Northrup's father is a minister -- the suggestion being that such peculiar and backward views as the young man expressed must be chalked up to a religious sensibility. Most of the coverage stressed the "girl against the old boys network" angle. The Times headline captured the tone: "On Wrestling Mat, Girls Still Face Uphill Struggle."

But not every issue fits neatly into the little boxes that New York Times headline writers like to arrange. The liberal template is always that conventional practices -- like not having boys and girls wrestle one another -- are obsolete now that we believe in pure sexual equally. Clinging to the outmoded notion that wrestling might be one sport best kept separate is evidence of sexism.

Rick Reilly, writing at ESPN.com, responded to the Rev. Northrup's view that "we believe in the elevation and respect of woman" with contempt: "That's where the Northrups are so wrong. Body slams and takedowns and gouges in the eye and elbows in the ribs are exactly how to respect Cassy Herkelman. This is what she lives for. She can elevate herself, thanks."

Are we really sure we want to obliterate the last traces of chivalry in young men -- to stamp out every trace of protectiveness from the male psyche?

Even if we agree that young women should be body slammed and gouged and hurt if that's what they've signed up for, you have to be living in a dream world not to face the other reality of co-ed wrestling: It puts the boy at a disadvantage.

Not only is any well brought up young man going to hesitate to use his full strength against a young lady, he is also going to have to be so, so careful about where he touches her. The genital areas of both sexes are off limits, obviously. But girls also have breasts. So the boys have to be very careful not to grab the girl in such a way as might cause his hands to touch her breasts if she moves in an unexpected direction. One finger slip and the wrestler becomes a sexual harasser, no? The girl, by contrast, can push and shove and grab the upper body of her opponent without impediment.

And why are boys being put in this awkward situation? Because a small minority of high school girls has decided to wrestle. According to the National Federation of State High School Associations, more than 275,000 boys competed in wrestling during the last school year -- compared with only 6,000 girls. Five states -- California, Hawaii, Texas, Washington, and Tennessee -- sponsor girls-only high school wrestling tournaments. In the other states, girls are asked to compete against boys.

Supporters of co-ed wrestling insist that sex is the last thing on the kids' minds when they're in the arena, which is almost certainly false. These are, after all, teenagers. Even when not in close proximity to the opposite sex, even when not coming into physical contact with the opposite sex at all, a teenager will spend a generous amount of time thinking about sex.

Joel Northrup did the honorable thing by bowing out and refusing to wrestle a girl. He cited his conscience and his faith. They have been better guides for him than a misplaced gender neutrality has been to the state of Iowa.