Not Just One Terrible Idea, But Two! 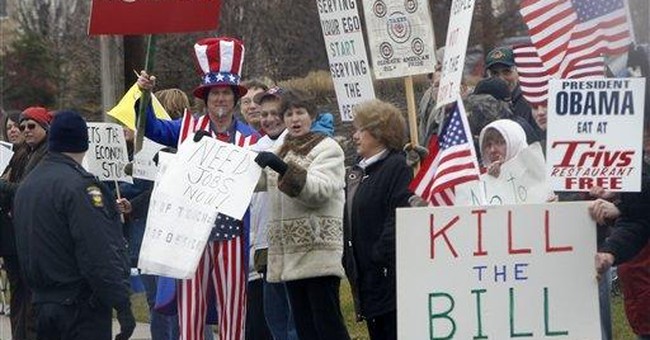 It's interesting that the Democrats are attempting to roll two of their highest priorities into one bill this month. The labyrinthine legislative legerdemain called health care reform now includes a reconciliation package that would fold in student loan reform. And by reform, the Democrats mean increasing direct lending to students by the federal government.

Though the two issues may seem utterly unrelated, they do have this in common -- both health care and higher education are realms of American life in which government has undermined the operation of market forces and caused artificially high prices. These are two arenas in which the Democrats now propose to do exactly the wrong thing. Their reform reinforces old errors and will infinitely compound the problem of rising prices.

In health care, as Andrew Biggs outlines in National Review, the third-party-payer problem (created when government made health insurance deductible to employers) has insulated consumers from the true costs of their purchases. Whereas 47 percent of health care purchases were out-of-pocket in 1960, only 12 percent are today. In addition, programs like Medicare and Medicaid are on autopilot, automatically increasing expenditures in response to demand without further appropriations from Congress. When someone else is paying, whether the federal government or the employer, consumers are heedless of cost. Have you seen the TV ads for The Scooter Store? "My scooter didn't cost me a dime!" exults a customer. "Medicare and my insurance covered the whole thing." Multiply that by several million and you have a sense of the incentives.

But the world of supply and demand, competition and price is alien to the Democrats. Their explanation for rising health care costs is the greed of insurance companies.

They don't seem to ask themselves why health care costs have risen so much faster than other costs -- that is, faster than the overall rate of inflation. Are health insurance companies greedier than computer makers, restaurateurs, airlines, or other businessmen? Devotees of free markets don't deny the existence of greed, but simply want to make it work for the consumer through increased competition. And that brings us to student loans.

Just by coincidence, college costs have also been rising much faster than inflation for the past several decades. Or perhaps it's not coincidence. From 1982 to 2003, health care prices increased by 195 percent. Tuition at universities increased by 296 percent over the same period. Just as government has distorted the health care market with mandates, tax exemptions, and limitless subsidies, so it has distorted the higher-education market with ever-ratcheting grants and loans.

Economist Richard Vedder, in "Going Broke By Degree," outlined the trap into which politicians continually fall.

"... America has gotten itself into a vicious cycle with respect to higher education financing that goes like this: In year 1, tuition goes up fairly substantially. Political pressures build to 'do something' about the increases. Congress expands guaranteed student loan programs to make education more affordable, in turn increasing the demand for education and allowing universities in year 2 (or year 3, depending on the lag) to raise prices further. The result is a further expansion of student loan programs, state scholarship efforts, and other third-party funding."

Between 1994 and 2005, financial aid payments increased by 11 percent per year. This huge subsidy has permitted colleges and universities to increase their already exorbitant tuitions, but has not, Vedder argues, resulted in increased quality. Administrative staffs have ballooned, undergraduate instruction has been shortchanged, and salaries for faculty have doubled since 1980. To his own surprise, Vedder also found that increasing state support for institutions of higher learning not only does not result in greater economic growth, it is actually a net loss.

President Obama proposed in February to meet the challenge of rising education costs in the following way: to increase Education Department funding by 31 percent, to $77.8 billion, and to make Pell grants a new entitlement that will automatically expand to cover the number of new students who qualify.

The United States, like other developed nations, was on a glide path toward entitlement meltdown even before Barack Obama ascended. But his acceleration of the descent has been stupefying. If the health care/student loan behemoth passes, Democrats will have combined two of the greatest follies of recent decades.