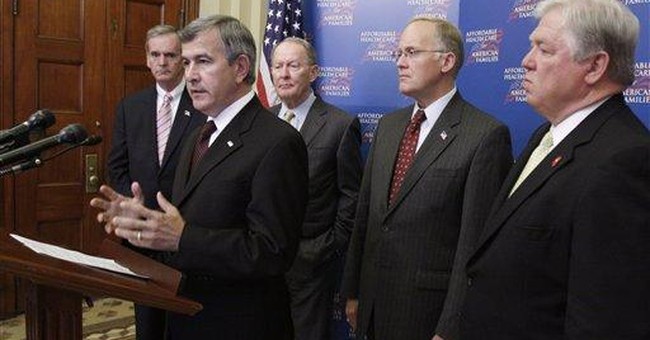 I labeled it "Health Care Overhaul IV" for convenience. In fact, a new 2,000-page behemoth seems to emerge more than once a week from the maw of Congress, so it's becoming impossible to keep track.

Until now, my reasons for opposing this fright mask were entirely dispassionate and flowed from 1) common sense (how are they going to provide more care for less money, and can we afford another huge entitlement when existing ones are going bankrupt?); 2) experience (government entitlements always cost far more than projections and government is far less efficient at providing services than the private sector); and 3) philosophy (the way to reduce prices is to increase competition -- not reduce it). But now the proposals being considered will hit my family particularly hard. This time, it's personal.

They also produce insulin pumps. My 16-year-old son, who has had Type I diabetes (an autoimmune disease distinct from Type II) since the age of 9, depends on a pump to live a reasonably normal life. If he didn't have an insulin pump -- a device the size of a cell phone that delivers insulin through a tube directly under his skin -- he would be required to give himself as many as four injections a day, as he did before he got the pump. And his life expectancy would be shorter.

In just the six years since David began using the pump, the technology has improved markedly. Whereas he used to have to insert the catheter (which must be changed every three days) with a 2-inch needle, he now uses a much less painful spring-operated inserter. The programming has become more sophisticated as well. The pump can now deliver carefully calibrated doses for high-carb foods like pizza and ice cream -- foods that are otherwise parlous for diabetics to enjoy -- and the pump is preset with carb counts for many common foods.

Insulin pumps provide better blood sugar control than other diabetes treatments. But they are far from perfect. Even careful users will frequently experience highs (which increase the likelihood of long-term complications like heart disease and blindness) and lows (which can be immediately life-threatening).

Yes, we families with Type I pray for a cure. But the recent progress in technology has offered really tantalizing possibilities. Medical device manufacturers have recently debuted a new technology that is key to the health of Type I diabetics -- continuous glucose monitors. These provide 24/7 data on the patient's blood sugar to supplement the six daily finger sticks. Eventually, the combination of these two technologies -- the insulin pump and the continuous glucose monitor -- could provide the Holy Grail for Type I diabetics: an artificial pancreas. The AP would keep blood glucose at normal or near normal levels and thus prevent worst effects of diabetes. We've heard estimates that the technology may become available within five years.

Unless the medical device industry is hit with a major tax.

While the U.S. leads the world in medical technology, most device makers are not huge conglomerates, but smaller companies already hurting in this recession. According to the Advanced Medical Technology Association, the industry consists of about 6,000 companies, most of which earn less than $100 million annually. The chief executive of B. Braun Medical, which makes pain control devices, told the Washington Post that paying his share of the new tax would "exceed my research and development budget." The $4 billion annual tax would represent about 40 percent of the industry's outlay for research and development ($9.6 billion).

If this tax is enacted, medical device manufacturers will cut back drastically on R and D, and may have to lay off employees. In addition, they will charge higher prices for their products to compensate for the money confiscated by Washington. Since health insurance plans frequently cover half or more of the cost of these already expensive products, health insurance rates would have to rise as well. This is just one more example of the ways health care costs would be driven up, not down, by the Democrats' reforms.

As for David, he will see the prospect of an artificial pancreas -- his greatest hope for a healthier and longer life -- recede over the horizon.