Remembering the Darker Side of Teddy Kennedy 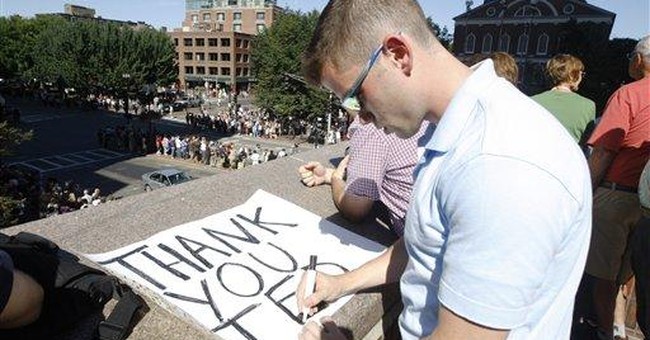 The death of Sen. Edward Kennedy, we are being told, should strengthen our resolve to act in a bipartisan fashion. Many of the tributes, from former presidents and Republican colleagues, have stressed the late senator's willingness to find "common ground." Well, since ancient Rome we've been exhorted not to speak ill of the dead. But neither should we completely disfigure the truth.

Before offering some less than hagiographic reflections on the late Sen. Edward Kennedy (may he rest in peace), one pleasant memory: About a decade ago, I was late for a party in northwest Washington D.C. -- a neighborhood not known for abundant parking spaces. After circling the block several times, I spied a cramped space and determined that somehow I was going to fit my minivan into it. Just then, a large man approached walking two Portuguese Water Dogs. He stopped, saw my predicament, and proceeded to guide me into the space with lots of laughter, encouragement, and a little bit of teasing. I knew (obviously) that my Good Samaritan was the senior senator from Massachusetts. I have no reason to think he recognized me.

So I have personal experience of Teddy Kennedy's charm and affability. The many stories of his personal kindnesses to others (including those with whom he disagreed politically) speak well of him -- to a point. But Kennedy was a politician who too often permitted his own sense of righteousness to overwhelm the large reservoir of decency that he is reported to have possessed. He could trample on conservatives with, it seems, hardly a pang of conscience. He may have been the "great liberal lion" of the U.S. Senate, but some of us cannot forget that his tactics were often low and dishonorable.

Former President George W. Bush was characteristically gracious about Kennedy ("a great man") in his comments since his death, but Kennedy went after Bush utterly without scruple. Consider Kennedy's shrill attacks on President Bush's decision to invade Iraq. In 2002, Sen. Kennedy himself had said, "There is no doubt that Saddam Hussein's regime is a serious danger, that he is a tyrant, and that his pursuit of lethal weapons of mass destruction cannot be tolerated. He must be disarmed." But just a year later, Kennedy was saying, "This was made up in Texas, announced in January to the Republican leadership that war was going to take place and was going to be good politically. This whole thing was a fraud." In 2004, Kennedy said, "Before the war, week after week after week we were told lie after lie after lie after lie . . . the president's war is revealed as mindless, needless, senseless, reckless."

Kennedy did not -- perhaps could not -- accept that the Bush administration had made a good faith decision to use military force (as his brother did in the Bay of Pigs and Vietnam). Instead, he contributed to conspiracy theories about Bush's true motives. Echoing the most inflamed leftist websites, Kennedy alleged that "the President and his senior aides began the march to war in Iraq in the earliest days of the administration, long before the terrorists struck this nation on 9/11."

Sen. Kennedy's rhetorical ruthlessness was perhaps most famously displayed within minutes of the nomination of Judge Robert Bork to the Supreme Court. The world now knows that Bob Bork is one of the most intelligent, witty, reasonable, and civilized men in America. But at the time, few knew anything about him. Kennedy rushed to the Senate floor to introduce a grotesque bogeyman: "Robert Bork's America is a land in which women would be forced into back-alley abortions, blacks would sit at segregated lunch counters, rogue police could break down citizens' doors in midnight raids, schoolchildren could not be taught about evolution, writers and artists could be censored at the whim of the Government, and the doors of the Federal courts would be shut on the fingers of millions of citizens for whom the judiciary is -- and is often the only -- protector of the individual rights that are the heart of our democracy."

Judge Bork recounted later that when he met privately with the senator, Kennedy mumbled, "Nothing personal." When you have calumniated a man before the entire world, you cannot claim that it isn't personal.

One hopes that the Kennedy family will find comfort in the days ahead. But I cannot join those who uphold Teddy Kennedy as a model public servant, far less as an exemplar of any sort of bipartisanship.