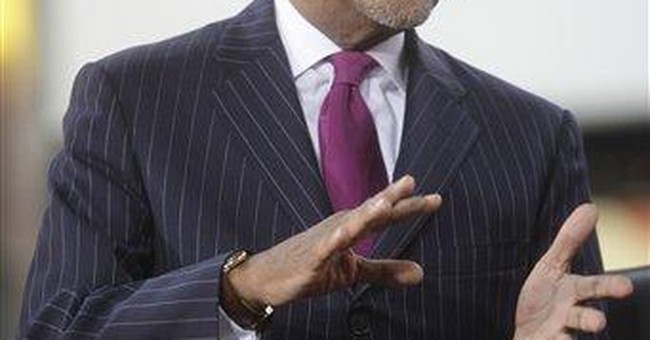 There were so many examples of presidential mendacity on view Wednesday night that I had planned to itemize a few in this column. But since even the New York Times is challenging a number of presidential whoppers -- for example, Obama's assertion that "If we had done nothing, if you had the same old budget as opposed to the changes we made, the deficit over the next 10 years would be $2.2 trillion greater" is pure deception. OK, the Times didn't use that word, but reporters Peter Baker and Robert Pear did say, "In fact, $1.5 trillion of those 'savings' are mainly based on an assumption that the United States would have had as many troops in Iraq in 10 years as it did when Mr. Obama took office. ... Before leaving office, President George W. Bush ... mandat(ed) the withdrawal of all American forces within three years. So Mr. Obama is claiming credit for not spending money that ... would never have been spent in the first place."

Congratulations to the New York Times. It's starting to seem that Professor Slughorn's antidote to the love potion has worked. If Obama is being that dishonest about the budget deficit numbers, how much can we trust his numbers on the costs of health care reform?

Though President Obama was at his smooth and polished best the other night, two aspects of his worldview came into sharper relief -- his reflexive hostility toward and misunderstanding of business, and his reliable resort to left-wing fables about race relations.

Most Americans, unlike Mr. Obama, do not believe that a capitalist system is inherently corrupting. Is that too strong? Look at the president's explication of what goes on in the mind of a physician confronted with a sick child: "Right now, doctors, a lot of times, are forced to make decisions based on the fee payment schedule that's out there. So if they're looking and -- and you come in and you've got a bad sore throat, or your child has a bad sore throat, or has repeated sore throats, the doctor may look at the reimbursement system and say to himself, 'You know what? I make a lot more money if I take this kid's tonsils out.'"

Oh, dear. For one thing, most internists and pediatricians don't even perform tonsillectomies. That's a procedure for which they would refer the child to an ear, nose, and throat specialist. But the larger point is that the man who is asking us to trust him to revamp a critical (and highly personal) aspect of American life is someone who sees doctors and insurance companies as villains, and seems to imagine that there exists some alternative government-dominated system in which apple-cheeked maidens will take your blood pressure and draw your blood for the sheer joy of it, not to earn a salary. And sandal-clad doctors will be freed from the stain of profit seeking to pursue their patients' best interests instead of their own.

It's been tried, Mr. President. Look north to Canada. Look east to Europe. Your new ideas debuted about 1945. Their cancer survival rates (the best metric of health care quality) are significantly below ours. Their facilities are less modern. Their contribution to new medical technology and drugs lags. Their wait times for surgeries and other treatments are significant.

And though his election represented, we are told, a great step toward a gilded post-racial future, President Obama at his press conference managed to take a giant step backward. Without having all of the facts or hearing from both sides, his liberal knee jerked in the direction of white racist cop. Worse, the whole Cambridge, Mass., police department was "stupid" to arrest Henry Louis Gates. Perhaps, but having read the police report, it sounds like Gates was itching for a fight. The point is that President Obama was so ready to take sides. Why? Well, he answered that: "... What I think we know separate and apart from this incident is that there is a long history in this country of African-Americans and Latinos being stopped by law enforcing disproportionately. That's just a fact."

Not quite. It's a contentious and emotional minefield. Yes, there has been harassment of blacks by white police departments. But that's hardly the whole story. Blacks and Hispanics also commit a disproportionately high percentage of crimes.

It seems the Obama presidency means we're mostly past white racism. As for reverse racism, it's still in fashion.