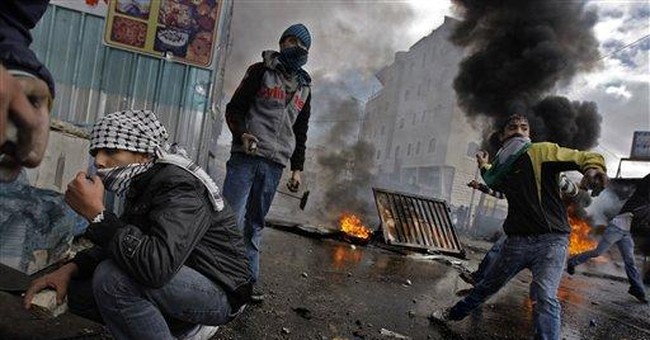 Just for a lark, I decided to google "international condemnations of Hamas" this morning. You can guess what came up, right? Naturally, searching for condemnations of Hamas, one finds only international condemnations of Israel. An Australian report noted that the "British Foreign Secretary David Miliband is calling for an urgent ceasefire, while Russia's Foreign Minister says he's told his Israeli counterpart to urgently halt the military action." The United Nations High Commissioner for Human Rights, Navi Pillay, "strongly condemned Israel's disproportionate use of force," as did Brazil. Indonesia called on all countries to "sever all forms of diplomatic and business ties with Israel." French President Nicolas Sarkozy, who currently holds the rotating chair of the European Union, did call upon Hamas to halt its rocket attacks but also censured Israel's "disproportionate response."

Let's fantasize. Let's pretend that the "international community" (it's not a community, thus the quotation marks) actually lived by the principles it claims to advance. It happens that international communiteer par excellence, Jimmy Carter, (he received the Nobel Peace Prize in 2002 "for his decades of untiring effort to find peaceful solutions to international conflicts") was in Syria on Dec. 14, meeting with Hamas leaders. Nobel laureate Carter was silent when Hamas announced its decision to allow an Egyptian brokered ceasefire with Israel to expire. Nor did he -- or any international leader -- comment upon the 4,000 rockets that Hamas has rained down on Israel just since 2005.

Hamas held an anniversary party of sorts during the time of Carter's visit. Marking the 21st anniversary of the organization's founding, Hamas staged a large demonstration in Gaza City that featured video connections to Damascus (where Carter was meeting with Khaled Meshaal). Ismail Haniyeh addressed the crowd of 300,000, promising more terror and violence toward Israel in the name of Allah. There was also a skit. A Palestinian dressed as Gilad Shalit, the Israeli soldier who was kidnapped and has been held by Hamas since 2006, was portrayed pleading for his life. "I miss my Mommy and Daddy," he sobbed into a microphone for the crowd's delectation. Search in vain for international condemnations.

The so-called international community has a script already prepared for any news from the Middle East. In this script, there is only Israeli violence, Israeli repression, Israeli guilt. The script reads as follows: Palestinian violence and terror against Israel is not to be condemned because it is the response to occupation and repression. On BBC radio, host Owen Bennett-Jones objected when Israel's ambassador to Great Britain pointed out that Hamas has been bombarding southern Israel with rockets on a daily basis. "But your analysis is seen by people around the world to be completely wrong-headed. The idea that Hamas sort of came from nowhere and radicalized Palestinian society overlooks the fact that Israel occupied and repressed these people for over 40 years."

In 2005, perhaps accepting Bennett-Jones's interpretation of history, Israel pulled out of Gaza completely, uprooting all of the Jewish settlers, and leaving the area completely to the Palestinians to administer. Rather than build a society of their own, Hamas, which controls Gaza -- the Palestinian Authority controls the West Bank -- has used its independence to launch a ceaseless barrage of missiles against Israel.

It's often pointed out that Hamas does not recognize Israel's right to exist. It's more than that. Hamas, with Iran's backing, is committed to Israel's violent destruction. Missiles have fallen on schools and homes. Hamas is explicit about desiring Israeli counterattacks, because while Hamas aims to kill Israeli civilians, they know that Israel tries very hard not to kill Palestinian civilians. But every Palestinian death at the hands of Israel is seen as a propaganda victory for Hamas -- which is why they place their munitions and terrorists in mosques, hospitals, and homes crowded with children. Hamas representative Fathi Hamad stated it explicitly: "For the Palestinian people death became an industry, at which women excel and so do all people on this land: the elderly excel, the Jihad fighters excel, and the children excel. Accordingly (Palestinians) created a human shield of women, children, the elderly and the Jihad fighters against the Zionist bombing machine, as if they were saying to the Zionist enemy: We desire death as you desire life."

It's impossible for Israel to hit back at Hamas without harming and killing innocent civilians. As Likud leader Benjamin Netanyahu has pointed out, by aiming at Israeli civilians and using Palestinian civilians as human shields, Hamas is committing a double war crime.

But you will wait in vain for an international outcry.