What Obama Could Destroy 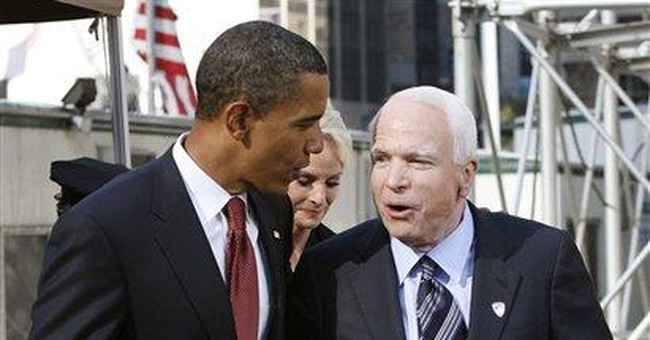 I was polled last night. Yes, it happens. I spent half an hour on the telephone with a representative of the Pew Research Center for the People & the Press. The results will be made public in a few days. One question stands out. They asked, "Do you know what Barack Obama's religion is?"

Don't you get the feeling that you can already write the post-election analysis if Obama loses? "A nation still unable to shake its legacy of racism and discrimination ... a nation so xenophobic about anyone with a foreign-sounding name could not be elected ... Obama could not correct the misimpression that he was a Muslim." It would almost be worth having Obama win to avoid the nauseating analysis that will certainly follow his loss.

But not quite. It is hard to think of any issue dear to the hearts of conservatives on which Barack Obama is not planted firmly on the other side -- the power of diplomacy vis-a-vis aggressors, the proper care and feeding of teachers unions, the threat of terrorism, affirmative action, the importance of free trade, immigration reform -- I could go on. If elected, President Obama, arm in arm with Nancy Pelosi and Harry Reid, would be in a position to do serious damage to the country on a number of fronts. His convention speech removed any doubt that he is an orthodox, big -- no, huge -- government liberal.

To focus on one important area: Barack Obama could rewrite our health care system. On any number of occasions during the primaries, Obama offered that if he were designing a health care system from scratch, he would choose a single-payer option. But since we've got this employment-based system, he has chosen to reform what we have instead -- or so he claims. Yet if his reforms are enacted, they will drive private insurance out of the market entirely.

Obama has embraced the "play or pay" concept first offered by Michael Dukakis. In order to solve the problem of the 47 million uninsured, Obama would require all but the smallest businesses to either offer health insurance that meets government guidelines, or pay a tax that would finance government-provided health insurance. The Obama plan doesn't offer many specifics but most analysts agree that the Commonwealth Fund's health proposal is nearly identical. It would impose a 7 percent tax. Since the tax would almost certainly be less onerous to employers than expensive health care plans, more and more businesses would opt for the tax, forcing private insurers to raise rates even more. Once the stampede got going it would be impossible to stop. The private insurance market would collapse.

What the U.S. would have then would be pretty much Medicare for everyone -- or single payer.

Around the world, single-payer systems keep costs down by rationing care. A Cato Institute study found that in Norway, health care is funded through general tax revenues (taxes consume 45 percent of GDP). But Norwegians commonly travel abroad to avoid long waits. "Approximately 280,000 Norwegians are estimated to be waiting for care on any given day (out of a population of just 4.6 million)." In Britain, "delays in receiving treatment are often so long that nearly 20 percent of colon cancer patients considered treatable when first diagnosed are incurable by the time treatment is finally offered." Even in France, whose system gets high marks from international raters, bureaucratic rigidity contributed to the deaths of 15,000 elderly people in the heat wave of 2003.

McCain's health care reforms put the focus where it belongs -- on increasing market competition and consumer choice. It was government that saddled us with this cumbersome employer-based system in the first place (by making contributions to health plans tax deductible for employers during World War II). Though arguably still the best in the world (where do sheiks and princes go when they're really sick?), our system does little to encourage economy (due to the third-party payer problem), discourages competition, leaves millions without coverage because plans are too expensive, discourages job switching, and suffers from needless complexity. McCain's plan would give a $2,500 tax exemption to individuals and $5,000 to families to purchase their own insurance. The remainder would go into a health savings account. McCain's reform would permit consumers to purchase plans across state lines, thus increasing competition.

Both plans represent "change." If Obama, Pelosi, and Reid succeed, they may change our health care system for the worse, and permanently.