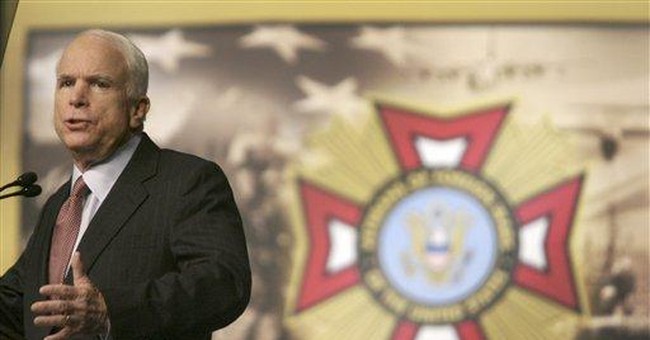 "Sickly. Weak. Feeble. Pick your choice." So began a Washington Post story about John McCain's presidential campaign almost exactly a year ago. "The one-time front-runner for the Republican presidential nomination has disappointing poll numbers and deathly results from the second quarter of fundraising. His failed effort to push through a comprehensive immigration bill has alienated him from many conservative Republican voters. ... Out of luck and money, he's a man looking for love."

Well, well. The newest polling has him in a virtual tie with Barack Obama (some ahead, some a little behind). He may not have found love, but he has certainly found luck.

Luck has been sitting on John McCain's shoulder for 12 months and seems to be warming to her task as November approaches. Consider:

1) If immigration had remained a sizzling issue throughout the Republican primaries, McCain would never have revived. But it didn't. The topic that dominated the summer of 2007 and had talk radio in a perpetual froth collapsed like a cheap tent. People continue to care about the issue, but the white-hot coals have cooled, and other matters have eclipsed it.

2) If Huckabee had not wounded Romney in Iowa, sending Romney limping into New Hampshire, McCain would probably have lost to Romney in the first two contests of 2008. It is hard to imagine that if Romney had won Iowa and New Hampshire (as his playbook called for) that he would not have won the remainder of the major races and taken the nomination.

3) Iraq was going to choke the air out of McCain's campaign. Though he was a persistent and public critic of the Bush Administration's handling of the war (he called Donald Rumsfeld "one of the worst secretaries of defense in U.S. history"), McCain was closely associated in the public mind with the war in general, which he firmly supported. If chaos and failure in Iraq had continued to dominate the headlines into 2008, McCain's votes would have been measurable with an eyedropper. But instead, and enormously to the credit of John McCain, President Bush changed his war strategy. McCain had long argued that the war was incompetently prosecuted and complained that more troops were required. When Bush at long last embraced the McCain critique and changed generals and strategies in Iraq, fortune again smiled upon McCain by delivering a rapid success. The gains in Iraq are still fragile, as Gen. David Petraeus has warned, but this, too, works to McCain's advantage. Voters will be asked to choose between a man who foresaw the correct strategy and can guide events toward a satisfactory conclusion, and a man who even today declines to acknowledge that opposing the surge (Obama had argued that it would make things worse!) was a mistake.

4) The price of gasoline rose to $4 per gallon, handing the Republican candidate a huge domestic issue with which to pummel his opponent. Voters have witnessed the Democrats refusing to permit votes on drilling in the Gulf of Mexico and on the outer continental shelf. "I'm trying to save the planet," Speaker Nancy Pelosi explained. They have noticed the Democrats endorsing wind, solar, alternative, geothermal and every other castle in the air that comes along. But vast majorities of Americans want to do everything possible to find new energy, very much including more domestic drilling for oil and gas, as well as building new nuclear power stations. The Democrats favor only the expensive and speculative cures. Advantage McCain.

5) Vladimir Putin delivered a timely reminder that the world is not Scarsdale. With Russian tanks rolling across international borders and an embattled, democratically elected president of a tiny country pleading for support from the West, Barack Obama looked and sounded tinny and inexperienced. McCain's no-nonsense determination made a nice contrast.

6) The American press's infatuation with Obama has begun to backfire. Forty-eight percent of the public said in a recent poll that they are "hearing too much" about the Democratic nominee and are tiring of it.

7) The economy refuses to dive into a real recession.

8) The long, long slog of the presidential campaign is paying dividends to McCain as people begin to wake from Obamamania and ask "Just what has this young man done to qualify him for the highest office?"

Luck and fortune are clearly on McCain's side. But they are nothing if not fickle. By all the usual political calculations, this should be a Democratic year. It will require the continuing favor of the Fates to keep it from being so.