Mike LaChance
|
Posted: Dec 19, 2018 9:51 AM
Share   Tweet
The opinions expressed by columnists are their own and do not necessarily represent the views of Townhall.com. 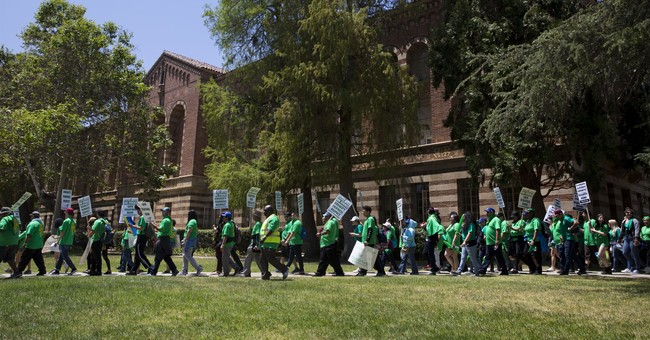 In case you haven’t heard, a new trend is sweeping through the administrations of American colleges and universities. In an effort to keep pace with progressive politics, which already dominate the academy, schools are hiring administrators who carry titles like “Vice President of Diversity and Inclusion.” These bureaucrats are paid exorbitant amounts of money to supposedly promote fairness and social justice on campus.

Academia is apparently exempt from the constant progressive call to get money out of politics, as a commitment to the left’s concept of diversity can be a one-way ticket to wealth in higher education.

Big money is involved, even for small schools. Tacoma Community College in Washington State is currently seeking a Vice President for Diversity, Equity, and Inclusion with a potential offer of $120,000 to $130,000 dollars.

During a recent appearance on FOX News, Manhattan Institute scholar, Heather Mac Donald, noted that the Vice Chancellor for Equity, Diversity and Inclusion at the University of California, Los Angeles makes over $400,000 dollars a year.

In other words, the top diversity administrator at UCLA makes more than the president of the United States. Nice work if you can get it, as they say.

What do these administrators do, exactly? American taxpayers, who help to fund public schools like UCLA, might be able to justify the expense if our universities were beacons of free speech but that’s obviously not the case. Over the last decade, free speech, one of the pillars of American life, has been under fire at schools across the country. Conservative, pro-American voices are routinely protested and even shut down by progressive campus activists.

It’s very easy to understand why a university president would want a “Vice President of Diversity” in their administration. If any type of identity-based controversy erupts on campus before the school has such an administrator in place, they can placate the campus mob by announcing plans to hire a VP of diversity and inclusion.

If the school already has someone in this role and a similar incident occurs, the school president can say that they have informed their VP of diversity and inclusion, and that they are confident appropriate steps will be taken.

In this sense, the diversity administrator serves as an insurance policy and escape clause for other college administrators who are terrified of the campus mob, which is somehow almost always far left.

Now is a perfect time to offer American college students a lesson in basic economics.

Everything in life must be paid for and buyers only typically agree if they believe the transaction will benefit them in some way. That’s why our super-progressive colleges want lots of money, whether it comes from students or the United States government, in other words, taxpayers.

In recent decades, colleges and universities have devolved into little more than political indoctrination centers. Why should the working people of America subsidize what they correctly perceive as political organizations actively working against their interests? The short answer is that they won’t, at least, not willingly.

Until college campuses once again demonstrate political balance, including a clear commitment to freedom of speech, neither the academy nor campus activists, have any business making demands on hard-working Americans.

College affordability is achievable, but not with administrators who are paid nearly half a million dollars a year for doing nothing more than advancing left-wing concepts like social justice.

In fact, the next time any students decide to protest the rapidly rising cost of tuition, they might want to do so in front of the nearest office of diversity, equity, and inclusion.

It would only be fair.