Inspiration to Us All 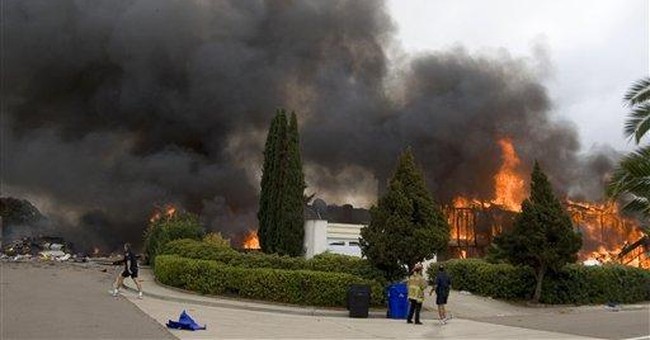 When governors are being arrested and the economy is in the tank, we tend to forget that this is a great nation made up of the greatest people in the world.

By now, we know the tragic story of the military jet that crashed into a residential neighborhood in San Diego, wiping out an entire family.

It’s practically impossible to fathom such a catastrophe.  An innocent mother and her daughters, along with the woman’s own mother, killed in a twist of fate, a random and likely unavoidable accident that seems as surreal as being crushed by a falling meteor.

Things like this test the faith of the staunchest of people.  I’m sure that lots of individuals turn bitter and angry after losing loved ones, rejecting the complicated and challenging belief that God always has a plan.

Dong Yun Yoon is apparently not one of those faith-challenged people.

When Mr. Yoon left for work the other day, he couldn’t possibly have envisioned losing his 36-year-old wife, Young Mi, his daughters Grace and Rachel, who were 15 months and 2 years old, respectively, and his 60-year-old mother-in-law, Suk Im Kim.  The idea of an F/A-18D Hornet falling from the sky and crushing one’s precious family would be impossible to expect.

And yet this gentle man, microphones and cameras thrust into his face, tearfully expressed the inner strength of a believer:  “…my wife and two babies and mother-in-law are in heaven with God,” he said.  “And I know God is taking care of them.”

But then, he said something that should serve as a powerful inspiration to us all.

The pilot of the jet, who was on a training mission off the carrier Abraham Lincoln, apparently experienced engine failure and ejected safely from the doomed aircraft before it plunged into the Yoon home.

I can’t begin to understand how this young husband and father could feel about the man who had been flying the jet that ultimately took his family from him.

But Don Yoon quickly dispelled any notion that he harbored any resentment for the pilot.

“Please pray for him not to suffer from this accident,” Yoon said of the young Marine.  “I know he’s one of our treasures for the country, and I don’t blame him.  I don’t have any hard feelings.  I know he did everything he could.”

What an amazing display of grace, compassion, and love.

And how incredible it is that this grieving, shell-shocked man would take this awful circumstance to express support for one of the brave members of the United States military.

How many of us could demonstrate such courage?

Already, members of Congress are demanding a public investigation.  I would imagine that the Code Pink activists, the type of people who use bullhorns to try and run military recruiters out of town, want the pilot to be brought up on murder charges.

I’m sure that the military haters are already formulating arguments to close down bases and installations within a hundred miles of cities and neighborhoods.  Before the smoke clears, there’ll be cries for people being court-martialed and fired.

But for Don Yoon, for some unknown reason God decided it was time to take his family.  This was a horrible accident and no one is to blame, he said.

Moreover, the pilot isn’t only blameless, but he’s one of the good guys who did everything he could to avoid the disaster.

In an era where people get paydays for dumping McDonald’s coffee on their laps, this is simply an extraordinary thing to say.

It turns out that Don Yoon is a naturalized American citizen, an immigrant from South Korea.  He represents the best and brightest our country has to offer.  This is a man that all of us can be proud to call a fellow American.

You, too, are a national treasure, Mr. Yoon.

Our hearts and prayers are with you during this difficult time.