Riding with Rudy Into the Pepsi Center 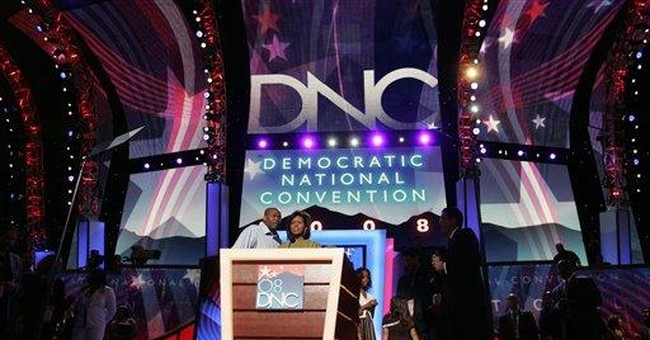 Doing a radio show from a political convention's "radio row" is always an amazing experience. My visit here this week to Denver for the DNC is the 11th political convention I've been privileged to attend. And there is always one defining moment that makes the weeklong affair one I'll always remember.

That moment came for me yesterday when I traveled with Rudy Giuliani into the Pepsi Center.

Mayor Giuliani is in town as part of the "loyal opposition" contingent. The RNC holds a number of off-site press conferences featuring prominent Republicans like Rudy and Mitt Romney who articulate, on a daily basis, the vast differences between the two parties.

As you might imagine, these folks wouldn't exactly be given the red carpet treatment in a city overrun by passionate Democrats.

In fact, when I landed at Stapleton International Airport Sunday afternoon, I was greeted by a pair of young college kids who were working for Fox News and assigned the task of handing out media credentials to the guests and pundits who would be appearing on the cable TV news giant.

They stood outside the security perimeter with huge "Fox News Channel" signs so those of us who needed to pick up our passes could easily spot them.

Of course, that meant they were also easily spotted by the Democrat delegates and supporters who were also flying into Stapleton.

In five short minutes, I heard more profanity, jeers and angry shouting directed at those two poor kids than is ever heard at a cage match between two professional wrestlers.

As they nervously handed me my badges, one crazy looking man with frizzy hair standing straight up spotted me and started screaming, "That's that Mike Gallagher jerk -- F*****g neo-con! Neo-con! Neo-con!"

It was impossible for me to keep from laughing.

I sort of felt like the humans who got spotted by the zombies in the movie "Invasion of the Body Snatchers."

So when I rode with Rudy yesterday, it was hard to imagine what kind of reception he would receive. In fact, we had to get out of the motorcade and walk the final mile into the security checkpoint because of traffic tie-ups.

Rudy was up to the challenge.

But he needn't worry. I couldn't believe my eyes and ears, but literally every single Democrat -- many of them with badges indicating their delegate status -- cheered for him, shook his hand, posed for pictures, and told him how much they loved him.

I was fairly stunned.

It made me think about what a powerful vice-presidential running mate he would make for John McCain.

Besides Rudy's extraordinary bi-partisian popularity, he would give Hillary supporters a big reason to vote for McCain. I don't agree with his pro-choice position, but McCain is staunchly pro-life and Rudy's position would bring a ton of Democrats to the dance.

I know it's not conventional wisdom these days -- but John McCain could do a whole lot worse than picking Rudy.