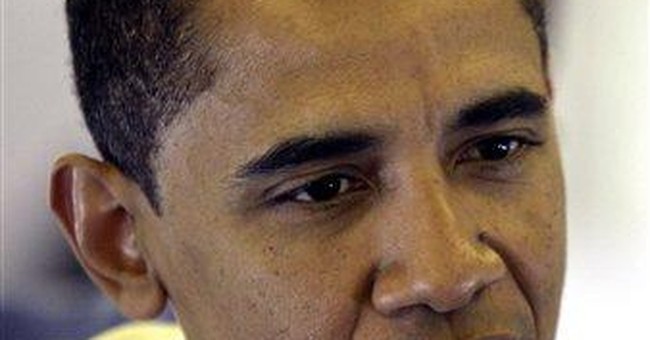 This week, a lot of people I admire and respect have scolded me for my frequent on-air use of Barack Hussein Obama’s full name.

These good folks all have solid reasons, I suppose, for disagreeing with the recitation of the man’s name. Karl Rove, for example, told me that to say his middle name “isn’t helping John McCain, it’s hurting him.” I was surprised at that suggestion since I’m not am employee of the Republican National Committee or someone on the McCain for President payroll, I’m a radio talk host who happens to be a Republican. But I remembered that Rove is a brilliant political kingmaker who often comes to successful conclusions by studying focus groups and polling data.

The great Michelle Malkin gently chided me for using Obama’s middle name. After my initial shock (after all, anyone who continually refers to “Obamasiah” isn’t someone who shies away from edginess) she went on to explain how the loony left has honed in on her maiden name as a way to try and attack her with some kind of racist smear about her ethnicity. So I think she feels the use of a name to make a point, legitimate or not, is unnecessary.

I cannot – and will not – take exception to anyone who disagrees with my use of Sen. Obama’s full legal name. But I will continue doing so because I think there are substantive reasons to consider his life in total. The man who wants to be commander-in-chief should expect to have his childhood, his family, his entire belief system scrutinized by the voters.

And a year-old New York Times article that I found gives anyone ample reason to wonder about his feelings about the Muslim world. At a time when we are at war with Muslim extremists who want us all dead, isn’t that fair?

This controversy reminds me of the righteous indignation offered up by Mitt Romney supporters when anyone wondered aloud about his religious beliefs as a Mormon. Despite the reality of plenty of Evangelicals wondering how they could pull the lever in a voting booth for a man whose religious practices and beliefs are so contrary to their own church doctrine, Gov. Romney’s people shrieked that those folks were “bigots” and guilty of religious intolerance.

At the risk of sounding harsh, who does anyone think they are to lecture voters about what reasons they are not allowed to consider in voting for a presidential candidate? Voters can have any doggone reason they wish in determining who they will – or won’t – vote for.

If a voter chooses to select someone based on religious reasons, that’s their business. How dare any pundit or talk host denigrate a voter for what he or she feels is a legitimate reason not to cast an important vote?

And those of us who continually refer to the leading Democrat nominee for president by his legal birth name have the right to invoke his Muslim middle name whenever we damn well want to. Because there is some solid, compelling evidence to suggest that his foreign policy beliefs could very well be influenced by his familiarity with the Muslim world.

When Nicholas D. Kristof wrote a column entitled, “Obama: Man of the World” that appeared a year ago this week in the New York Times, it was intended to be a fawning, complimentary profile of a candidate who continues to receive a lot of fawning and compliments from the mainstream press these days.

Kristof, a well-established lefty, argues that this “worldly” man brings a wealth of foreign policy experience to the White House by virtue of the fact that he “has actually lived abroad.” Kristof wrote, “(Obama) spent four years as a child in Indonesia and attended schools in the Indonesian language, which he still speaks. ‘I was a little Jakarta street kid’, (Obama) said. He once got into trouble for making faces during Koran study classes…but a president is less likely to stereotype Muslims as fanatics – and more likely to be AWARE OF THEIR NATIONALISM – if he once studied the Koran with them.”

Aware of their nationalism?

The puff piece goes on to say: “Mr. Obama recalled the opening lines of the Arabic call to prayer (there is no such thing, more on that in a moment) reciting them with a first-rate accent. Mr. Obama described the call to prayer as ‘one of the prettiest sounds on Earth at sunset.’ Moreover, Mr. Obama’s own grandfather in Kenya was a Muslim.”

You see what I mean, Karl? Michelle, this is from the New York Times, not some conservative publication. Kristof goes on to say, “Our biggest mistake since World War II has been a lack of sensitivity to other people’s nationalism…perhaps as a result of his background, Mr. Obama has been unusually sensitive to such issues and the need to project respect rather than arrogance.”

This, of course, is the same ridiculous tone that Obama himself tries to sound by suggesting that we should sit down and negotiate unconditionally with tyrants and terrorists, as if breaking bread with a lunatic who wants to break our neck would accomplish anything.

Even Nicholas D. Kristof must have been aware of how over the top his column was. As I said, there is no such thing as an “Arabic call to prayer” as he put it. That’s like saying a “Caucasian call to prayer.” One of my radio colleagues is an Arabic Christian named Lee Habeeb who took great umbrage at Kristof’s characterization. I suspect the writer or his editors recognized that bragging about a presidential candidate flawlessly reciting the Muslim call to prayer might be a bit much for the average reader, even of the New York Times, to absorb. After all, the English translation of a portion the Islamic call to prayer is, “Allah is the greatest, I bear witness that there is no God other Allah, there is no God other than Allah.”

The imagine of hearing presidential candidate and U.S. Senator Obama reciting those words sort of makes his refusal to put his hand over his heart during the National Anthem or wear an American flag lapel pin kind of pale in comparison, doesn’t it? With all due respect to some terrific conservative voices in America, I will continue to call him Barack Hussein Obama. We all should. What’s in a name? As Kristof’s column suggests: plenty.