Mike Fuljenz
|
Posted: Jul 06, 2017 12:01 AM
Share   Tweet
The opinions expressed by columnists are their own and do not necessarily represent the views of Townhall.com. 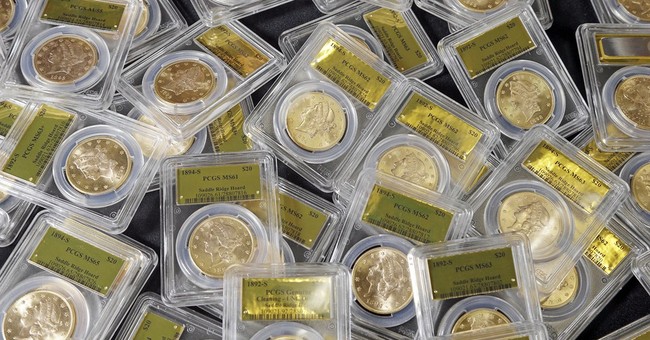 Investment advisors often speak of “negative correlation.” In practical terms, that means that a well-protected portfolio must contain investments that “zig” while the global stock markets “zag.” You don’t want all of your investments going down at once, right? Most investors suffered that fate in 2008 and 2009, when all three leading asset classes (stocks, bonds and cash for income) fell at once. That’s why investors need gold to lift a portion of their net worth higher, even while all of their other investments may sink in unison.

In the 1970s, gold quadrupled twice: (1) First, gold rose from $42 to $200 in 1972-74 based on Watergate and President Nixon’s resignation, the Arab Oil Embargo and resulting inflation and a 50% stock market decline. (2) Then gold quadrupled again in the late 1970s based on Carter’s failed foreign policies, an energy crisis, gas lines, double-digit interest rates, 11% unemployment and inflation.

Gold has historically risen sharply when global tensions rise. Some examples include Russia’s late December 1979 invasion of Afghanistan, sending gold up from $450 to $850 in just three weeks. Another dramatic example came after 9/11 in 2001. However, gold’s most dramatic gain came in 2008, when the big financial crisis triggered a global recession. Gold rose $100 in one day (and $160 in two weeks) when Lehman Brothers failed in the middle of September 2008. Gold rose from just $740 on September 11, 2008 to $902 just 12 days later. While other investments were falling, gold shot up. In 2017 gold is up 9%, which is better than the Dow, S&P and CRB Commodity Indexes.

Numismatic coins are the most concentrated forms of wealth – so that more value can be saved in a smaller space or easily transported. Over time, quality numismatic coins generally grow faster than gold bullion in price, according to a basket of 3000 rare coins (the PCGS® 3000 Index) that far outperformed gold bullion from 1970-2017.

Gold closed the first half of 2017 with an 8% gain – about the same as the major stock market indexes. Stocks and gold both fell during the last week of June.  However, both stocks and gold were superstar investments compared with the U.S. dollar (down 5.6%), the CRB Commodity Index (down 9.2%), Crude Oil (down 14.3%) and natural gas (down 18.5%).  In short, gold remained the star of the commodity universe in the first half of 2017.  The declining dollar helped the price of gold in U.S. dollar terms, but it’s also important to remember that gold has now declined in euro terms – making it more affordable.

“Gold Could Get Boost from Falling Dollar, Political Worries”

On Monday morning, July 3, gold corrected to $1,220 based on a stronger dollar, but one day does not comprise a trend.  The trend so far in 2017 is that the dollar is down over 5% and the euro is up over 8%, helping boost the price of gold in dollar terms while making gold more affordable in euro terms.

This is the essence of the “Commodities Corner” column in this week’s Barron’s newspaper.  It is titled “Gold Could Get a Boost from Falling Dollar, Political Worries.”  In that two-part headline, the weak dollar comes first, as it is the more important trend. It’s no coincidence that the price of gold rose over 2,000% in the 1970s, when the U.S. dollar was weak. Gold fell when the dollar gained strength, but it rose seven-fold from 2001 to 2011 when the dollar was weak.  Then gold fell from 2012 to 2016 when the dollar gained strength.  So far this year, the Wall Street Journal’s U.S. Dollar Index is down 5.6%.

The consensus opinion among Fed-watchers is that a weak U.S. economy and lower long-term bond rates may force the Federal Reserve to stop raising rates for now, while the European Central Bank (ECB) may stop its quantitative easing programs and start raising rates on the euro.  This would attract even more international assets into the euro and away from the dollar, causing the dollar to fall (and gold to rise).

The second half of the Barron’s article involves increasing political worries.  The Trump healthcare plan seems doomed for now, and tax reform deadlines keep getting pushed off.  Ira Epstein, a strategist at the Linn Group, says “If investors get wind that Mr. Trump can’t get his programs through Congress, money will instantly shift from stocks into gold.”  Besides gridlock at home, Barron’s cites “tensions between the U.S. and North Korea and trouble in the Middle East’s many hot spots” as engines for gold’s growth.