Mike Davis
|
Posted: Jun 24, 2020 2:00 PM
Share   Tweet
The opinions expressed by columnists are their own and do not necessarily represent the views of Townhall.com. 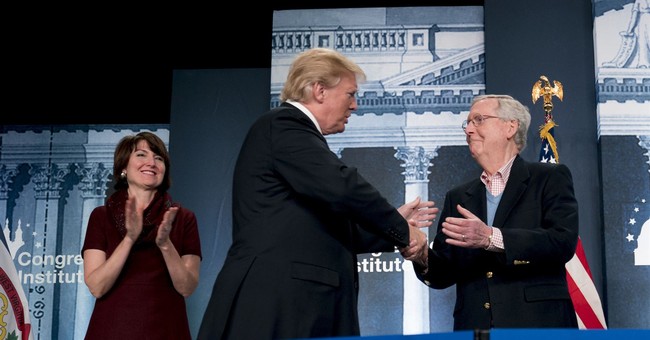 Senate Republicans voted on Wednesday to confirm Judge Cory Wilson, a Yale-educated Mississippi appellate judge with extensive state and federal government experience, to the United States Court of Appeals for the Fifth Circuit.

Judge Wilson is President Trump’s 200th Article III judicial appointment and 53rd federal circuit judge, filling 25% of the federal judiciary and previously shattering the all-time-record pace for appointments to the critically important federal courts of appeals — the last stop for more than 99% of all federal appeals.

At 200 (and counting), President Trump is #2 of 45 for the pace of all Article III judges. And the only reason President Trump also did not shatter this record is because Congress created 152 new judgeships (25%) for President Carter to fill.

Despite the Senate Democrats’ and their leftwing allies’ rhetoric, President Trump’s judges are some of the most qualified in our nation’s history. Don’t simply take my word for it: Leftwing commentator Ian Millhiser wrote an extensive piece on this, summarized here.

President Trump’s lifetime-appointed judges understand their crucial job is to ensure we have law-and-order, including protecting Americans from government overreach and mob rule. This is no longer an egghead abstraction, with many Democrat politicians more interested in power grabs than public safety with their #StayHome orders, coupled with their bowing to violent mobs of leftwing Antifa and Marxist-led Black Lives Matter (#BLM) terrorists.

1.       Reclaimed a Republican-appointed majority on the Supreme Court of the United States;

4.       Significantly narrowed the Democrat domination on the once-out-of-whack 9th Circuit, from +11 to +3 on this unruly 29-active-judge court.

This last point is of particular note. When President Trump took office, the Democrat-appointed judges had an 11-seat advantage on the 29-seat 9th Circuit. The President has narrowed that to just 3. And when President Trump wins re-election, he could "flip" the 9th Circuit — once thought impossible before the Trump presidency.

And President Trump could also fill 4 (or more) Supreme Court retirements in his second term.

And like they did for President Carter, Democrats will almost certainly create dozens of new lower-court seats for a President Biden to fill, undoing President Trump’s record-shattering transformation of the federal judiciary.

Leftwing radicals, like #DefundThePolice Brian Fallon from Demand Justice — a radical leftwing advocacy group of former Obama appointees who are still bitter over Hillary Clinton’s embarrassing and shocking defeat in 2016 — will demand the appointments of their liberal-judicial activists on Supreme Court and lower courts.

And the rioting, looting, and other violence we have seen in our major cities over the last several weeks — after Democrat politicians have locked up Americans for months with arbitrary and discriminatory #StayHome orders — has proven why we need law-and-order judges who will uphold the rule of law . . . and not bow to the rule of the mob.

Indeed, America as we know it is on the line this November — and the federal judiciary is our last line of defense from politicians who cannot or will not protect us from government overreach and the woke mobs.

In 2016, President Trump campaigned on the promise to transform the federal judiciary with conservative jurists. And he didn’t just talk; Trump actually delivered. Promises made; promises kept.