Mike Adams
|
Posted: Mar 21, 2017 12:01 AM
Share   Tweet
The opinions expressed by columnists are their own and do not necessarily represent the views of Townhall.com. 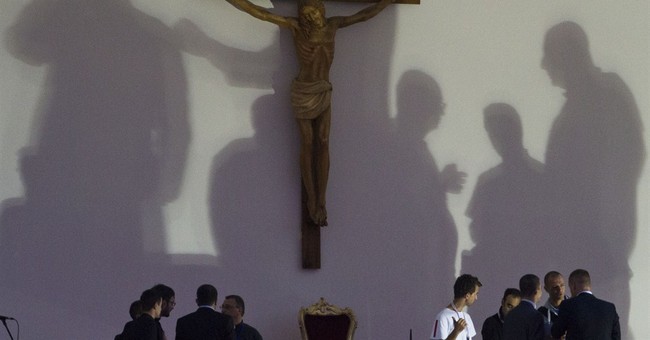 Author’s Note: This is a continuation of my last column “Swing Low, Sweet Chariot.”

Given his decades-long identification as an atheist, the fact that my father’s final words on earth were those of “Swing Low, Sweet Chariot” was truly remarkable. It seems that he was telling us in his own way that he had heard the Gospel's message, believed it to be true, and was sure of where he was going after he died. But my mother provided some additional context when we sat down to talk the next day, which was the Friday leading into dad’s final weekend here on earth.

I did not know it at the time but my father had gotten irritated with me in 2013 when I published my last book. In that book, I mentioned that an atheist father and a fundamentalist mother had raised me. Apparently, Dad objected to the reference strongly enough to approach my mother and say, “Mike called me an atheist. I’m not an atheist. I’m an agnostic!” In retrospect, it appears that a crack had emerged in the armor of the man who in 1975 refused my mother’s request to attend my baptism with the emphatic declaration, “There is no God!”

Apparently, the crack in the armor had also grown with time. In fact, just days before I arrived in Houston to have my last conversation with dad, mom had seen evidence of his change of heart.  It was revealed in what would be her last conversation with him. In that conversation, she was telling my dad that she wanted the poem, “When I Must Leave You,” to be read at her funeral. Then she read the poem to him, which ends with this line:

And never, never be afraid to die.

For I am waiting for you in the sky.

Upon hearing it, my father turned to my mother and said, “I know that I’m dying, Marilyn.”  He paused and then he added, “I’ll wait for you.” Those were the last words he ever spoke to his wife of 62 years.

By Saturday, my father was blind, mute, and barely clinging to life. I knew it was time to make the call to turn off his pacemaker so it would not shock his heart back to life after his brain had shut down entirely. I always thought that such a call would be difficult. But it was not difficult. It was time for him to leave us.

Dad managed to hang on for the rest of the day and night allowing me to get a good night’s rest. When I woke up on Sunday morning, my determination not to go back in dad’s room was altered by a phone call I received at eight o’clock. The call was from Lisa Chambers, who is the dearest friend our family has ever known. Weeks before dad got sick she woke up in the middle of the night with a vision that my father was running out of time and needed to give his life to the Lord. In July, Lisa knew dad was dying even before his symptoms set in and long before his doctors gave the formal diagnosis.

The call to me on Sunday morning in November was similar. The Holy Spirit had awakened Lisa five times over the course of the night. Each time she woke up, she had a specific verse on her mind and heart. She was calling to urge me to go back into my father’s room to share the verses with him. She knew my dad could no longer see or speak. But she insisted that my dad could still hear and that I needed to make sure he understood that salvation was his to receive. She urged me to go back in and share the verses with my father. I agreed to do so.

After Lisa emailed me the text of the verses, I went back into my father’s room. He was barely breathing when I walked in and said, “Good morning, Dad. It’s your son. I’ve come to see you one last time and to share some things with you.” Suddenly, my father’s breathing became strong and regular as I read these verses stopping between each to comment on their meaning and significance for him personally:

Let not your heart be troubled. You believe in God, believe also in ME, says Jesus Christ. I go to prepare a place for you and will come again and receive you to Myself, so that where I AM, there you may be also.

The Word is near you, even in your mouth: If you confess with your mouth Jesus Christ, and believe in your heart that God has raised Him from the dead, YOU WILL BE SAVED.

Jesus says to you: I AM The Way, The Truth, and The Life. No one comes to the Father except through Me.

Come to Me, All you who are weary and heavy laden, and I will give you rest and you will find rest for your soul. Whoever calls on the Name of the Lord SHALL be saved.

Now may the God of Peace Himself cleanse you completely, and may your whole spirit, soul, and body be presented blameless to the Lord Jesus Christ. Amen.

It seemed fitting to conclude by telling dad that he would soon see a Light, which was more than just some higher power. I told him that the light was the Good Shepherd who is good because he comes looking for lost sheep even when they are not seeking him. When I was finished, I just stood up, kissed my father on the forehead, and headed out of the door to catch my flight back home.

My father died at 4 o’clock the next morning. Shortly thereafter, his body was taken away and burned. But his soul survived the flames.