Mike Adams
|
Posted: May 26, 2016 12:01 AM
Share   Tweet
The opinions expressed by columnists are their own and do not necessarily represent the views of Townhall.com. 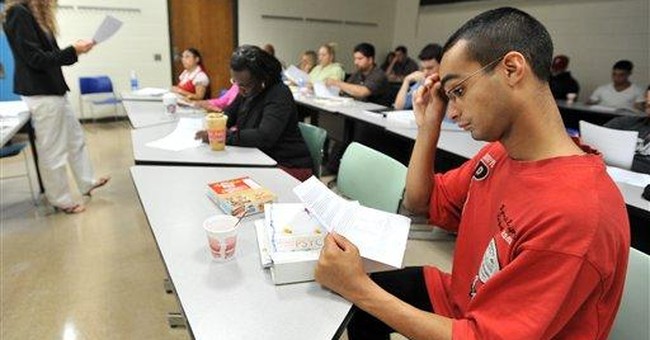 Even disciplines like sociology used to be populated with professors who were classically liberal. They showed a tolerance for diverse viewpoints and understood basic principles of free expression. Unfortunately, young “educators” who behave more like the military dictators of antiquity have now replaced them. The aptly named Bryce Hannibal of Texas A&M University provides a good example.

Like many others, Hannibal’s syllabus for Social Theory places a high premium on “Classroom civility, respect and tolerance.” Almost immediately, it sets the tone for censorship by stating that students are expected to behave both “respectfully and critically.” Seasoned educators know that the more we demand that students engage in so-called respectful speech the less likely they are to engage in critical speech – simply for fear of injuring someone’s feelings.

Indeed, the casual reader of Hannibal’s syllabus might experience confusion about which one trumps the other – a) the right of the speaker to be critical or b) the right of the listener to be respected. Hannibal settles the matter by reminding students that his classroom is “designed to be a safe place for learning and developing a critical perspective (emphasis mine) on social issues.”

For those who are not aware, the term “safe place” means censorship zone. And the term “critical perspective,” when used in sociology, actually means “Marxist.” If you think I am kidding just pick up any sociology textbook. Marxist theory is routinely referred to as “critical theory” in sociology classes and “critical criminology” in criminal justice courses, which are often taught by sociologists.

Armed with that knowledge, we can now understand that there is no real tension between protecting critical speech and banning disrespectful speech in the mind of “educators” like Hannibal. It means that everyone gets to enjoy a “safe” discussion where Marxist ideas are guaranteed respect. In other words, the critical perspective cannot be criticized. If anyone questions Marxism, he is removed from the safe place. If you think I’m exaggerating, just keep reading.

Hannibal asserts without evidence that the topics covered in his course are extremely personal to many students. He then commands that, “No expressions of intolerance, hatred, insensitivity, immaturity or otherwise derisive behaviors will be tolerated.” Did you hear that? He actually stated that intolerance would not be tolerated. That’s too rich for any Marxist to tolerate.

Hannibal goes on to say that, “this may include but is not limited to hate speech or ridicule against persons of color, any member of the queer community, men, women, or transgendered persons. Likewise, those who engage in the learning process will not be ridiculed for lack of understanding of an issue when seeking to examine an issue they do not understand. Please know that no question is a stupid question. I reserve the right to remove anyone from the classroom who engages in expressions of disrespect toward others or causes a disturbance in the learning process.”

Well, since no question is a stupid question I have some questions for Bryce Hannibal:

1. Do you suffer from such a severe intellectual hernia that you fail to recognize that your statement “expressions of intolerance … will not be tolerated” is self-defeating?

2. Isn’t saying that tolerance will not be tolerated sort of like saying, “I don’t speak a word of English” in English?

3. Isn’t saying that “immaturity” will not be tolerated incompatible with providing a “safe place” that encourages censorship? In other words, doesn’t protecting people from unpleasant ideas stunt their intellectual growth and maturity?

4. Why do you ban ridiculing people for their lack of understanding of an issue they do not understand? Is it because you fail to understand the First Amendment and don’t want to be called out on your professional incompetence?

5. Given that the First Amendment clearly protects “disrespectful” speech is it not truly disrespectful to threaten removal of students who express their First Amendment rights? And doesn’t that threat create a serious chill on freedom of expression?

Bryce Hannibal concludes his syllabus by stating that enrollment in his course is the equivalent of signing a contract with him and with one’s fellow classmates. Among the conditions of the contract is a requirement that all students “respect the process of learning by acknowledging the right of others to express their opinions and experiences with the courtesy I would want bestowed on me.”

In other words, Bryce Hannibal forces students to sign a contract he routinely violates. Students are required to respect the free speech rights of others. But Hannibal is allowed to hurl people out of class for exercising their basic constitutional freedoms.

It is unsettling to see classical liberals being replaced by unprincipled leftist dictators posing as educators. But the Mizzou debacle did teach us that there might be hope at the end of the rainbow. Eventually, they will start eating their own.