Mike Adams
|
Posted: Apr 12, 2016 12:01 AM
Share   Tweet
The opinions expressed by columnists are their own and do not necessarily represent the views of Townhall.com. 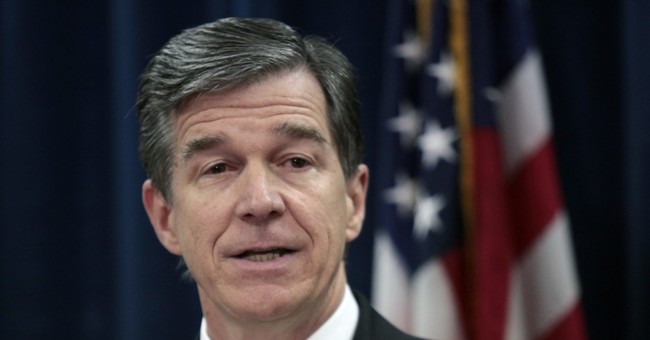 There is a Cooper’s hawk living in a tree in my back yard near the Intracoastal Waterway in Wilmington, North Carolina. He is extremely aggressive when defending his territory. In fact, just a few months ago he was annoyed by the presence of some Blue Jays nesting in a tree within his territory. So he grabbed one by the wing, flew him down to the ground, pinned him on his back, and slowly ripped his heart out of his chest right in front of the other Blue Jays – all just to send a message to them. That Cooper’s hawk is aptly named. Tactically speaking, he reminds me a lot of the North Carolina Attorney General.

Roy Cooper’s job as AG is to serve and defend the people of North Carolina. But he has long since abdicated his professional responsibility in order to pursue a larger social vision. That vision is to take over the State of North Carolina and transform it into California – even if it means turning cities like Charlotte into San Francisco.

So it really is no surprise that that Roy Cooper has decided not to defend HB2, which seeks to protect women from having to share public and “public accommodation” (read: private business) restrooms with men posing as women. Cooper would never dream of opposing the ACLU lawyers bringing the lawsuit. That is because he shares their worldview as well as their vision for the Tar Heel state.

1. Cooper should have addressed the patently unconstitutional actions of the Charlotte City council, which attempted to unlawfully exert authority over private businesses in Charlotte.

2. Cooper should have addressed the absolute necessity of the North Carolina legislature’s actions, which helped restore order and confidence in our system of checks and balances. In the process, he could have explained that HB2 was not designed to hurt anyone - and indeed that it poses no possible threat of ever hurting anyone. (He could have added that it would probably save the hearing of those who might otherwise go deaf from exposure to the plaintiff wailing of Bruce Springsteen posing as a legitimate musician).

Instead of doing those two things he took a very different approach in his press conference. First, he announced that he would not defend the actions of the state legislature claiming they were “unconstitutional.” Next, he went even further and characterized HB2 as a national embarrassment.

In short, Cooper could have explained the bill and stopped the full frontal assault that is now being directed at his state. In fact, he could have ridiculed PalPay for boycotting us given the fact that the company does business with five nations currently imposing the death penalty for homosexuality. In contrast, North Carolina does not execute homosexuals unless they actually kill someone.

So PayPal could safely move its headquarters from Singapore to Charlotte any day now. And Roy Cooper could honestly guarantee that they would be safer than a busload of lesbians on their way to an Indigo Girls concert. Instead, he poured gasoline on the firestorm of controversy. And he did it for the simple reason that he seeks the present conflagration for his own political gain.

Of course, this is not the first time Cooper has used his office to wage ideological warfare. I know that all too well as I battled Cooper for seven long years in federal court. I never met him personally but I had to deal with a flock of Cooper’s hawks sent to wage cultural war on his behalf.

All the way from the 4th Circuit Court of Appeals to the settlement negotiation table to the jury trial I had to endure an ideological onslaught from politically motivated and politically appointed attorneys working in Roy Cooper’s office. Their behavior was often characterized by brazen unprofessionalism. Fortunately, a bald American eagle named David French saved me from the Cooper’s hawks. But the North Carolina taxpayers were not so lucky. They had to foot the bill when Cooper lost.

Roy Cooper says he is embarrassed by HB2. But he should be embarrassed about losing a seven-year federal lawsuit against a public educator he should have been defending. The attorney general spent millions trying to protect North Carolina from conservative professors in public classrooms. Now he won’t spend a dime to protect North Carolina from convicted pedophiles in public restrooms. I think that really says it all.

In a few short months, we will be faced with a decision as to whether Roy Cooper will be the next governor of the state of North Carolina. The question we are facing is whether we wish to retain our identity as North Carolinians or be transformed into Californians.

I know where I stand. No state identity disorder here.