The Armpit of Academia 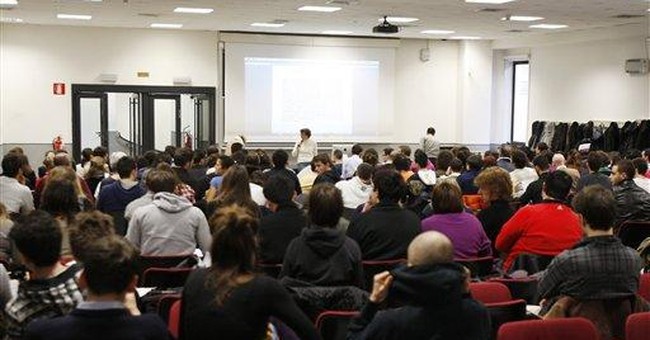 "'Life' in this 'society' being, at best, an utter bore and no aspect of 'society' being at all relevant to women, there remains to civic-minded, responsible, thrill-seeking females only to overthrow the government, eliminate the money system, institute complete automation and eliminate the male sex." - Valerie Solanas.

Professor Breanne Fahs is a revolutionary. She teaches Women's and Gender Studies at Arizona State University. Recently, she decided to give extra credit to her female students for "defying social norms" by refusing to shave their armpits. In the name of equality, she also gave her male students an opportunity to earn extra credit by shaving their entire bodies from the neck down. It's another feminist intellectual breakthrough. Higher education will never be the same.

ASU student Jaqueline Gonzalez participated in the extra credit exercise and said the experience allowed her to start on a path of activism. Gonzalez was quoted (by Lauren Clark over at CampusReform.org) as saying “The experience helped me better understand how pervasive gendered socialization is in our culture. Furthermore, by doing this kind of activist project I was no longer an armchair activist theorizing in the classroom.”

Gonzalez also added that “So much is learned by actually taking part in the theory or idea we learn in the classroom, and we could benefit from this type of pedagogy being taken up by similar classes.” You could almost say that the line between armchair theory and armpit activism is razor thin.

Ms. Gonzales has a bright future ahead of her, indeed. If she studies hard, she can become just like her teacher, Breanne Fahs. According to her own website, Professor Fahs specializes in "studying women's sexuality, critical embodiment studies, radical feminism, and political activism." She holds a B.A. in women's studies/gender studies and psychology from Occidental College and a Ph.D. in women's studies and clinical psychology from the University of Michigan.

Fahs has published widely in feminist journals and has authored several books including Performing Sex and The Moral Panics of Sexuality. But her most interesting work to date is about Valerie Solanas a controversial advocate of gender-based violence and the would-be assassin of Andy Warhol.

Valerie Solanas was a real feminist trailblazer. She believed that men were quite literally the root of all evil throughout the course of human history and therefore needed to be exterminated from the face of the planet via mass murder. It doesn't take a Ph.D. in clinical psychology from Michigan to realize that Solanas was utterly insane and hopelessly committed to gender-based violence. Indeed, she practiced what she preached, which is why she shot Andy Warhol.

Any true feminist would simply distance herself from Solanas and her legacy of gender-based violence. She is no more worthy of study than a homeless psychotic eating out of a garbage dumpster. But Breanne Fahs has written a sympathetic biography of Solanas.

Of course, Fahs can't help but see some good in Solanas, the violent genocidal feminist who advocated mass murder in the name of gender equality. After all, Fahs is the director of the Feminist Research on Gender and Sexuality Group at ASU. Her website describes it as "a group that engages students and faculty to fuse activism and rabble-rousing scholarship." Roughly translated, that means it is her job to make the insane appear to be sane and to repeat utterly ridiculous ideas until they appear to have an air of legitimacy.

Of course, no radical feminist is worth her salt unless she helps to reduce the stigma associated with violence in the name of women's liberation. After all, this is a movement that rests on a foundation made of the corpses 55 million innocent children.

Let's just hope they don't decide to overthrow the government, institute complete automation, and eliminate the male sex. It would be much easier if feminists would shave their armpits, put on some make-up, and eliminate gender studies.