A Queer Need for Rejection 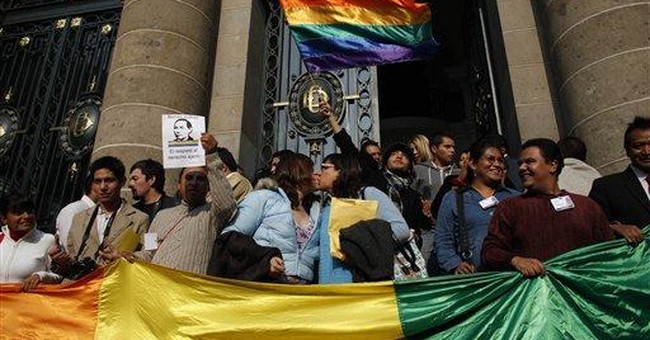 Whenever I write about the issue of First Amendment Freedom of Association, I defend the right of campus groups, not government administrators, to control their own belief structure and membership requirements. This often involves discussing real life cases with real life tension between religious groups and homosexual activists. This results in a slew of emails asking why a homosexual student would ever want to join a fundamentalist religious group. The short answer to the question is that homosexual activists don't really want to join these organizations. Some want to use them for political gain before shutting them down altogether.

Paradoxically, homosexual activists also target conservative Christians because being rejected by them is an important part of the process of attaining affirmation from the general public. When a homosexual activist tries to "join" such a group, it is often done with the following goals in mind:

1. Using discrimination claims to strengthen the genetic argument (and using the genetic argument to strengthen discrimination claims). It is fairly obvious why homosexuals want to assert that homosexuality is genetic. If they are programmed to behave in a certain way then homosexuality becomes less of a behavior and more of a status. This helps advance efforts to include sexual orientation in anti-discrimination laws, which are meant to give homosexuals equal power in relation to legitimate civil rights causes based upon immutable physical characteristics.

The only problem with the genetic argument is that it lacks supporting evidence. There is no more evidence for a gay gene than there is for Santa Claus or for legitimate feminist scholarship. The best the activist can do is to argue circumstantially that no one would choose a lifestyle that guarantees being subjected to discrimination. The argument is as silly as saying there must be an interracial dating gene because no one would choose to be subjected to discrimination for dating someone of another race.

But homosexual politics is not about logic. It is about end results. Activists need to be subjected to "discrimination" in order to advance their cause. So they join conservative Christian groups they do not like, engage in advocacy they know offends and disrupts the group, get kicked out of the group, and then claim to have been discriminated against. Finally, they lobby for stronger anti-discrimination rules that put them on a par with blacks and women.

2. Defaming the opposition. Homosexuals have a lot of options on campus. They can join a Unitarian Universalist group, they can join a United Methodist group, or they can start their own religious group that affirms homosexual conduct. But the very thought that someone on their campus disagrees with their lifestyle makes them angry. They simply cannot "coexist" (no matter what their bumper stickers say). This anger is probably due to awareness that they are engaging in a lifestyle that is both unnatural and immoral. So, if you can't beat the Christians, just join them (and eventually destroy them). It’s always destroying, not joining, that motivates them.

After they join the group they don't want to be in - and deny the stated principles of the group they never agreed with - the unable-to-coexist homosexual activist goes to the administration with a complaint. When the Christian group is expelled from campus under the anti-discrimination clause people ask "Why did the Christian group have to expel the homosexual?" Stated another way, the question becomes "Why can't Christians coexist with homosexuals?"

In the end, the homosexual activist has made the group whose very existence he refuses to tolerate look intolerant. Another public relations victory!

3. Containing moral criticism. Of course, once the conservative Christian group is gone a clear message is sent to those who would dare to criticize the homosexual lifestyle. This exerts a powerful chilling effect on constitutionally protected religious expression.

But that isn't the end of things. The homosexual rights movement continues to redefine homophobia in order to reduce any semblance of criticism directed toward the homosexual agenda. Isn't this similar to what we have seen in the struggle for racial equality in America?

At first, the civil rights movement was about stopping lynching and racial segregation. After redefining racism (to include any disagreement with black leaders whatsoever) the movement has become little more than a mechanism used to suppress political speech. Racism went from being a social problem to being a political weapon. Redefining homophobia now serves the same function for the homosexual activist that redefining racism served for the civil rights activist.

But there is one crucial difference between the black civil rights movement and the homosexual rights movement. The former began by addressing real oppression before eventually (and incessantly) crying “wolf” as a means of punishing political speech. The latter began as an attack on free speech that becomes more pronounced with each and every concession.

The supreme irony of all this is that the NAACP is the organization that first won legal recognition of the right to freedom of association in 1958. They prevailed in a successful effort to keep the KKK from joining and destroying their organization. The U.S. Supreme Court sided with the NAACP saying they could keep their membership lists secret and even keep out those who disagree with their beliefs.

Today, in an effort to attain moral equivalency with the NAACP, the homosexual rights movement is adopting one of the old tactics of the KKK. Politics makes strange bedfellows – particularly when it demands affirmation of what goes on in the bedroom.