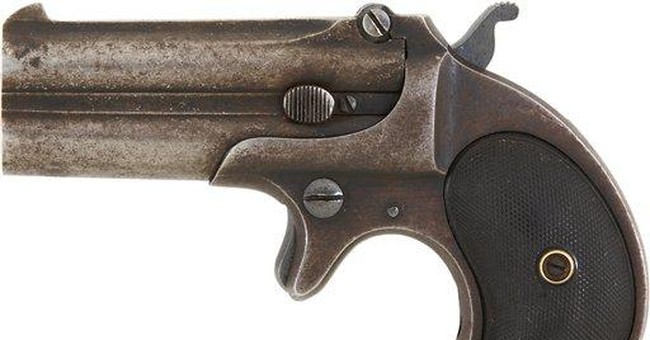 1. Ruger Mark III Hunter (22 Long Rifle). My Ruger Mark II was the most reliable and accurate pistol I have ever owned. After thousands of rounds at the range I passed it on to my nephew. I am replacing it with this new Ruger Mark III. With a barrel nearly seven inches long this will make an excellent varmint hunting pistol. The cocobolo grips have a nice feel – better than the plastic grips on my previous model. I doubt I’ll be giving this one away any time soon. But I may be able to give away some coon skin caps after I take this one out in the woods a few times.

2. Smith and Wesson Model 629 (44 Magnum). I could have used this weapon last summer when I had an unanticipated encounter or two with some black bears in Colorado. There is a temptation to go with a longer barrel for greater accuracy. But with anything longer than five inches it gets harder to find a good holster – not to mention harder to balance while shooting. In addition to bear stopping, this also makes for a good home defense weapon when loaded with the more tame and controllable 44 Special rounds.

3. Remington 870 Tactical (12 Gauge). This shotgun will be a nice replacement for the old 870 Express HD I just gave to a friend. The seven shot tube will allow me to offer two rounds of number 6 birdshot to an intruder before I release five rounds of double-ought buckshot. I can release seven shots pretty quickly so I’m pleased this one has a compensated barrel.

4. Remington 1100 Tactical 4 (12 Gauge). I had a very difficult time choosing between this gun and the Model 870. Fortunately, as I was mulling the decision, the song “Free Will” by Rush (one of my favorite bands, by the way) came on the radio. One line of the song says “If you choose not to decide, you still have made a choice.” So I chose not to decide between the 870 and the 1100. I chose to get them both.

5. Ruger 10/22 Jacaranda laminate (22 Long Rifle). Sometimes I like to buy a gun just because it’s pretty. This one is no exception. I once had a guitar that was made out of this wood. But the guitar couldn’t kill the possums that get into my bird feeders. This one should get the job done. After picking one up and handling it at Bass Pro Shop I knew it felt too good to be kept off this year’s Christmas list.

6. Smith and Wesson M&P .357 Sig. I’m really getting sick and tired of all my friends telling me that their new Smith pistols are better than my Glocks and Sigs. So I’ve decided to buy one in order to get them to shut up. I’m also sick and tired of the whining noise coming late at night from that pack of coyotes that lives in my neighborhood. Actually, they live back in the woods near the inter-coastal waterway. So I’m going to get this full sized Smith M&P before I head out to silence those coyotes. I may not need all fifteen rounds to get the job done but, hey, better safe than sorry.

I’m already anticipating a lot of hate mail from my friends at PETA. But, don’t worry guys, I promise to send you pictures of everything I kill with my new Christmas presents. I may not eat those coyotes or make a coyote fur coat. But at least I’ll be feeding the turkey vultures – unless I get a wild hair and kill some of them, too (just kidding, Ingrid Newkirk.).

I’m also anticipating a lot of not-quite-hate mail from those who think my firearm choices were less than stellar. But I don’t mind those. Just send an email and tell me what you would have chosen instead. There are so many more Christmas lists to come. And so many more animal rights activists to irritate.