How to Make a Sex Tape at Duke 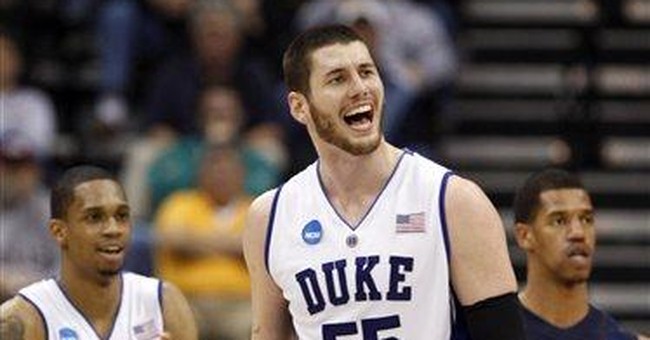 Since 2003, I have written 632 columns – most of which deal with rampant political correctness (read: cultural Marxism) on our college campuses. In response to one of my recent columns, a member of the American Association of University Professors wrote to chastise me for writing about “isolated incidents” that are not representative of the state of higher education.

Maybe I should have named this column “Isolated Incident 633” to remind readers that I haven’t yet accumulated sufficient evidence to draw any firm conclusions about the current political climate on our college campuses. So, for the time being, committed leftists can still question whether the ivory tower leans as much as, say, the leaning tower of Pisa.

This week, another isolated incident – this one from Duke University - came across my desk. It takes the form of a new sexual misconduct policy, which is being promoted by the Duke Women’s Center. Remember, these are the folks who recently prevented a woman from speaking about her experiences as a student and mother. The message that you don’t have to have an abortion to finish your studies at Duke seemed to offend numerous students. This, in turn, led to the cancellation of the event.

At Duke, it seems there is more shame associated with carrying a child to term than getting gang raped at a lacrosse party. This is especially sad because, unlike the latter, the former actually sometimes happens at Duke University.

Thankfully, administrators at Duke have posted online a set of policies regarding sexual misconduct, which, among other things, emphasize the importance of consent in sexual relations. Specifically, the policy reminds us that “Sexual intimacy requires mutual engagement in an environment of mutual consent.”

I guess “mutual consent” was lacking when (now former) Duke administrator/professor Frank Lombard was engaged in “sexual intimacy” with his five year old adopted son. My guess is based on the fact that Lombard was just sentenced to 27 years in federal prison. That’s exactly 27 years more than the Duke lacrosse players received after being accused of rape by one crazy stripper and 88 crazy Duke faculty members – none of whom could muster the courage to accuse Lombard of sexual misconduct after he was actually convicted.

Duke’s sexual misconduct policy also lets us know that rape can sometimes be unintentional. That’s because “yes” can sometimes mean “no.” That is, maybe. It all depends on “real or perceived power differentials between individuals” which “may create an unintentional atmosphere of coercion.

So what have Duke administrators been doing lately (while they aren’t shoving pacifiers into the mouths of mothers to prevent them from speaking or performing sex acts on their adopted children?). They’ve been coming up with policies that make it sound like what happened to the Duke lacrosse players really might not have been so bad. I mean, a black stripper could, after all, perceive a “power differential” while in the presence of a rich white Duke lacrosse player. And that could make her feel like she’s been coerced into something, right?

Duke elaborates on the notion of consent by adding that “The university’s definition of sexual misconduct mandates that each participant obtains and gives consent in each instance of sexual activity.” It isn’t clear whether this means a man must hear the word “yes” every five seconds during "sexual activity".

Things can get confusing, especially when the basketball team is winning. Thankfully, Duke has something to say about such possible confusion: “It is important not to make assumptions; if confusion or ambiguity on the issue arises during the sexual interaction, it is essential that each participant stops and clarifies, verbally, willingness to continue.”

But, of course, people who are in the throes of passion are the least suited to give an objective opinion. That would be like asking Perez Hilton to judge a beauty contest in which he is competing for the title of queen.

For awhile, I thought I had the perfect solution. My solution involved a mandate that all sexual encounters at Duke be recorded and broadcast simultaneously to the Women’s Center. That way, the feminists could serve as sexual referees and contact authorities in the event that a sexual encounter failed to conform to the rules of the student handbook.

But I had to change my mind about my solution after reading the following official Duke University vignette: “Liz and Tom have been together for six months. She often tells her friends stories of Tom’s sexual prowess, and decided to prove it to them. One night, she and Tom engage in consensual sexual intercourse. Without Tom’s knowledge, Liz sets up her digital camera to videotape them having sex. The next evening, she uploads the video to an online video sharing site and discusses it with her friends online. This is a violation of the Sexual Misconduct Policy.”

Of course, almost everyone knows that it’s wrong to videotape someone during a sex act without first getting their consent to the filming. One exception would be now former Duke administrator Frank Lombard who did not get the consent of his five year old before he performed sexual acts upon him live on the internet via webcam. Duke administrators are such experts at making sex tapes that I think it’s time for a new major at Duke called “Sexual Film Studies.” A course called “Sexual Film Ethics” could be taught by Frank Lombard from his prison cell and beamed to the Duke campus via webcam. (Warning: Some scenes not suitable for viewing by small children!).

Duke, to its credit, does inform students that hearings regarding sexual misconduct are not conducted without certain privacy safeguards. The online policy states that “The university will make all reasonable efforts to ensure the preservation of confidentiality, restricting information to those who legitimately need it.”

They also affirm the importance of the presumption of innocence, which was so lacking when the Duke lacrosse players were falsely accused of rape before being gang raped by 88 Duke professors. The policy now says “Accused students can expect a presumption of innocence throughout the disciplinary process unless found responsible through an impartial and fair hearing, and will be treated with respect throughout the process.”

I’m glad Duke has rediscovered the value of the presumption of innocence. Not everyone accused of sexual misconduct at Duke is a gay administrator who performs sex acts on small children. Some are actually upstanding citizens.