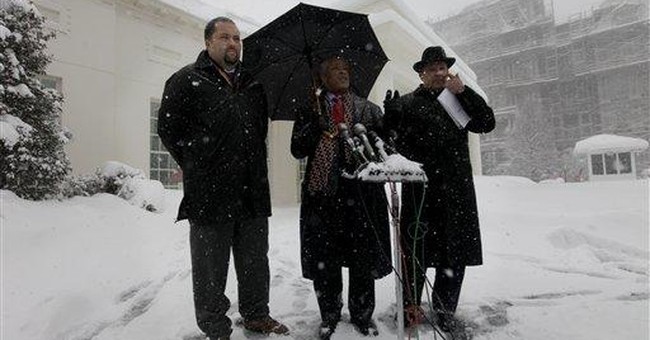 My name is Claire. I am working on a story for the school newspaper, The (UNCW) Seahawk, about Dr. Maurice Martinez and his philosophy regarding Black English in his classroom. I would appreciate the opportunity to ask you a few questions on your views about this issue. I have read your column for Townhall.com and I am very interested in hearing your side of the debate about Black English. Please take some time to think about these questions and get back to me as soon as you have time. Thank you for your time.

Hello Claire. I have some bad news and some good news. The bad news is that I do not do interviews with the school newspaper because it has a 100% rate of error in representing my opinions. This is not because the reporters tend to be stupid. It is because they tend to be liberal and, therefore, tend to suffer from severe moral rather than intellectual hernia. For example, the last time your paper ran a story on one of my opinion pieces it was insinuated that I wished to bomb gay bath houses in San Francisco although there actually aren’t any gay bath houses in San Francisco. Thankfully, the paper stopped short of accusing me of attempting to rape a unicorn.

But there is good news. I am going to respond to all five questions you have submitted by making them the subject of my Monday column on TownHall.com. That way, the paper will not be able to misrepresent my views as they have in the past. TownHall.com is the premier conservative political website in America. So when university administrators try to attack my views it is sort of like Michael Jackson trying to attack Mike Tyson. It also keeps the university newspaper honest.

1. What is your response to Black English being taught in a UNCW classroom? What purpose does it serve to you?

My response is that I am developing a new course proposal to be submitted directly to UNC Wilmington Chancellor Rosemary DePaolo. It will be called EDN 201 “White English.” I’m going to spend an entire semester differentiating White English from Black English and see how long it takes for me to be removed from the classroom.

While I am on leave I will write a book about my experiences. I plan to call it Redneck Jihad: The Art of Sacred Cow Tipping. So my response to your question about “what purpose” this is serving me is simple. I plan to make money off the stupidity of far left professors just as I’ve been doing for years. I plan to use the profits from their stupidity to buy more firearms and go on more hunting trips.

2. Dr. Martinez teaches that one reason for implementing this philosophy is so children who speak this dialect won't be "condemned" for the way the [sic] speak; are his teaching methods an appropriate way to address "No Child Left Behind"?

No, absolutely not. The best way to address “No Child Left Behind” is to repeal it. The Republican Party leaders had it right in the 1980s when they considered eliminating the Department of Education. The federal government has had no business interfering with local schools since we had to send in the National Guard in the 1950s to stop racist Democrats from keeping little black kids from attending the public schools in Arkansas. I think we should get rid of the Department of Education after we first repeal “No Child Left Behind.” That program just proves that George W. Bush was really a big-spending liberal posing as a conservative.

3. Black English is a social dialect that has been defined by sociolinguists, and many claim that more knowledge could be learned to bridge the gap between social dialects and Standard English to help students in school; does this bring validity to Dr. Martinez and his claims, or is his "street talk" best left to the streets?

No, it does not bring validity to Dr. Martinez and his claims. Dr. Martinez was asked to defend his teaching of Black English in the wake of my column last week. This was done at a Black Faculty meeting. Afterwards, a black faculty member who was clearly angry with Martinez called my office. He claimed that Martinez had told them that in his class there were only a few pages of notes on Black English. I sent him the entire 75 page power point presentation. Now, that black faculty member is even angrier with Dr. Martinez.

Dr. Martinez has suffered a very severe and self-inflicted blow to his credibility.

4. Controversy has stemmed from the naming of this dialect: is it racist to label Black English as "Black"?

It is not really racist but it is offensive. But I find the United Negro College Fund to be more offensive. Not to mention the National Association for the Advancement of Colored People. Oh yes, and the Black Faculty meetings at UNCW are offensive, too. Maybe Chancellor DePaolo could reinstate the “white” and “colored” restrooms in the name of diversity, tolerance, and inclusion.

5. In your column, you stated that many parents should request their tuition money back. Why do you feel that Black English is a waste of funds?

It’s the same way with Black English. It is self-evident that it is simply pseudo-intellectual manure. It has no place in higher education.

Thank you again for your time, I appreciate your responses.

No, thank you! I enjoy talking about this. It’s fun to make coins while girding your loins. It’s even better than making scrilla while keeping it rilla!