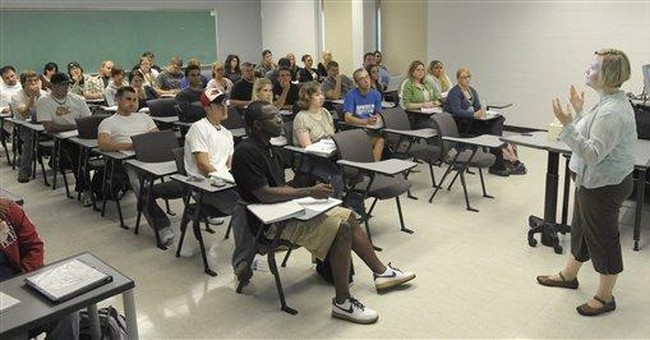 Bert Chapman is an interesting individual. He is the author of a blog called the Conservative Librarian. This is fascinating, as there aren’t many of those in higher education. For some time he has written about political issues without being bothered by the generally narrow-minded students, faculty and staff that populate our institutions of higher learning. But then he decided to talk about homosexuals, the most volatile and intolerant portion of our population, in a negative way. Now some folks are trying to have him fired.

Leading the charge against Chapman is Purdue University Senior Kevin Casimer. He has gone so far as to begin organizing a signature campaign aimed at getting Chapman to resign. He says Chapman is an embarrassment and is harming the university's reputation. But I believe it is Casimer, not Chapman, who is an embarrassment and, therefore, must leave Purdue University in order to protect the school’s reputation.

Chapman deserves respect because he has been a professor since Kevin Casimer was still wetting his pants – that is assuming Kevin Casimer does not still wet his pants when he is exposed to a contrary opinion. Chapman has also written three books. But he is a self-described conservative Christian and thus not seen as worthy of respect by the self- appointed members of the university Gaystapo.

In his October post, "An Economic Case against Homosexuality," Chapman said something I have been saying for years: that money spent on AIDS research would be better spent on cancer and heart research. He has also echoed my concern that the health care debate has not sufficiently addressed the economic costs of homosexual behavior.

Since Chapman does not teach any classes his views could hardly be likely to offend students who are not going out of their way to be offended. Certainly, no one is arguing that he has ever failed to provide reference and research assistance to someone on the basis of sexuality. Had that happened in his 15 years as a professor then the discriminatory conduct could have been addressed directly without interfering with his private free speech rights. But there has been no such misconduct. No one has been injured including those pretending to be offended.

Kevin Casimer lies publicly when he says he and others are not attacking Chapman's right to say what he wants to say. He has already stated that Chapman's views and presence may dissuade students and others from wanting to associate with Purdue. And he has sought to have Chapman removed on the theory that he might discriminate.

But Kevin Casimer’s petition to have Chapman fired is a direct form of discrimination. And that is why he, not Chapman, should be removed from Purdue University.

Many are praising Yvonne Pitts, an assistant professor of history, for supporting Chapman's right to express his views. The reason they are doing so is because Pitts is a lesbian defending speech, which has been seen as anti-gay.

Nonetheless, First Amendment opponent Kevin Casimer has said that he and other likeminded bigots will continue a campaign against Chapman until the university “responds.” And so I am responding to him by starting the “Expel Kevin Casimer” petition today. To add your name, send an email to adams_mike@hotmail.com with the words “Expel Kevin Casimer” in the subject line.

Kevin Casimer believes offensive speech is a basis for removal from a university. So join me in letting him know how offensive his speech is to most Americans. Then perhaps he can speak freely and explain the irony of saying the same rules do not apply to those who declare Holy War against “discrimination” and “intolerance.”