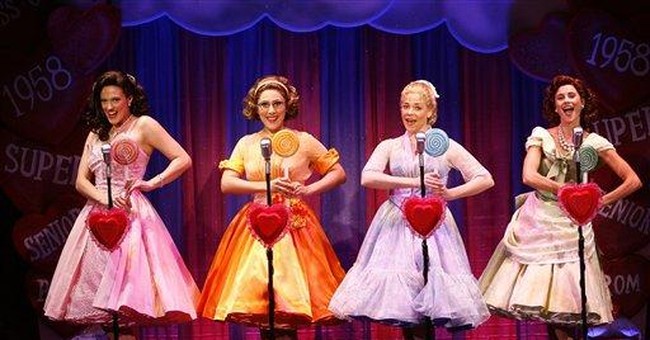 I just got an email from our new Provost telling me that I – like everyone else working at the university – must start attending mandatory sexual harassment awareness training sessions every two years. The good news is that I’m going. The bad news is that I’ve gotten some other angry white men together to help me completely disrupt the training sessions.

On October 20th, there will be a meeting of a new campus group called “Faculty Against Sexual Harassment Initiatives and Sensitivity Training” - or FASHIST. I’m the founder of the new group. And the reason I’ve chosen the name FASHIST is twofold:

1. Our university is moving rapidly in the direction of fascism and we need to turn things around as quickly as possible, and

2. We need to go ahead and call ourselves FASCIST because that’s what the feminists – who don’t actually know what fascism is - will call us when we try to oppose a government-mandated thought control program.

Our first order of business will be to adopt a slogan for the new group. One of the other founding members of FASHIST wants “Hell no, we won’t go” to be the slogan. This is largely due to his contempt for the hippies that work in his department. But I like the phrase “We don’t harass, so kiss our ass!” But I’m concerned that the chancellor will deem the slogan to be itself harassing.

Those who join UNCW FASHIST will not attend the sexual harassment training sessions biannually as has been proposed. We will attend every single one of them. And we will interrupt the meetings – just like the radical protestors of the 1960s – with a lot of tough questions for the administration. Some examples follow:

1. UNCW defines harassment as “unwelcome conduct based on race, color, religion, creed, sex, national origin, age, disability, veteran status or sexual orientation that is either a condition of working or learning or creates a hostile environment.” If the university forces me (unwelcome conduct?) to attend sexual harassment training (based on sex?) as a condition of working at UNCW then, obviously, I’m being sexually harassed. Can we then fire the administration for imposing this mandate?

3. Our university sets lower admission standards for blacks than it does for whites. We don’t do it for the black females who can cut the mustard. We do it for the black males who can’t. But some of the black males we admit on lower standards drive around campus with their windows down blaring rap music denigrating women by calling them whores. Is this hostile environment sexual harassment? Is our affirmative action policy therefore sexually harassing?

4. Five years ago the administration chipped in $60,000 to help bring Ludacris to campus. He sang a lot about hos. Shouldn’t we be forcing the administration to attend mandatory sexual harassment training not the other way around? Is there a short bus that drops these intellectually challenged administrators off at work every day? Certainly, we don’t let these people drive themselves to work.

6. When a female student wears a top that fully exposes her nipples, has she sexually harassed the men in her class? What if they like it? Does that mean only the gay men are sexually harassed? How about the lesbians?

7. What if a feminist professor comes walking up to me in the hall and touches (actually rubs) the lapel of my blazer, looks into my eyes and comments on the softness of the fabric. Does that mean I can rub her blouse without her permission? If so, just how close can my hand get to her breast?

8. What if I get erectile dysfunction after a feminist rubs my lapel. Can I sue for damages?

9. What happens when a gay pride group steals my rainbow – an important Old Testament religious symbol, of course – and converts it to a symbol of approval of acts specifically prohibited by the Old Testament? Is that religious harassment? Or homosexual harassment?

10. Finally, I’ll have something to say about the Professor of Psychology who recently told members of his psychology class that I referred to the Chancellor as a “whore” in one of my columns. That is a lie. But, of course, it doesn’t matter since the university pays for speech that characterizes women as “hos.” But I suspect that many psychologists would tell us that making up a story like that is a form of projection. So maybe the psychology professor subconsciously thinks his boss is a whore. That leads to my final question: Can subconscious misogynistic thoughts be sexually harassing?

Of course, all of those hippies who were protestors in the 1960s have to be excited about my plan to shake things up at UNCW by speaking truth to power. But, unfortunately, many of them have married feminists who won’t let them join an organization like F.A.S.H.I.S.T. For the record, they are the ones I call “whores.”