It's Time for Ingrates to Go

Michelle Malkin
|
Posted: Feb 06, 2019 12:01 AM
Share   Tweet
The opinions expressed by columnists are their own and do not necessarily represent the views of Townhall.com. 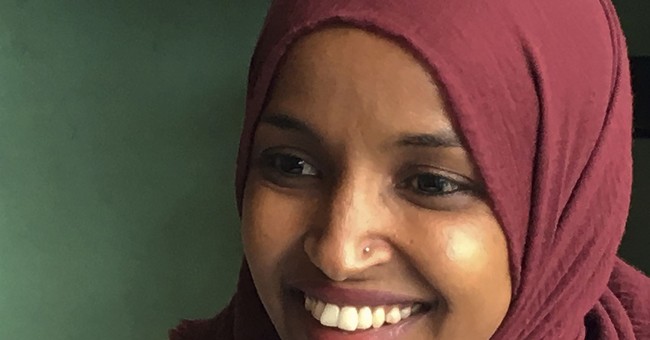 Crying "hate" is a lazy way to debate. But in the Beltway, where honest discussion and vigorous deliberation are desperately needed, the rhetorical sloth is so thick you need a Big Foot circular saw to cut it.

Take Minnesota Democratic Rep. Ilhan Omar, who thrust a Liberian immigrant, Linda Clark, into the limelight as her State of the Union special guest and poster child. "She has lived here over 18 years," Rep. Omar lamented, "and there's no reason she should be taken from her family." Ahead of the annual address to Congress on Tuesday, Rep. Omar blasted President Donald Trump for "threatening to deport" Clark and "thousands of Liberians for no reason other than hate."

Sigh. This is why the White House cannot deal in good faith with the unreasonable party of "abolish ICE!" "no walls!" "amnesty for all!" and "deportation equals hate!" The Democrats have weaponized America's grace against itself.

There is a very simple reason that Omar's SOTU guest and hundreds of thousands like her from 10 different countries have been threatened with deportation. They were allowed to enter, stay and work here because of the extraordinary generosity of the United States of America. And now, after decades of our government's largesse, their time is finally up.

The Temporary Protected Status and Deferred Enforced Departure programs were established as part of the Immigration Act of 1990, signed by President George H.W. Bush. (News flash: Bush was a Republican, but the Resistance smear merchants never let such facts get in the way of their hate hyperbole.) The idea was to create an orderly way to deal compassionately with foreigners who could not return to their home countries due to natural disasters, hurricanes, environmental catastrophes, civil war, epidemics and other "extraordinary and temporary conditions."

TPS designees won three-year renewable passes to live and work here, travel freely and enjoy immunity from detention or deportation. Participants were originally required to provide proof that they arrived here on an eligible date, committed no more than two misdemeanors and no felonies and maintained a continuous presence in the country. But the programs are dangerously rife with unchecked document fraud, including unknown numbers of TPS winners who have used multiple aliases and faked their country of origin to qualify.

And without a fully functioning biometric entry-exit database in place to track temporary foreign visitors, there's no way to track all the TPS enrollees.

As I've reported repeatedly over the past quarter-century, these "temporary" amnesties have become endless, interminable residency plans for unlawful border crossers, visa overstayers and deportation evaders from around the world. They are not, and never were, entitled to be here. Entry into our country is a privilege, not a right. That's not "hateful." It's the stance that every modern, industrialized sovereign nation takes toward noncitizens.

Trump is the first commander in chief to challenge the temporary-in-name-only farce since the creation of the program. At least 3,700 Liberians like Clark have been here since 1991 on TPS because of civil wars that ended 16 years ago. President Bill Clinton first ordered Deferred Enforced Departure (discretionary deportation delays) for this group in 1999, arguing that the country was still unstable. Nineteen years later, after multiple extensions by Presidents Bush and Obama, Trump finally determined that it was safe for these guests to return to their homeland.

But instead of thanks and farewell, the beneficiaries of our country's humanitarian TPS and DED policies like Linda Clark and their Democratic enablers like Rep. Omar are clinging bitterly and hurling invectives at leaders who take our laws and borders seriously. The disgruntled "victims" have an army of ACLU lawyers helping them sue to avoid deportation and a phalanx of open borders journalists to drum up public sympathy for their plights. Next week, they'll be marching on Washington, pounding their drums and shaking their fists as they demand green cards and citizenship.

What other nation in the world has been so foolishly tolerant of so many foreign ingrates and agitators overstaying their welcome? If President Trump can't pull the plug on this interminable charade, no one can. Once again, my old adage will prove true: There is no such thing as a "temporary" amnesty.