Michelle Malkin
|
Posted: Jan 17, 2018 12:01 AM
Share   Tweet
The opinions expressed by columnists are their own and do not necessarily represent the views of Townhall.com. 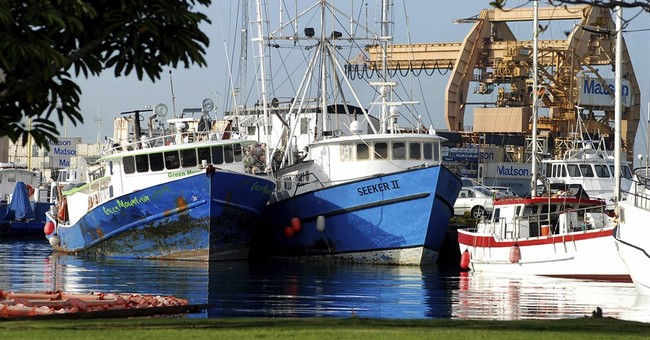 My fondest childhood memories come from fishing with my dad on the creaky piers and slick jetties of the Jersey shore. The Atlantic Ocean is in my blood. So when fishing families in New England reached out to me for help spreading word about their economic and regulatory struggles, I immediately heeded their call.

Now, these "forgotten men and women" of America hope the Trump administration will listen. And act.

The plague on the commercial fishing industry isn't "overfishing," as environmental extremists and government officials claim. The real threats to Northeastern groundfishermen are self-perpetuating bureaucrats, armed with outdated junk science, who've manufactured a crisis that endangers a way of life older than the colonies themselves.

Hardworking crews and captains have the deepest stake in responsible fisheries management -- it's their past, present, and future -- but federal paper-pushers monitor them ruthlessly like registered sex offenders.

Generations of schoolchildren have been brainwashed into believing that our seas have been depleted by greedy commercial fishermen. In the 1960s and 1970s, it is true, foreign factory trawlers from Russia and Japan pillaged coastal groundfish stocks. But after the domestic fishing industry regained control of our waters, stocks rebounded.

Reality, however, did not fit the agenda of scare-mongering environmentalists and regulators who need a perpetual crisis to justify their existence. To cure a manufactured "shortage" of bottom-dwelling groundfish, Washington micromanagers created a permanent thicket of regional fishery management councils, designated fishing zones, annual catch limits, individual catch limits and "observers" mandated by the Magnuson-Stevens Act.

Even more frustrating for the fishing families who know the habitat best, the federal scientists' trawler surveys for assessing stocks use faulty nets that vastly underestimate stock abundance.

Meghan Lapp, a lifelong fisherwoman and conservation biologist, points out that government surveyors use a "net that's not the right size for the vessel," which produces "a stock assessment that shows artificially low numbers. The fishing does not match what the fishermen see on the water."

Instead of fixing the science, top-down bureaucrats have cracked down on groundfishermen who fail to comply with impossible and unreasonable rules and regulations. The observer program, which was intended to provide biological data and research, was expanded administratively (not by Congress) to create "At Sea Monitors" who act solely as enforcement agents.

Yes, Big Brother dispatches a fleet of spies to track and ticket commercial fishing families while they work. And the biggest slap in the face? New England groundfishermen have to pay for it. A study done by the National Marine Fisheries Service estimates the program costs about $710 per day or $2.64 million per year.

Last fall, I visited the Williams family, which owns two fishing vessels based in Point Judith, Rhode Island, and Stonington, Connecticut, to see the crushing impact of this ever-intrusive bureaucracy for myself. Patriarch and small-business owner Tom Williams Sr. began fishing with his father-in-law in the 1960s. Son Tom Jr. captains the Heritage, which harvests cod, flounder and haddock. Son Aaron operates the Tradition, which harvests scup, whiting, squid and sea bass. Grandson Andrew, 20, is the fourth-generation fisherman in the family.

"What we do is feed America," soft-spoken Tom Sr. told me. "We're not just indiscriminately raping the ocean, we're trying to feed people -- feed them good, healthy, quality fish."

Long before he departs from the dock, Tom Jr. must seek permission to do his job.

"Before we sail, we have to do declarations on our boat tracks, which is a vessel monitoring system," Tom Jr. explained. "We have to declare what areas we're going to be fishing in. We also have to submit a sector-trip start hail and operator's permit number. ... (Then) you have to submit a daily task report, what area you were in, and all the species that you caught."

On top of all that, an at-sea observer boards the Williams' boats and bunks in tight quarters with the crew, looking over their shoulders at every turn. Over the years, the expanding reach of regulators has become overbearing and, as brother Aaron described it, "humiliating."

David Goethel, a boat captain and research biologist who served on the New England fishery management council, sued to overturn the unfunded at-sea monitoring mandate. But he was rebuffed by the U.S. Supreme Court last fall because he filed the suit too late.

He worries not only about his survival and the fate of the New England groundfishing industry, but about the precedent this power and money grab has set.

"There's nothing to stop other government agencies from doing an end-run on Congress to get a budget increase by passing off their regulatory cost to the regulated public," Goethel warned.

For his part, 20-year-old Andrew Williams hopes someone in Washington will ignore the environmental propaganda he has been taught in the classroom and get the facts.

Working on the seas "is all I ever known," he told me. "It started when I was 8 years old, and I never thought about doing anything else."

Like his family, neighbors and crewmates, he is hoping President Donald Trump can help make commercial fishing great again by getting government out of the way.