The Slacker Mandate and the Safety Pin Generation

Michelle Malkin
|
Posted: Nov 16, 2016 12:01 AM
Share   Tweet
The opinions expressed by columnists are their own and do not necessarily represent the views of Townhall.com. 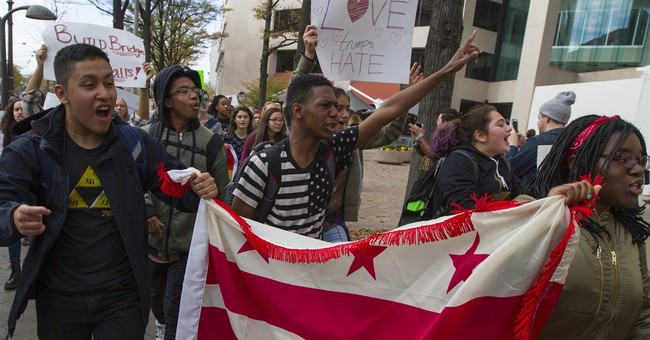 Donald Trump gets it -- somewhat. He vows to repeal Obamacare's most burdensome federal mandates that are jacking up the price of private health insurance. But he also plans to preserve the most politically popular provisions of the Orwellian-titled Affordable Care Act, including the so-called "slacker mandate." It's the requirement that employer-based health plans cover employees' children until they turn 26 years old.

Is it any wonder why we have a nation of dependent drool-stained crybabies on college campuses who are still bawling about the election results one week later?

Trump briefly mentioned during a "60 Minutes" interview on CBS this weekend that the slacker mandate "adds cost, but it's very much something we're going to try and keep." That's because most establishment Republicans in Washington, D.C., are resigned to keeping it. Once the feds hand out a sugary piece of cradle-to-grave entitlement candy, it's almost impossible to snatch it back.

Who pays for this unfunded government mandate? As usual, it's responsible working people who bear the burden.

Earlier this year, the National Bureau of Economic Research found that the No Slacker Left Behind provision resulted in wage reductions of about $1,200 a year for workers with employer-based insurance coverage -- whether or not they had adult children on their plans. In effect, childless working people are subsidizing workers with adult children who would rather stay on their parents than get their own.

Moreover, according to company surveys and other economic analysis, the slacker mandate has resulted in overall increased health care costs of between 1 and 3 percent. The nonpartisan American Health Policy Institute reported one firm's estimate of millennial coverage mandate costs at a whopping $69 million over 10 years.

At the time the federal slacker mandate was adopted in 2010, some 20 states had already adopted legislation requiring insurers to cover Big Kids -- some up to age 31!

In Wisconsin, the slacker mandate covered not only adult children, but also the children of those "children" if they lived in single-parent homes. In New Jersey, champions of the provision claimed it would help cover 100,000 uninsured young adults. But health policy researcher Nathan Benefield of the Commonwealth Institute reported that "only 6 percent of that estimate has been realized" in its first two years. "The primary reason -- health insurance is still too expensive."

That has only gotten worse, of course, as Obamacare's other expensive mandates -- especially guaranteed issue for those with pre-existing conditions -- sabotage the private individual market for health insurance, leaving young and healthy people with fewer choices, higher premiums and crappier plans. The solution is not more mandates, but fewer; more competition, not less.

The Obama White House will brag that the slacker mandate has resulted in increased coverage for an estimated 3 million people. As usual with Obamacare numbers, it's Common Core, book-cooked math. Health care analyst Avik Roy took a closer look and found that the inflated figure came from counting "(1) young adults on Medicaid and other government programs, for whom the under-26 mandate doesn't apply; and (2) people who gained coverage due to the quasi-recovery from the Great Recession."

To add insult to injury, another NBER study found that roughly 5 percent of people younger than 26 dropped out of the workforce after the provision was implemented. They used their spare time to increase their socialization, sleeping, physical fitness and personal pursuit of "meaningfulness."

Then there are the hidden costs of the millennial mandate: the cultural consequences. All this "free" stuff, detached from those actually paying the bills, reduces the incentives for 20-somethings to grow up and seek independent lives and livelihoods. Why bother? The societal sanctions have been eroded.

Now, the nation is suffering the consequences of decades of that collective coddling. Precious snowflakes can't handle rejection at the ballot box or responsibilities in the marketplace. Appropriately enough, the new virtue signals of tantrum-throwing young leftists stirring up trouble are safety pins -- to show "solidarity" with groups supposedly endangered by Donald Trump.

Safety pins are also handy -- for holding up the government-manufactured diapers in which too many overgrown dependents are swaddled.