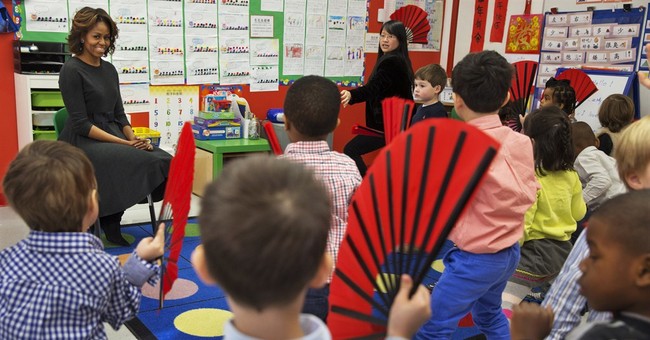 Trending
It's back-to-school season across the country. But in an increasing number of districts, "back to school" doesn't mean back to learning. Under the reign of social justice indoctrinators, academics are secondary to political agitation. Activism trumps achievement.

In Massachusetts, the John J. Duggan Middle School will open on August 25 with a new name and mission. It is now a "social justice magnet school." As a hiring advertisement for teachers explained earlier this year, the emphasis will be on "helping students develop the necessary skills to analyze and synthesize information and to generate empathy by looking at multiple sides of important issues facing the world, be that hunger, water quality, racial barriers, child labor or imbalance of power."

Concise writing, as you can see, is not on the social justice pedagogues' agenda.

Oh, and forget about memorizing times tables or mastering the scientific method. The new principal says the school's primary job is teaching "fairness." Duggan Middle School's junior lobbying factory is "serious about creating 21st century global citizens, and it begins with understanding who we are as members of each of those communities."

At the Crescent Heights Social Justice Magnet School in Los Angeles, children will work on "action projects" tied to the "United Nations Millennium Development Goals." Students will spend the academic year transforming into "agents of change." Yes, they will learn language arts. But basic reading and writing are only a focus of the magnet school, the founders explain, because "we want our students to recognize injustice in their world or the world at large and be able to fully express their outrage, their plan of attack, their progress in this endeavor."

"Through collective community power, we commit to a conscious effort to overcome the intended historical obstacles that have been designed to disempower and divide our communities."

His acolytes explain the push for radicalization of math: "Math is an instrument for detailing social justice issues and developing critical consciousness." In the hands of progressive teachers, math "becomes an analytic tool to bring awareness to important world issues."

In other words: One plus one equals "That's unfair!"

State education codes mandate value neutrality in the classroom. But in schools of "social justice," every academic subject is a means to a "progressive" (anti-American, pro-collectivist, redistributive) ideological end. The radical transformation of K-12 classrooms into leftist agitation labs is embedded in the mission of countless teachers colleges and universities, which require social justice training or offer special certification in its indoctrination techniques.

These teaching institutions are pumping out generations of educators who cast themselves as leaders against "social struggle" -- instead of facilitators of intellectual inquiry. Passing the most rigorous student standards in the world won't amount to squat as long as the overseers of public education exploit government schools as community organizing vehicles for captive tots, tweens and teens.