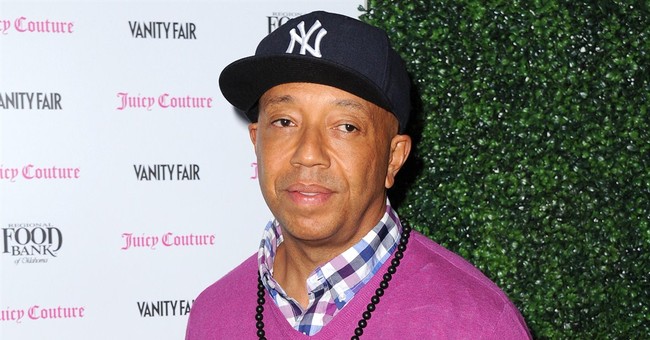 Oh, what a tangled web libs weave when first they practice to aggrieve!

Let's review: Democrats and civil rights leaders are busy conducting a ridiculous witch hunt against a harmless Missouri rodeo clown who dared to wear an Obama mask. Oprah played the race card on a Swiss shop owner, whom she dubiously accused of denying her a look at a $35,000 handbag because she is black. P.C. mau-mau-ers steamrolled Paula Deen over three-decade-old comments. And feminists continue smearing Republicans as "War on Women" misogynists, while enabling Democratic perv predators Bob Filner and Anthony Weiner for years.

He's "Def" all right. Tone Def as a doorknob. Social media users of all races and political backgrounds immediately rose to condemn the pornographic skit degrading an American heroine.

Adrienne Gravish wrote: "I am livid and disgusted. I actually feel like (vomiting). Utter disrespect of Harriet Tubman's legacy and what she fought for." Roland Martin wondered: "Do ya even understand the degradation of Black women during slavery? They were RAPED!" Zerlina Maxwell pushed back against Simmons' "sex tape" spin: "Dear Everyone: It's not a sex video. Stop putting "sex" in your headlines about Harriet Tubman. #rapetape"

Britni Danielle of clutchmagonline.com summed it up: "Casting an obese Harriet Tubman to play into of the negative stereotypes about Black women's bodies? Check. Portraying Black women as Jezebels who use sex to get what they want? Check... This video is not only completely unfunny, but it's a slap in the face to Harriet Tubman, as well as the millions of enslaved African Americans who suffered through the unspeakable horrors of slavery."

But instead of calling for public boycotts, protests and Justice Department investigations, the NAACP grievance-mongers helped Simmons out by privately advising him to take down the video. The tolerance mob's crusaders against rodeo clowns couldn't let a rape video clown knock them off message!

Simmons obliged Thursday morning with a non-apology apology on his media website, GlobalGrind.com (better known for posting naked photos of Rihanna and Lindsay Lohan). He audaciously invoked his liberal immunity card: "When my buddies from the NAACP called and asked me to take down the Harriet Tubman video from the All Def Digital YouTube channel and apologize, I agreed. I'm a very liberal person with thick skin. ... I can now understand why so many people are upset. I have taken down the video. Lastly, I would never condone violence against women in any form, and for all of those I offended, I am sincerely sorry."

Never condoned violence against women in any form? Longtime observers of Simmons' rise to entertainment-industry power beg to differ. He built his profanity-laced rap empire on sexual degradation, misogyny and violence. Called out by a small number of black feminists, spirituality expert Simmons whined during a promotional interview: "I had a book tour about peace and love, and everyone wants to talk about b*tches and hos."

Sincere? On Twitter, his tone was decidedly snarkier: "I guess I have a sensitivity chip missing. Lol. Haven't been in trouble since defjam. Sorry if people r hurt :-("

Simmons has lectured me personally about civil discourse and has shown his misogynist colors. When I called him out during his gun-control jeremiads last year for lying about not using bodyguards, he accused me of being a "stalker" and tweeted: "U are so cute, like a lil kitten :-) why so angry?"

When my website Twitchy.com supported parents who teach their daughters to shoot and published photos of their trips to the gun range, Simmons deemed it "shocking" and insinuated that parents like me who school our girls in self-defense are irresponsible.

Simmons pontificated: "this morning i meditated with my beautiful daughters. shocking that these parents let their kids do this..."