Marion Barry and the Left's Hatred of Asian Entrepreneurs 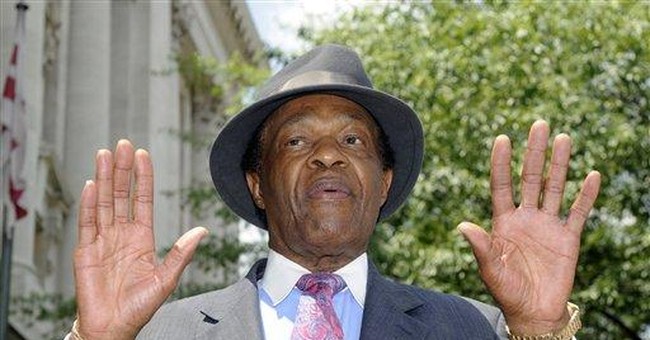 Marion Barry's mouth set him up. The disgraced former mayor of Washington, D.C., who was caught on tape in a 1987 crack cocaine sting, made an even bigger disgrace of himself and his city on Tuesday. Celebrating a Democratic primary victory, the city councilman attacked small businesses owned by "Asians" in his district. Then the race-baiting clown doubled down.

Barry told supporters in D.C.'s Ward 8: "We got to do something about these Asians coming in and opening up businesses and dirty shops. They ought to go." Once pushed out, Barry promised, he would replace the foreign invaders with "African-American business people." Barry then took to the social networking platform Twitter to expound on the perils of "dirty" Asian shops in his neighborhood.

As documented by my Twitter curation start-up Twitchy.com, Barry posted photos of supposedly hazardous stores -- including Chinese restaurants surrounded not by trash or toxic waste, but by Plexiglas barriers and reinforced doors. Barry explained that Asian-owned businesses that had the audacity to protect themselves from crime were "lowering standards" in his constituents' communities.

In Barry's bizarre world, law-abiding entrepreneurs who take steps to prevent robberies are the ones who threaten Ward 8's quality of life -- not the armed thugs who threaten honest livelihoods in the first place. Vigilant wealth creators taking care of their families? Scourge of D.C. Profanity-spewing drug addicts inciting hatred against successful achievers of the American Dream? Model citizens!

Crazy Barry doesn't just need another round of rehab. He needs a reality check.

If Barry's ignorant slurs had come out of the mouth of, say, former GOP Gov. George Allen of Virginia (pummeled for his "macaca" gaffe), there would be calls for his head from every civil rights organization in the Beltway. While the Washington Post reported that Barry "apologized," he showed typical fake penitence for "offending" Asians and claimed he was "taken out of context."

By "Asian," he blubbered to a local TV reporter, he didn't mean "Asian." He really meant all "those persons (who) come into our community, whatever color they are; it happened to be Asian initially." Put the prejudice pipe down, buddy.

Instead of showing true remorse, Barry dug in deeper with even more divisive, entitled and militant us vs. them propaganda: "We're spending our money there, and we demand respect," he told the Washington Post. "We demand they participate in community affairs. We demand they give jobs to Ward 8 people regardless of their cultural situation. That's as American as apple pie."

But Barry's not alone. His incendiary rhetoric echoes other liberal black leaders who have long made a sport of scapegoating Asian immigrant entrepreneurs across the country. Just this February, Jeffery Muhammad, the veteran Nation of Islam leader in Dallas, lashed out at Asian-American business owners for being "just the latest in a long line of people who have come to this country -- like Jews, Italians, Indians and now Asians -- who have sucked the blood of and exploited the black community."

Just a fringe sentiment, you say?

So they watch every damn move that I make.

or your little chop suey ass'll be a target

of the nationwide boycott.

"We're the black chicken friers of the universe. We gonna go buy some Col. Sanders chicken. Then the Chinamen comin' and (inaudible) ... Koreans sell us watermelons. We eat watermelons all our lives. But they gonna come cut it up, put it in a bucket with a rubber band around it, and we gonna buy it like it's somethin' and we didn't know what it was."

Few dare to call out black racism against Asians. Those who do are met with nasty racial epithets, of course. Last year, when I called attention to flash mobs of black assailants in Denver, Wisconsin, Philadelphia and New York who were explicitly targeting Asian students and elderly Asian women for brutal assaults, my e-mail box filled with vitriol:

"(D)oes your family still live in poverty? Not anymore, since you married into the tribe ME LOVE YOU LONG TIME GI."

President Obama, commander-in-chief of post-racial America, was unavailable for comment.