Homegrown Hate Crimes Against our Troops 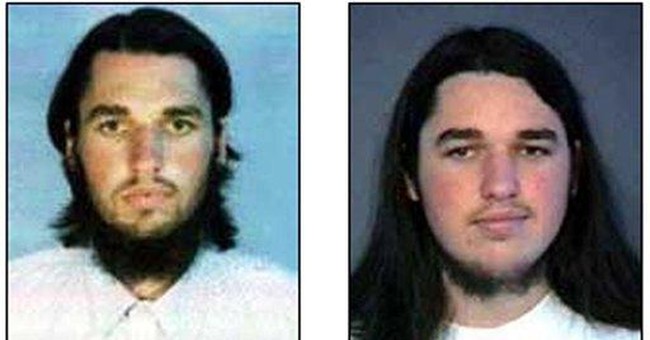 The Fort Hood massacre has faded from view. The Little Rock Army recruiting station ambush barely registered on the national radar screen. And the arrest this week of a Baltimore-area bomb plotter, intent on blowing up a military center and murdering our troops in the name of Allah, was met with a collective shrug. It's pointless to rally citizens around "never forget" when their heads are in the sand.

Civil liberties absolutists are more outraged by the alleged "entrapment" of Muslim convert Muhammad Hussain than by his bloodthirsty scheme to blow up an Army recruitment office in Maryland. According to the FBI affidavit, Hussain "indicated that if the military continued to kill their Muslim brothers and sisters, they would need to expand their operation by killing U.S. Army personnel where they live. He stated that jihad is not only in Afghanistan or Pakistan, but also in the United States." Hussain explored using rifles, gas, propane tanks and vehicle bombs to maximize death. He planned to "shoot everybody in the place" and burn down the building to "instill fear" and to send a message that "(w)hoever joins the military, they will be killed."

In tape-recorded undercover conversations, Hussain praised Fort Hood gunman Nidal Hasan -- even though he "only killed 13 soldiers" (and one unborn baby). The admiring Hussain had far more ambitious designs. He planned to "blow one recruiting center up ... then we hit another ... and just keep it movin'. ... Insha' Allah. ... Insha' Allah. ... Do it for jihad."

Next, Hussain told informants, he would take on Andrews Air Force Base, blow it up and then take over the homes of military personnel. Hussain wasn't bluffing. He followed through with his plot and was arrested in an FBI sting on December 8 outside the Army center. Hussain had attempted to detonate what he thought was an explosive device parked where soldiers had gathered deliberately.

If Hussain's targets had been abortion clinics, we'd hear no end of denunciations of the hatred and intimidation. Indeed, when Little Rock jihadist Abdul Hakim Mujahid Muhammad was arrested in June 2009 for the murder of Army Pvt. William A. Long, 23, and the shooting of Pvt. Quinton Ezeagwula, 18, it took three days for the White House to issue a limp, politically correct statement expressing "sadness" over the attacks, which President Obama opaquely described as a "senseless act of violence" (instead of the intentional systematic act of Islamic terrorism that it was). In the same week, the Obama administration issued an immediate condemnation and statement of "outrage" over the shooting death of late-term abortionist George Tiller.

Some enemies get Obama a little more "wee-wee'd up," to borrow his phrase, than others.

How many more arrests of U.S. military-hating Muhammads will it take for "sadness" to evolve into genuine indignation? The latest Baltimore plot comes as the Beltway area remains under alert for an unknown shooter targeting recruitment stations and other military targets. Over the past two months, the D.C.-area Marine Corps Museum, the Pentagon, a vacant Marine Corps recruiting station in Chantilly, Va., and a Coast Guard recruiting station in Woodbridge, Va., have all taken shots from a high-powered rifle linked by ballistics tests. The feds say the arrest of the Baltimore jihadist is not related to these still-unsolved acts of terror.

Our soldiers, God bless them, carry on without protests or grievance-mongering because that's just how they roll. But it's a damned shame more Americans can't muster as much anger over troop-targeting "Allahu Akbars!" as they do over "Dancing with the Stars."