The Slaughter on the Southern Border 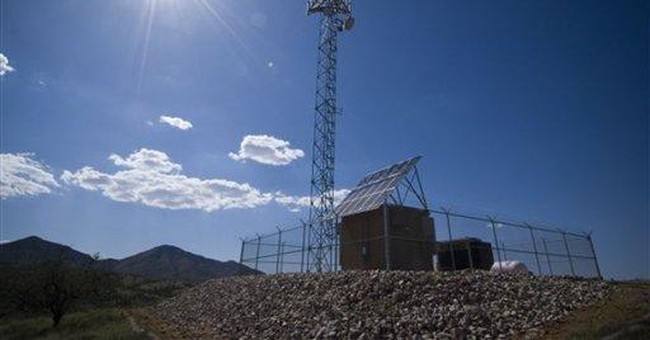 At a joint press conference with Mexican President Felipe Calderon last year, President Obama vowed to make ending border violence a "top priority." How's that hope and change working out? Drug-related crime is out of control, the State Department is warning spring-break vacationers to avoid the Mexican states of Durango, Coahuila and Chihuahua, and the bloodshed has now reached the U.S. consulate's office.

A young American consulate worker and her unborn baby were slain this weekend in Mexico, along with her U.S. detention officer husband and the Mexican husband of another consulate worker. The wanton murders appear to have been a coordinated drug cartel hit; the victims had all just left a children's birthday party in Juarez and were headed across the border back into Texas. The pregnant American official, Lesley Enriquez, is reportedly the first consulate employee to die in drug-related violence since 1985. Her 7-month-old daughter, terrorized by the gunfire while strapped in her car seat, was the lone survivor of the attack.

The State Department has now authorized the evacuation of dependents of U.S. personnel in six Mexican cities along its northern border with the U.S. And the resort town of Acapulco saw at least 13 murdered over the past week -- including four beheadings. The total death toll over the past three years is nearing 20,000.

Mexican government officials have been quite content to blame their neighbors for the outbreaks; to play the race card; to demand blanket amnesty for illegal aliens from their country trying to flee the violence and misery; and to collect massive infusions of U.S. aid that have fallen into the wrong hands. The question for this White House is: How many more Americans will be targeted for execution before we stop rewarding such fatally arrogant behavior?

Reminder: With bipartisan support, the Bush administration handed over $1.6 billion to help Mexico control its border chaos in 2008. The crime-fighting package known as the "Merida Initiative" funded helicopters, surveillance equipment, computer infrastructure, the expansion of intelligence databases, anti-corruption initiatives, human rights education and training, and an anti-money laundering program for our southern neighbors.

President Obama accelerated the release of Merida Initiative cash to Mexico and tossed even more taxpayer funding into the mix. All of this while our own measly border enforcement initiatives have been shortchanged, demagogued or completely abandoned.

Critics of the Merida Initiative (including yours truly) warned that lax oversight would lead to inevitable plundering of the money by corrupt Mexican government officials and more unabated bloodshed. Calderon cried "racist!" and demanded that the aid be forked over with no strings attached: "Give it to me. And give it to me without conditions," he told Congress.

Well, who's watching over the program now? Who's measuring its success or failure? Judging from the endless pile of corpses and horrific headlines, the Merida Initiative has turned out to be a boon and a boondoggle for the Mexican thugocracy. The civilian police force is notoriously under the thumb of the drug networks across the country. Infiltrators have penetrated at all levels.

The Brookings Institution warned two years ago: "Multiple Federal agencies have earned a reputation for ineffectiveness and corruption; among them, the Attorney General's Federal Investigative Agency, the Ministry of Public Security's Federal Preventive Police Force, the Ministry of Government's Center for Investigation and National Security and the Ministry of Finance's Customs Administration. … State security agencies and the courts have not protected the citizenry effectively. According to surveys carried out by Transparencia Mexicana, the police and justice system are perceived as having worse problems of corruption and inefficiency than other public agencies."

Yet, Secretary of State Hillary Clinton says the lesson of this weekend's killing spree is that the U.S. needs to work even closer with the Calderon administration -- and at least one House Democrat in Texas, Henry Cuellar, is calling for a second Merida Initiative package. This is a recipe for an even bloodier Mexican Drug Cartel Stimulus Package.

If you subsidize it, you'll get more of it. Loco.