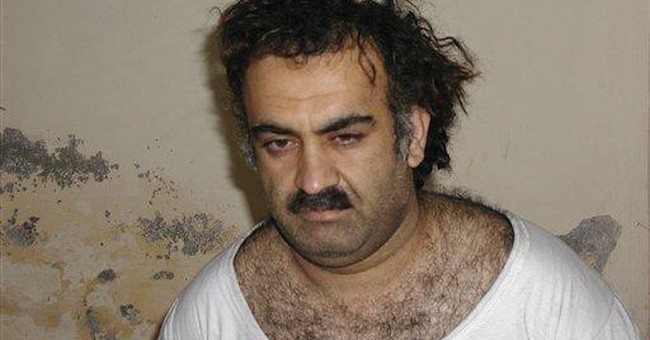 Imagine this nightmare courtroom scenario: Unhinged Jew-bashing, open mockery of American soldiers, juror intimidation and coldly calculated exploitation of U.S. constitutional protections by a suspected al-Qaida defendant. Well, there’s no need to wait for the Gitmo terror trial circuses. New York City is already getting a glimpse of the future.

Jihadi scientist Aafia Siddiqui is on trial right now in a federal Manhattan court for the attempted murder and assault of U.S. military personnel in Afghanistan’s Ghazni province two years ago. She’s an accomplished Karachi-born scientist who studied microbiology at MIT and did graduate work in neurology at Brandeis University before disappearing in the wake of the 9/11 attacks.

Siddiqui was identified as an al-Qaida operative, financier and fixer by no less than 9/11 mastermind Khalid Sheikh Mohammed during U.S. interrogations. Al-Baluchi is KSM’s nephew. Mohammed reportedly enlisted Siddiqui in a Baltimore-based plot to bomb gas stations, fuel tanks and bridges, and to poison water reservoirs in the greater Washington, D.C., area. Siddiqui was taken into custody in Ghazni in July 2008 after attempting to shoot U.S. military interrogators and FBI agents.

Now, the savvy “Terror Mom” of three is pulling out all the stops to win a mistrial. Among her Cirque du Jihad antics:

-- Demanding that jurors be genetically tested for a “Zionist or Israeli background” to ensure a fair and impartial jury of her Jew-hating peers.

-- Screaming out loud during the testimony of U.S. Army Capt. Robert Snyder, who was in the room in Ghazni when Siddiqui allegedly grabbed an M-4 rifle and proclaimed, “Allahu Akbar!” and “I hate Americans! Death to America!” Before being ejected from the courtroom, Siddiqui shouted to Snyder, “You’re lying!” She also babbled about torture at a secret prison.

-- Blurting out “I feel sorry for you” to the witness in front of the jury before being led out of the courtroom again.

Siddiqui’s defense team, funded in part by the Pakistani government, asserts that Lady al-Qaida is so mentally ga-ga that she should not be allowed to take the witness stand. Bleeding-heart human-rights groups have dutifully rallied around Siddiqui. She’s Mumia Abu-Jamal in a burqa. Indeed, her supporters have launched their own “Free Aafia” campaign. But two government-retained psychiatrists, working independently, determined last year that Siddiqui’s so-called symptoms of mental illness were attributed to “malingering” and “manipulation.” The judge in the case concluded that she is competent and understands full well the charges against her.

The Crazy Jihadi tactic is in perfect sync with the al-Qaida training manual advising its operatives to claim victimhood status if arrested and put on trial. This act is also in keeping with a long tradition of terror defendants invoking the insanity card -- from “20th hijacker” Zacarias Moussaoui (whose lawyers chalked up his mass-murdering ambitions to a traumatic childhood) to Fort Hood shooter Nidal Hasan (whose defense will undoubtedly play up his lonely bachelorhood).

To make matters worse, the New York Post reported this week that an “unidentified man in a white headdress” mouthed an obscenity at the Siddiqui trial and cocked his finger like a gun at two jurors. The jurors were let go; it remains unclear whether the thug in white headdress will be charged and what relation, if any, he has to Siddiqui.

Would you answer a jury summons knowing you could end up sitting in front of a jihadi sympathizer on the loose who is mentally painting a target on your forehead? And would you trust the White House ringmasters and Justice Department terror-coddlers to protect you from harm?

These suspects belong in controlled military tribunals, not federal courtrooms that are being turned into al-Qaida P.R. platforms. The O.J. Simpson spectacle of a smirking murder suspect, preening defense attorneys, a showboating judge and the judicial process run amok on cable TV 24/7 was bad enough. The 1993 World Trade Center bombing trial, which gave the bin Laden network a multimillion-dollar tax-subsidized legal team, free translation services, personal dry-cleaning services, race-baiting defense witnesses and access to information that was allegedly used by jihadists to evade surveillance, was even worse.

The specter of 10, 15, 20 Siddiqui-style courtroom carnivals -- at a cost of at least $1 billion to taxpayers -- threatens to throw our civilian court system into complete chaos. America can’t afford to clown around with national security.