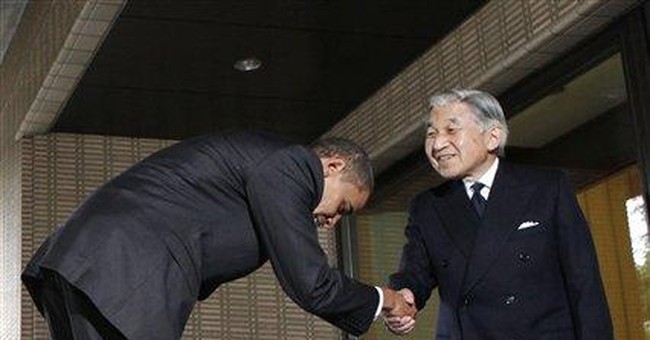 President Obama traveled all the way to China to praise the free flow of information. It's the only safe place he could do so without getting heckled. With a straight face, Obama lauded political dissent and told Chinese students he welcomed unfettered criticism in America. Fierce opposition, he said, made him "a better leader because it forces me to hear opinions that I don't want to hear." How do you say "You lie!" in Mandarin?

While the kowtower-in-chief's press shop feeds paeans to free speech into Obama's globetrotting teleprompter, the White House is still waging war on vocal foes at home. Obama has lectured his critics in Washington to stop talking and "get out of the way." He has stacked his carefully staged town halls with partisan stooges and campaign plants throughout the year. The president recently derided limited-government activists in the Tea Party movement with a vulgar sexual term used by left-wing cable host Anderson Cooper on CNN and the MSNBC smear merchants (just Google "teabagging" and you'll see what they mean).

There are now more muzzled watchdogs in the Obama administration than on the sidelines of the Westminster Kennel Club show.

Most recently, two EPA lawyers critical of the "fatally flawed" cap-and-trade system -- peddled by their agency, the White House and the Democratic majority -- were told by their superiors to yank a video they posted to YouTube explaining their views. Despite including a caveat that the opinions expressed were their own and not the agency's, the couple faces possible disciplinary action by the feds. While demanding the video be yanked, the EPA disingenuously claims it tolerates all dissenting views of its employees.

The clampdown follows on the heels of the Obama EPA's stifling of veteran researcher Alan Carlin's dissent. He dared to challenge the agency's reliance on outdated data to support its greenhouse gas "public endangerment" finding. Carlin's report was squelched; his office is now on the chopping block.

In China, O proclaimed himself "a big supporter of non-censorship." But his FCC "diversity" czar, Mark Lloyd, is bent on re-engineering public airwaves by redistributing free speech rights from conservative haves who earned their success to minority have-nots who demand talk radio entitlements in the name of "media justice."

And among Obama's closest advisers is a husband-and-wife duo who specializes in marginalizing and stifling the Democratic Party's most effective enemies. Just days after White House interim communications director Anita Dunn -- the administration's resident Mao cheerleader and Fox News-basher -- stepped down to take a planned role as a "consultant" behind the scenes, her husband, Robert Bauer, stepped up and shoved aside White House counsel Greg Craig.

The problem? Former Clinton lawyer Craig wasn't tough enough for Chicago-on-the-Potomac. Obama needed an intimate ally who will put hardball politics ahead of policy and the law. Bauer fits the bill.

During the 2008 campaign, Bauer pooh-poohed GOP complaints about voter fraud. While decrying the Republicans' "fear message," it was Bauer who was on a fear-inducing crusade -- pulling out all legal stops to silence conservative critics of Obama's ties to the radical left.

As I've noted previously, and in light of Obama's self-serving praise for political dissent abroad, I note again: It was Bauer who lobbied the Justice Department unsuccessfully last fall to pursue a criminal probe of American Issues Project (AIP), an independent group that sought to run an ad spotlighting Obama's ties to Weather Underground terrorist Bill Ayers.

It was Bauer and his legal goon squad who attempted to sic the DOJ on GOP donor Harold Simmons and sought his prosecution for funding the ad. In a parallel effort launched the same week as Bauer's legal efforts, a nonprofit called "Accountable America," spearheaded by a former operative of the Obama-endorsing MoveOn outfit, began trolling campaign finance databases and targeting conservative donors with "warning letters" in a thuggish attempt to depress Republican fundraising.

It was Bauer who tried to bully television stations across the country into pulling the spot. Team Obama then summoned their troops to bombard stations, many of them owned by conservative-leaning Sinclair Communications, with 93,000 e-mails to squelch the commercial.

With Bob "The Silencer" Bauer now working from the inside and Anita "News Commissar" Dunn working from the outside, Obama has a state media police apparatus the Chinese regime itself could love.