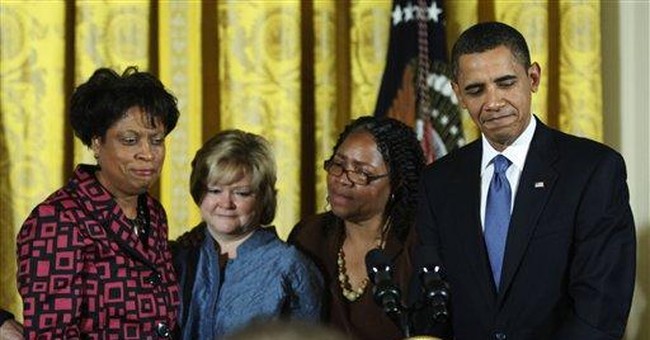 Like Capt. Renault in "Casablanca," I am shocked, shocked to discover that access peddling is going on in the Obama White House. Perks for deep-pocketed donors? Presidential meetings for sale? The stale Chicago odor of pay-for-play wafting from 1600 Pennsylvania Avenue? Knock me over with a feather.

Despite the president's claimed distaste for the campaign finance practice known as "bundling" (rounding up aggregate contributions from friends, business associates and employees), the House of Obama has been a campaign finance bundlers' paradise from Day One. A new report by Matthew Mosk of The Washington Times just confirms the gob-smackingly obvious: It's business as usual in the era of Hope and Change. O's wealthiest Democratic donors have received lavish receptions, golf outings, bowling dates and movie nights with Obama.

And internal Democratic National Committee documents acquired by the Times reveal that "high-dollar fundraisers have been promised access to senior White House officials in exchange for pledges to donate $30,400 personally or to bundle $300,000 in contributions ahead of the 2010 midterm elections." Yup, they're just haggling over the price.

Many Obama bundlers have secured slots on federal advisory panels and commissions. Still more have benefited from the time-honored patronage tradition of rewarding political benefactors with ambassadorships. Clinton did it. Bush did it. And despite all his fantastical, Balloon Boy-level rhetoric of bringing a "new politics" to Washington, Obama's done it, too.

In June 2008, candidate Obama railed: "We need a president who will look out for the interests of hardworking families, not just their big campaign donors and corporate allies." Immediately after the speech, he headed to a campaign fundraiser at the Manhattan headquarters of Credit Suisse, one of the major investment companies caught up in the subprime lending debacle. President Obama collected $3 million last week at another Manhattan fundraiser after carping about Wall Street's "self-interestedness." Audacity is his middle name.

When Obama inveighs against Wall Street greed and politicians beholden to Big Business, remember this: The Wall Street gamblers that Obama and his wife carped about on the campaign trail shoveled money to his campaign hand over fist. According to the Center for Responsive Politics, hedge funds and private equity firms donated $2,992,456 to the Obama campaign in the 2008 cycle. No fewer than 100 Obama bundlers are investment CEOs and brokers: Nearly two dozen work for financial giants such as Lehman Brothers, Goldman Sachs or Citigroup.

In 2003, USA Today reported, Reynolds was caught on FBI wiretaps arranging what prosecutors called a "sham" consulting contract with a gal pal of a Philadelphia mayoral adviser. After the conversations, Reynolds snagged $300,000 in no-bid city contracts for Loop Capital Markets. City officials went to jail over the scam. Reynolds skated. The Obama campaign's only statement? "Jim Reynolds has admitted that he made mistakes, but he has not been charged with any wrongdoing."

Fortunately for Obama bundlers who may find themselves in legal trouble in the future, Clinton-era donor-maintenance fixer Eric Holder (who oversaw the pardon for fugitive financier Marc Rich) is guarding the henhouse at the Justice Department.

Every corner of the Obama administration is stuffed with crony moneybags. Take the first lady's social secretary, Desiree Rogers. More than a party planner, she's a fundraising machine in her own right. According to left-wing watchdog Public Citizen, Rogers bundled more than $200,000 for Obama and contributed $28,500 to Democratic committees. Rogers' ex-husband, John W. Rogers Jr., chief executive of multibillion-dollar Ariel Capital Management, played basketball with Michelle O's brother, Craig Robinson, at Princeton. Mr. Rogers also served as a campaign finance bundler for Team Obama -- and hung with Obama in the White House on Super Bowl Sunday.

An indignant White House says this is about "friendship," not influence peddling. But as Obama himself noted in 2007: "It is no coincidence that the best bundlers are often granted the greatest access, and access is power in Washington."

Indeed, the Obama White House policy can be summed up in four words: No Bundler Left Behind.