All the President's Olympic Cronies 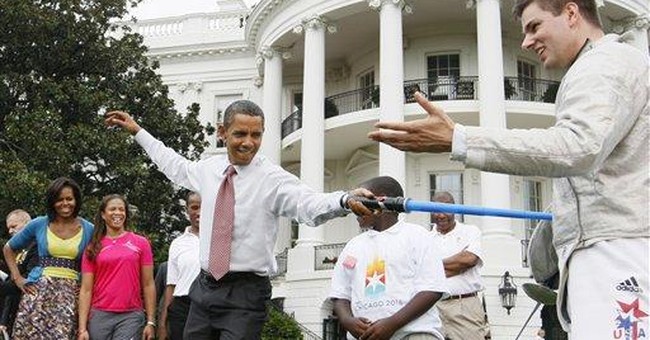 When government officials play the Olympic lottery, taxpayers lose. That has been the disastrous experience of host cities around the world. (Forbes magazine even dubbed the post-Olympic financial burden the "Host City Curse.") So, why are President Obama and his White House entourage headed to Copenhagen, Denmark, this week to push a fiscally doomed Chicago 2016 bid? Political payback.

Bringing the games to the Windy City is Chicago Mayor Richard M. Daley's "vision." The entrenched Democratic powerbroker -- in office since 1989 -- would like to cap off his graft-haunted tenure with a glorious $4 billion bread-and-circuses production. The influential Daley machine backed Barack Obama for the presidential primary. Obama lavished praise on Daley's stewardship of the city. Longtime Daley cronies helped pave Obama's path to 1600 Pennsylvania Avenue. Now, they're returning the favor for their hometown boss.

Senior White House adviser and Obama consigliere Valerie Jarrett is a Daley loyalist who worked as his deputy chief of staff, deputy corporation counsel and planning commissioner. She hired the future first lady of the United States, then-Michelle Robinson, as a mayoral assistant. Jarrett went on to serve as president and CEO of The Habitat Company, a real estate firm with a massive stake in federally funded Chicago public housing projects.

One of those public-private partnerships, the Grove Parc Plaza Apartments, was run into the ground under Jarrett's watch. Federal inspectors graded the condition of the complex a bottom-of-the-barrel 11 on a 100-point scale. "They are rapidly displacing poor people, and these companies are profiting from this displacement," Matt Ginsberg-Jaeckle of Southside Together Organizing for Power, a community group that seeks to help tenants stay in the same neighborhoods, told the Boston Globe last year. "'The same exact people who ran these places into the ground,' the private companies paid to build and manage the city's affordable housing, 'now are profiting by redeveloping them.'"

Coincidentally enough, Grove Parc -- now targeted for demolition as a result of years of neglect by Obama's developer friends -- sits in the shadows of the proposed site of the city's 2016 Olympic Stadium. Jarrett served as vice chair of Chicago's 2016 Summer Olympics bid committee before moving to the White House, where she has helmed a new "White House Office on Olympic, Paralympic and Youth Sport" with an undisclosed budget and staff.

It's not just taxpayers in cash-strapped Chicago who should be worried about this field of schemes. Crain's Chicago Business reports that Jarrett and Chicago 2016 committee member Lori Healey met this month with federal officials at the U.S. Department of Housing and Urban Development "to discuss financing options" for the estimated $1 billion Olympic Village.

The door is open, and the administration is "willing to meet and listen" to any federal subsidy proposals, Jarrett said. Hey, what happened to Obama's tough rules on interest-conflicted lobbying by his administration officials?

A majority of Chicagoans who live in pay-for-play-plagued Cook County oppose public funding for the Olympic party. The city has more than a half-billion-dollar deficit -- and just received word that its Olympic insurance policy will cover only about $1.1 billion of the $3.8 billion operating budget drawn up by Daley. Cost overruns, fraud and union-inflated contracts are inevitable. White House spokesman Robert Gibbs defended Obama's all-out campaign for Chicago's 2016 Olympics bid by claiming America will see a "tangible economic benefit."

But as is always the case with sports corporate welfare disguised as "economic development," an elite few will benefit far more than others.

Take senior White House adviser and Obama campaign guru David Axelrod. He's been a Daley loyalist since 1989, when he signed up as a political consultant for the mayor's first run. Axelrod's public relations firm, Chicago-based AKPD Message and Media, has pitched in work for the Chicago 2016 committee. It is unknown how much AKPD has received for its services -- or how much they'll make in future income if the bid is successful. AKPD currently owes Axelrod $2 million.

The head of the Chicago 2016 bid committee is Patrick Ryan, chairman of the Aon Corporation and a co-chair of Obama's deep-pocketed presidential inaugural committee. Also on both of those committees: Obama confidante Penny Pritzker, who, in addition, chairs the Olympic Village subcommittee and is president of Pritzker Realty Group -- a mega-developer in Illinois that could reap untold millions in project work if the Daley machine/White House campaign succeeds. Former Pritzker executive and Obama campaign treasurer Martin Nesbitt is also on the bid committee -- and serves as Daley's chairman of the Chicago Housing Authority.

Another bid committee member, Michael Scott Jr., is "trying to develop a for-profit real estate project that would sit within feet of the cycling venue if Chicago wins the 2016 Summer Games," according to the Chicago Tribune.

It takes a crony-filled White House to raise a Chicago Olympic village. Daley and Obama will get the glory. America will get stuck with the bill.