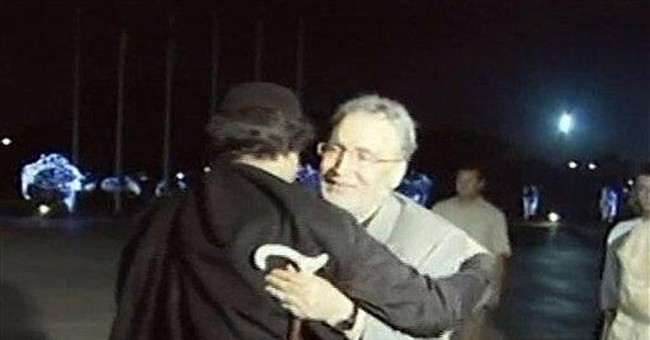 How much more suffering does the Obama administration want to inflict upon American relatives of the Lockerbie bombing murder victims?

Watching Lockerbie terrorist Abdel Baset al-Megrahi walk free after serving a measly eight years of a life sentence was cruel enough. Next, Lockerbie families endured the despicable hero's welcome party thrown for Megrahi by Libyan thug Moammar Gadhafi. Soon after came reports that Megrahi, released by Scotland for "compassionate reasons" due to terminal prostate cancer diagnosed by a lone anonymous doctor, may not actually have less than three months to live.

And now? Now, the Lockerbie families must prepare for the sight of Gadhafi jetting to New York City for a thug-of-the-month speech at the United Nations General Assembly in September -- topped off by a planned jaunt to Englewood, N.J., where the murder-stained jihadi financier wants to pitch a swank, air-conditioned Bedouin tent to greet well-wishers.

The civil liberties crusaders who fret over America's "inhumane" treatment of Gitmo detainees with smoke in their eyes have shown no compassion for the loved ones of Lockerbie murder victims getting kicked in the teeth.

New Jersey was home to 38 of our fellow Americans who lost their lives on Pan American Flight 103 in 1988. Fifty-nine of those murdered in the bomb attack called New York home. A total of 189 Americans perished over Lockerbie. And as we will soon commemorate two weeks from now, New York City, Shanksville, Pa., and Washington, D.C., witnessed 3,000 men, women and children slaughtered in the name of Allah firsthand.

Could there be a more twisted form of torture for terror victims' families than being forced to watch a silk-clad Gadhafi celebrate in their backyard as Islamic jihadists worldwide snicker?

A backlash against Moammar's Great Adventure is building. It's better late than never. "I want him barred from New Jersey," thundered Democrat Rep. John Adler. Englewood Mayor Michael Wildes stated the obvious: "This man embraced a convicted terrorist and is, at his core, a financier of terrorism himself."

Which begs the question: Why allow him to set foot on U.S. soil at all? Entry into this country is a privilege, not a right. Yes, America is party to an agreement with the United Nations to issue visas to foreign leaders participating in U.N. General Assembly meetings. But those visas are not absolute entitlements.

Ronald Reagan's Secretary of State George Schultz denied entry to Palestine Liberation Organization leader Yasser Arafat in 1988 over his jihadi ties. Schultz drew the line despite global outrage from Arafat's enablers. And Heritage Foundation analyst Nile Gardiner points out that under Article IV of the 1947 agreement, approved by the U.N. General Assembly, "the United States retains full control and authority over the entry of persons or property into the territory of the United States and the conditions under which persons may remain or reside there."

Barack Obama promised not to deliver another four years of Bush policies. The Bush State Department granted visas to America-bashing autocrats Hugo Chavez and Mahmoud Ahmadinejad. But instead of bringing an end to the dictator welcome wagon, Obama's feckless bureaucrats at Foggy Bottom are scurrying to accommodate Gadhafi's camping trip while respecting the "raw sensitivities" of the Lockerbie victims' families.

Cape May, N.J., resident Susan Cohen, whose 20-year-old daughter died over Lockerbie, cut through the diplomatic bull. "This is what happens when you have the path of appeasement," she told the press this week.

It is a path paved with blood, tears, lies and craven obeisance to "world opinion" at the expense of American innocents.