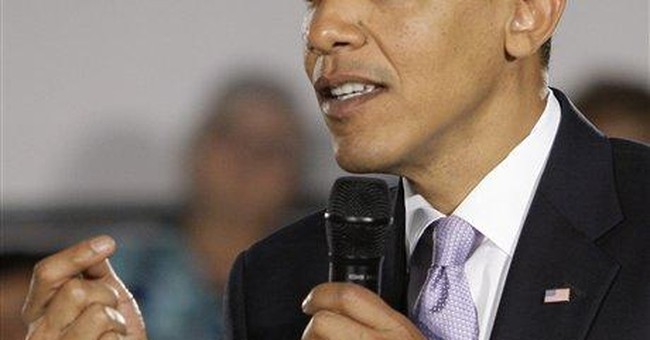 The White House sure likes to put on a show. Fresh off its joint stage production with ABC News, the Obama administration broadcast another health-care propaganda play this week under the guise of a citizen "town hall."

Chicago consigliere and senior adviser Valerie Jarrett managed the floor and human props for Obama. In a telling moment as the event kicked off, she protested a wee bit much: "I want to emphasize that the president has not seen the questions ahead of time." The audience responded with polite laughter.

But the denials of pre-planning and stacked decks deserve nothing but derisive mockery. Obama's town hall was filled with backroom players and a supporting cast of socialized medicine activists and ideologues. One of the three lucky audience members whom Obama chose for questioning was Jason Rosenbaum. Rosenbaum works for the Washington, D.C.-based Health Care for America Now (HCAN). That's the same K Street Astroturf outfit I reported on last week -- the one with a $40 million budget to lobby for government-run health care. The one inextricably linked to left-wing billionaire George Soros.

Let's look at who else miraculously drew a golden ticket. Another one of the three softball-tossing citizen questioners at the White House forum identified herself as a member of the Service Employees International Union. That's the same SEIU whose president, Andy Stern, boasted of spending nearly $61 million in members' dues to elect Barack Obama. It's the same union that produced Patrick Gaspard, former SEIU health-care lobbyist and now White House director of the Office of Political Affairs.

But the Obama health-care town hall's climactic moment came when the consoler in chief plucked Debby Smith from the crowd to tell her personal health-care horror story. She choked back tears as she talked of her battle with kidney cancer, her joblessness and her lack of insurance. Obama hugged the trembling woman and dubbed her "Exhibit A" for his massive entitlement program.

Debby Smith, however, is no ordinary patient. While she may be "unemployed," she has been rather busy working for the Obama campaign -- as a volunteer for Organizing for America. It's the old Obama for Change political machine now housed under the Democratic National Committee. Smith has also identified herself as a worker for the Virginia Organizing Project, which has been coordinating lobbying trips and health-care forums with HCAN. Yes, that same HCAN.

In December, Smith moderated "a community discussion on health care issues" in Appalachia, Va., and told her local paper that the meeting "would be reported back to former Sen. Tom Daschle, who has been directed by President-elect Barack Obama to form a committee to report on health-care issues."

Daschle may be out of the spotlight since his Health and Human Services Cabinet-nomination fiasco. But he is in constant contact with Team Obama. As he told The Associated Press earlier this week in a media meeting on health-care reform, "We interact with them daily." No doubt.

Veteran liberal journalist Helen Thomas earned some accolades for challenging the tightly controlled White House events. But where was she back in March, when Team Obama pulled the same stunt? At a health-care event in the East Room, the questioners included an Obama donor, a Democratic National Committee member, a former Democratic candidate for the Virginia statehouse who had publicly endorsed Obama and a member of the SEIU. Yes, that SEIU.

The growing irritation of the once-smitten Beltway media is better late than never, I suppose. But one wonders what took so long for the sedatives to wear off the watchdogs. Team Obama has screamed "kabuki" from day one.