Queen Nancy: Fly as I Say, Not as I Fly 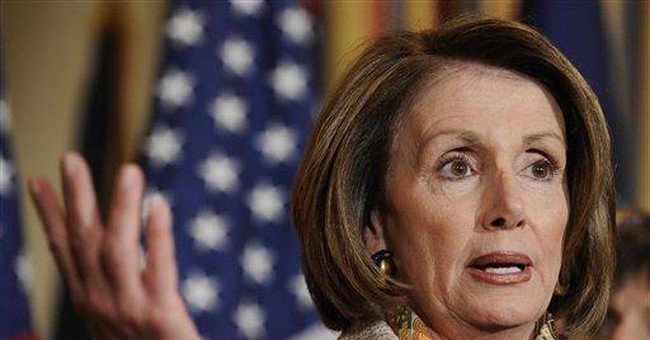 Democratic Speaker of the House Nancy Pelosi is the Jennifer Lopez of congressional travel -- fickle, demanding and notoriously insensitive to the time, costs and energy needed to accommodate her endless demands. On Tuesday, the indispensable government watchdog Judicial Watch released a trove of public records through the Freedom of Information Act on Pelosi's travel arrangements with the U.S. military.

As speaker of the House, Pelosi is entitled to a reasonable level of military protection and transport. But it's the size of the planes, the frequency of requests and last-minute cancellations, and the political nature of many of her trips that scream out for accountability.

And, of course, it's the double-barreled hypocrisy. There's the eco-hypocrisy of the Democratic leader who wags her finger at the rest of us for our too-big carbon footprints, and crusades for massive taxes and regulation to reduce global warming. Then there's the Bay Area hypocrisy of the woman who represents one of the most anti-military areas of the country soaking up military resources to shuttle her (and her many family members) across the country almost every weekend.

Remember: Pelosi's San Francisco is notorious for banning the Marines' Silent Drill Platoon from filming a recruitment commercial on its streets; killing the JROTC program in the public schools; blocking the retired battleship U.S.S. Iowa from docking in its waters; and attacking the Navy's Blue Angels -- which left-wing activists have tried to banish from northern California skies for the past two years.

Apparently, those anti-war protesters have no problem with evil military jets currying Pelosi and her massive entourages to the funerals of the late Rep. Stephanie Tubbs Jones and Charlie Norwood; foreign junkets to Rome; and politicized stops to Iowa flood sites to bash the Bush administration. One exasperated Department of Defense official, besieged with itinerary changes and shuttle requests back and forth between San Francisco International Airport and Andrews Air Force Base for Pelosi, her daughter, son-in-law and grandchild, wrote in an e-mail:

"They have a history of canceling many of their past requests. Any chance of politely querying (Pelosi's team) if they really intend to do all of these or are they just picking every weekend? … (T)here's no need to block every weekend 'just in case.'"

Another official pointed out the "hidden costs" associated with the speaker's last-minute changes and cancellations. "We have … folks prepping the jets and crews driving in (not a short drive for some), cooking meals and preflighting the jets etc." Upset that a specific type of aircraft was not available to her boss, a Pelosi staffer carped to the DoD coordinators: "This is not good news, and we will have some very disappointed folks, as well as a very upset speaker."

Three months ago, turmoil erupted over Queen Nancy's demand for the military to reposition her plane to fly out of Travis Air Force Base in Fairfield, Calif., closer to where she had "business," instead of San Francisco Airport/SFO (1.5 hours away). A special air missions official wrote: "We have never done this in the past. The deal is … that the Speaker shuttle is from D.C. to SFO and back. We will not reposition. We do not reposition for convenience even for the SECDEF. It is not (too) far of a drive from Travis to SFO. Did the escort suggest to the speaker that this is OK? If so, I hope you guys correct them immediately. If you agree with me that I am correct, then you need to stay strong and present the facts to the speaker's office."

Another official stated bluntly: "We can't reposition the airplane such a short distance. It is not a judicial use of the asset. It is too expensive to operate the jet when there is truly no need to do so."

A beleaguered colleague responded: "(Y)ou know I understand and feel with you … but this is a battle we are bound to lose if we tell the speaker office. In the end, this is what will happen. … I wish that I could say this is a one-time request, but we know it will probably happen again in the future."

In the end, the military won that battle. But a few days later, Pelosi was back with a new demand: that her military plane taking her from D.C. to San Francisco make a stop in New Jersey to bring her and three Democrats to an "innovation forum" at Princeton University involving 21 participants and no audience. A Gulfstream jet was secured for the important "official business."

No word on whether Pelosi required vanilla-scented candles, Evian water and fresh white lilies aboard the flight. But rest assured: Air Diva traveled in style, courtesy of your tax dollars and the forbearance of the U.S. military.