Those Foreclosure "Victims" Deserve No Sympathy 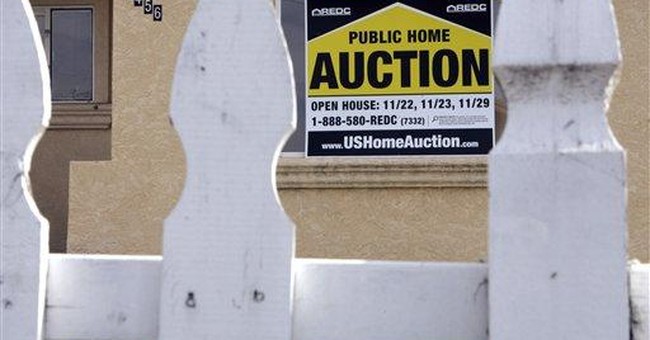 It shouldn't be long before ACORN recruits "Octomom" Nadya Suleman to serve as the radical left-wing group's foreclosure poster child. The jobless, unmarried mother of 14 faces eviction from her home in two weeks. Suleman's mother, who owns the residence, hasn't sent a mortgage check in 10 months and owes $23,000 in back payments. Nonetheless, the plastic surgery-enhanced, welfare-dependent Octomom was photographed this week at a video store splurging on games for her brood.

With her warped financial priorities, Suleman fits right in with the militant moochers at the Association of Community Organizations for Reform Now. As I reported last week, ACORN launched a lawless "civil disobedience" campaign across the country to demand their housing entitlement rights. With this well-oiled propaganda campaign buoying his efforts, President Obama used his State of the Nation address last night to advance his push for a massive government home foreclosure plan that will help "responsible homeowners avoid foreclosure."

But a closer look at ACORN's sob stories shows that the prototypical foreclosure "victims" don't deserve an ounce of sympathy -- or a cent of our money.

Earlier this week, ACORN activists broke into a foreclosed home in Baltimore. With a mob cheering and camera crew taping, Baltimore ACORN leader Louis Beverly busted a padlock and jimmied the door open at 315 South Ellwood Ave. The home once belonged to restaurant worker Donna Hanks, who assailed her evil bank for raising her mortgage by $300 and leaving her on the street. "This is our house now," Beverly declared with Hanks by his side at the break-in.

The property initially went into foreclosure proceedings in the spring of 2006. Hanks soon filed for bankruptcy and agreed to a Chapter 13 plan to pay back her bank and other creditors. In September 2006, the bankruptcy court ordered Hanks' employer to deduct $340/month from her salary to pay down the debt. Hanks did not comply with the legally binding plan. In December 2007, the loan servicer issued a notice of default on nearly $7,000 past due.

While she was reneging on her mortgage IOUs, she somehow managed to collect rent on her basement (for which she was taken to court) and rack up a criminal record on charges of theft and second-degree assault. The house was sold seven months ago after two years of court-negotiated attempts to allow Hanks to dig herself out of her debt hole.

Beverly, who claims to be a foreclosure victim himself, was charged with burglary for the break-in and released. He is literally a housing thug -- having been separately charged with second-degree assault and property destruction earlier this year; battery, assault, handgun possession and possession of a deadly weapon with intent to injure in 1992; and slapped with a peace order issued against him in 2006.

The Washington Post spotlighted Beverly's and Hanks' activism without following up on their criminal records and financial negligence. The paper also shilled for ubiquitous ACORN foreclosure "victim" Veronica Peterson of Columbia, Md., recycling uncritically her accusation that she had been tricked into buying a $545,000 home by a broker who inflated her income and misrepresented her assets. "These loans were weapons of mass destruction," the single mom of three and home day care provider who couldn't keep up with her mortgage bills told the Post reporter. "They destroyed our credit, our lives, and they blew up in our face."

But a look at court and real estate records exposed the truth. Edward Ericson Jr., a reporter for the independent Baltimore City Paper, discovered that the "victim" -- who took out a full mortgage with no down payment on a house she couldn't afford -- looks more like a predatory borrower. And amazingly, Peterson lived in the home more than year without paying rent or mortgage.

"The online court and land records show that Peterson closed on the house on Nov. 3, 2006, with two loans from Washington Mutual. The main mortgage, for $436,000, had a starting interest rate of 8.5 percent, adjusting in December. … The second loan, often called a 'piggyback,' totaled $109,000 with an interest rate of 11.25 percent. … Those two payments together would have totaled $3,386.17 per month. That's before property taxes, upkeep, utilities, etc. Peterson would have to earn at least $50,000 per year just to make her house payments."

Who are the real suckers? Who are the true victims? If only the reporters swallowing their stories were half as diligent about background checks of ACORN thugs as they were with Joe the Plumber.